Yikes! Did you think we were serious? Time to say goodbye to the old header and subtitle.

Barry and I once knew a couple on a sailboat who set off cruising with a table saw chained to their mizzen mast. The boat was not complete, but after many years of building, it was seaworthy. They would finish their projects along the way.

That couple gave us a valuable word for our vocabulary: “Fernow.”  As in, “It’s good enough for now.” Fernows explain why we make do with things that are pinned instead of sewn, cardboard instead of wood, funky instead of nice. They are the temporary installations that we never intended to use for the next decade.

That’s the case for mepsnbarry.com. In 2003, Barry and I created a website for our friend Brian, and I wrote my very first blog post:

There once was a sailor named Brian
Fell in love with a vessel named Cayenne
From his home way up north
He boldly went forth
Now he’s bitchin’ and moanin’ and cryin’!

Barry and Brian and I chronicled our adventures aboard Cayenne in New Orleans and our cruise to Baltimore, much of it in limerick form. Fourteen months later, Limericks #48 and #49 tell the end of the story:

We’re tanned and our feet are like leather
We’ve seen lots of glorious weather
After 2000 miles
We’ve run out of smiles
We can sail, but we can’t live together.

So Margaret and Barry are blue
And Brian is looking for crew
When we reach our next port
Its time to abort
And figure out what else to do.

Remember when fernow websites were full of these?

Suddenly, our writing was homeless, so we quickly launched Adventures With Meps ‘n’ Barry, using a cute but temporary design. The stylesheet had bugs. The layout was funky. The navigation was kludgy. It was a fernow.

Despite that, Adventures with Meps ‘n’ Barry is thriving. In a world where millions of blogs have been started and abandoned, where people have nothing better to blog about than blogging itself, Barry and I have something very, very special: Content. Eleven years of valuable, original content.

We have over 600 entries, with stories, photographs, videos, and hundreds of limericks. We have useful information about how to build a junk rig and how to write a birthday limerick. We have guest poems. We have so many recipes, we had to spin them off into their own website (FoodieGazette.com) in 2006.

These are not personal diary entries or trip reports. These are thought-provoking stories with meaning, stories about the people we met along the way. Some are touching, many are funny. Some are both. This is the material that inspired my book, Strangers Have the Best Candy.

I am reminded of a story about a woman who always wanted to play the violin, but at 60, she thought she was too old. When she turned 90, she expressed her regret, saying, “I would have played the violin for 30 years by now.”

I am deeply glad that I started writing like this when I did. In eleven years, I have refined my voice and found some wisdom along the way. Figuratively, I have been playing the violin. 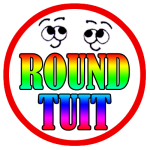 The best thing to replace a fernow

Fortunately, I never let the fernow stop me from writing, from compiling my limericks, stories, photos, and videos on a “blog.” They are all here. Today, you and your friends — heck, the whole world! — can enjoy them, because we finally got something to replace the fernow: A “round tuit.”

(By the way, you may notice something a little different about Barry in the cartoon at the top. He cut his long hair in 2005, the night before we set off on our epic Alaska-Yukon adventure.)

9 thoughts on “Yikes! Did you think we were serious?”