The chances of finding a favorite Seattle friend living in Morehead City were so miniscule, we thought that Hell would freeze over first. We caught up with Kevin in December — he’d been living here for 3 years, and Flutterby’s been here for 2 years. On February 13th, when he came out to see the boat for the first time, Hell froze over, as evidenced by the photo below.

From Seattle, friend Kevin is witty,
But we’d got out of touch, what a pity.
But then Hell did freeze over,
For this fine Irish Rover,
Has been living in wee Morehead City. 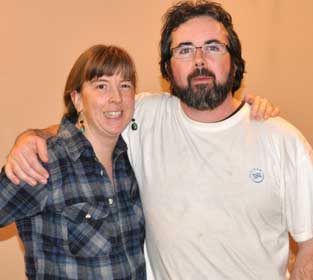 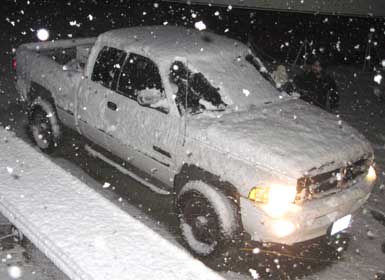 Left: Meps and Kevin, Right: There was no snow when Kevin arrived at the boat. After dinner, here he is (on the far side) cleaning off his truck.