The first time they tried to get us to row ashore, it was too windy. Flutterby was humping and seeking in the howling winds leftover from a major storm system that had wrecked havoc and tornadoes across the south. Barry went up on deck to check on the situation, and to my surprise, I heard him talking to someone.

He came back down, shaking his head. “A nice lady on the dock invited us over for a glass of wine,” he said.

“Wow. It looks so close, but it’s a million miles away, isn’t it?” I replied.

We were barely 100 feet from a private dock in front of a condo building, but it would have been impossible to launch the dinghy in those winds without damaging it, Flutterby, or a member of the crew.

The next day, the winds calmed a little, and we were able to row ashore for a new GPS. We used the dinghy dock at the marina, further up the creek, which meant a more difficult row against a 2-knot current. It was a grumpy day, because we spent way too much money (for you landlubbers, a “boat buck”=$1K) at West Marine.

When we got back to Flutterby that evening, we wearily hauled the dinghy up on deck and tied it down. My mind was set on an early bedtime and a pre-dawn departure.

On the dock, a man called to get my attention. “Would you like to come over for a glass of wine?” he shouted.

If only he’d called out 10 minutes earlier, before we got the dinghy out of the water, I might have said yes. But I shook my head. “No thank you,” I answered.

He persisted, having noticed our home port. “Our daughter lives in Seattle.”
“Where?”
“On Capitol Hill.”
We conducted a surprising but difficult conversation over the wind. His daughter lives very close to the house we owned for 10 years.

“I’m not originally from Seattle!” I shouted. I told him that my parents had built a house on an island just up the road from here, Harbor Island.

“What’s your Dad’s name?” he asked.
“Schulte!”
He threw his head back, laughing. “I WAS AT YOUR WEDDING!”

I peered closely at the white-haired gentleman on the dock, who I hadn’t seen in 20 years. Then I stuck my head down the companionway. “Barry! We have to launch the dinghy again! That’s Tom Mikell on the dock!”

We launched the dinghy and rowed the short distance. Tom was waiting for us with a glass of wine in a condo on the ground floor, Flutterby perfectly framed in the french doors of the living room.

The three of us sat down and started getting caught up. “Wait ’til my wife comes back from yoga. She’s going to be amazed. She was disappointed when you wouldn’t come over yesterday.” 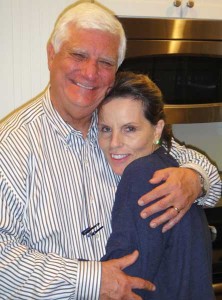 Mary Ann came back a little while later, and Tom met her at the door. “We have guests, honey. Remember those folks on the sailboat?”

“Great! You got them to come over!” She greeted us with a big smile and a hug, and Tom teased her about his ability to lure us over when she could not. Then he burst out, “Guess who was at their wedding!” She shook her head, “Who?”

Tom pointed to himself.

All three of us grinned at her. She stared at us in disbelief, then checked the wine bottle. “What have you been drinking?”

“It was twenty years ago,” I chimed in.

With all three of us talking at once, we explained the strange coincidence, the fact that Tom had known my parents very well, that we had gotten married at my parents’ house in a memorable and unusual ceremony. “Do you remember that there was a sailboat on top of the cake?” I said to Tom. Back then, we owned a 14-foot daysailer and dreamed of someday cruising on a “big” boat.

Tom and Mary Ann have been married for just about a year, and they are a wonderfully-matched couple, excellent story-tellers who share a lively sense of humor.

“I met your Mom and Dad at a party on Harbor Island,” said Tom. He’s an attorney who represented the Harbor Island Owners’ Association, an organization my Dad practically ran for a while. “When I got there, everybody was drinking and carrying on, and your Mom had this party game, where she was studying peoples’ handwriting.”

I cracked up laughing. Mom’s ability and belief in handwriting analysis were legendary in my family. Any time my siblings or I brought home a new boy- or girlfriend, Mom demanded a sample of their handwriting to analyze and make sure they were a good person. Barry evaded her scrutiny only because handwriting analysis requires cursive writing, and he prints everything.

“So your Mom studies this sample of my handwriting,” continued Tom, “and with everybody at the party watching, she looks at me and says, ‘Hmm, dishonest…’ and everyone at the party starts laughing their heads off! ‘See these loops here, and the way the i’s are dotted…dishonest, very dishonest. Must be a lawyer.’ I must admit, I was not pleased,” said Tom. He scowled playfully.

Luckily, Tom laughs about it now. He forgave my mother and enjoyed many good times with both my parents. He described a time when Harbor Island was a tight-knit community of young, vibrant retirees who hung out together on the beach, went boating, and had a lot of parties.

“Remember the whale?” he said.

That’s another legendary story — in 1987, a 65-foot whale beached herself on Harbor Island, which folks in Beaufort call “an overgrown sandbar.” My family was walking on the beach that afternoon and was the first to come across the giant creature, who was euthanized after a couple of days. Then there was the problem of what to do with a rotting 65-foot whale — one of Tom’s more interesting legal cases.

A group of experts cut the whale up into pieces with chainsaws, and the island owners hired a man with a bulldozer to bury them. But Mother Nature had other ideas, and a couple of weeks later, the rotting pieces started popping up out of the sand.

“I guess they just buried it deeper,” said Tom. “No, I heard they put concrete on top,” I said. Neither of us had heard of rotting whale pieces on Harbor Island after that.

We spent the entire evening with Tom and Mary Ann, talking about everything under the sun. We even walked over the Upper Crust for some dinner — my Mom’s favorite pizza place when she was alive. Once in a while, one of the four of us would shake our heads and marvel at the coincidence and history that brought us together. “You look like your Dad,” said Tom, a very high compliment indeed.

One reason our wedding was memorable was because it was all about magic and sailing. It was magic and sailing that brought us together with Tom and Mary Ann for the evening — but I can’t believe it took 20 years. Now that we know where to find them, we’ll be back a lot sooner to anchor in Factory Creek and row ashore for a visit.