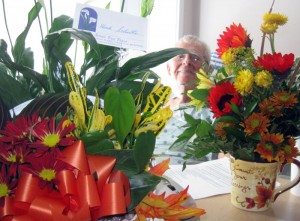 Dad in the hospital, surrounded by flowers from well-wishers

I’ve just spent almost 3 weeks with my Dad in Florida. I’ve been wanting to write about him all this time, but what to say? Should I tell you about the books by Henry H. Schulte, Jr.? Or the newspapers he’s managed and edited? The thousands of students he’s taught and mentored? What about his children, or the adventures we had with him?

There’s so much to say, I never got around to writing anything.

So I was sitting on a Delta DC-9, ready to take off from Melbourne, Florida When looked out the window, there was a man standing on the ground wearing safety gear and holding a couple of orange flashlights. He waved. That was unusual.

Then I heard voices behind me. “Look, Sky, that man is waving at you.” I craned my head around to see a little boy, just a toddler, in the seat behind me. He was traveling with his parents, two people who looked surprisingly young to me.

From the conversation behind me, I figured out that it was Sky’s first ride in an airplane.

As the plane taxied and took off, Sky and his parents entertained me with their observations. When we took off, they told him to watch how fast we were going. Once we were airborne, he said, “Lookie! The sun is coming! The sun is coming!” A few minutes later, “Where’s our house? When will we land? Where’s Grandpa’s house? Are we landing yet? I don’t see Grandpa’s house.”

We ascended through a light cloud layer, and the view was one of the most beautiful skyscapes I’ve ever seen. The dark ground, lit by pinpoints of electric light, was softened by a transparent black veil. At the same time, the sunlight reflecting off the clouds made a bright ethereal landscape above.

I’ve really enjoyed having Sky behind me during the flight, despite the fact that he took me at my word when I told him he could kick my seat-back. He sang the alphabet song (but got confused at the end) and traced his letters on the window. “Big A, little A. Big B, little B…”

Sky’s joyful curiosity reminded me of my Dad, who I’d just left that morning at 5:20 am. Even though Dad is over 80 years older than Sky, and he just had open-heart surgery, he is just as vibrant as that little boy.

The first two days after Dad’s operation were scary to me. Dad was in the ICU, which I expected, but he was not himself, which I didn’t expect. The first day, he didn’t even wake up. The second day, he was awake but didn’t talk.

On the morning of the third day, I walked into the ICU with my brother, full of apprehension. Then I heard his voice. And I heard peals of laughter from his nurses.

For the next two days in the ICU, he pestered the nurses with questions about how the ICU worked and what the nurses were doing. He entertained them with his stories and his observations while they did their work. We joked about the fact that on Day Two, he had been making mooing noises because of the cow valve now implanted in his heart. Then we’d joke about the fact that it must have come from a bull, not a cow. The two of us were giddy and talkative. When the nurses saw me, they told me how lucky I am. 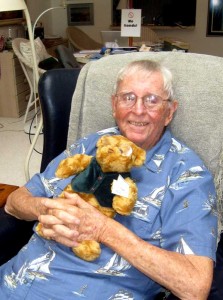 Dad used the teddy bear to protect his sternum after surgery

My Dad’s a lot like the little boy, Sky. He is full of curiosity about the way the world works, cataloging his finds and comparing them to his prior experiences. Sometimes he seems to say whatever pops into his head, like a little kid who doesn’t worry what other people will think. He can be very observant and oblivious at the same time. We laugh a lot together. He makes silly noises and sings silly tunes. He likes teddy bears.

In the past decade, I have heard over and over, “Your Dad is amazing for his age.” It’s not his age that’s amazing. It’s his little-boy way of experiencing the world, his natural ebullience. He’s always been like this.

For Sky, the little boy on the plane, I wish that life would always be like his first flight, that he would always feel like he could touch the sky with his joyful enthusiasm for life.

In my Dad, Henry, we have proof that it is possible for all of us. He’s touched the sky many times, and will continue to do so into his 90’s. If Dad can do it, we all can.

2 thoughts on “To touch the sky”