We’d put away the tools, cleaned the sanding dust, and moved a few things to storage to make the boat presentable. Dinner was cooking, and we had the makings for sangria. But as I looked around the boat, I worried about the next few days.

Would Dad be comfortable here with us? He has more room in his walk-in closet than we have in our combined living room, kitchen, dining room, and office. Would he like Beaufort? It’s a tiny little town, and we don’t know anybody here.

A friendly honk interrupted my survey, and I scampered down the ladder for a hug. Dad had driven from Florida to Myrtle Beach for a conference and get-together with journalist friends. A few more hours of driving brought him to Beaufort, where he planned to spend five days with us.

First, though, he had to master the ladder. Although Flutterby‘s centerboard makes her much lower than most of the sailboats in the yard, it’s still a daunting 8 feet to the cockpit. Then about 4 feet down the companionway to the interior.

Barry and I do it dozens of times a day, in the daylight and in the dark, with arms full of tools and groceries and boat parts. We’ve had occasional slips — at least three bruising incidents on the companionway. I also took some priceless video of Barry going down the big ladder facing forward. About halfway down, he lost his footing and slid plink-plink-plink down the rungs, making a sound like a xylophone and landing in a heap at the bottom. Only his dignity was hurt, which is why he grabbed the camera and deleted the video. 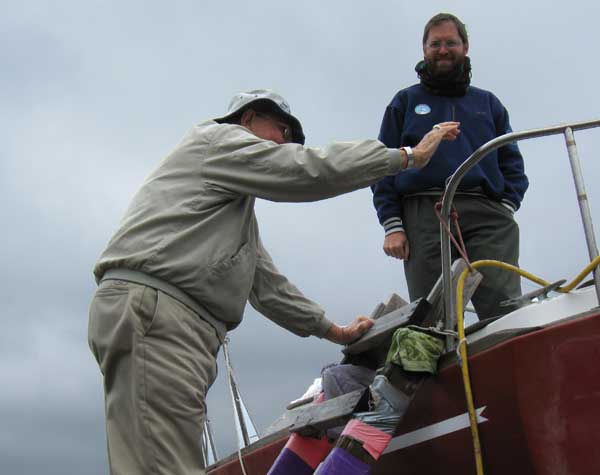 Anyway, Dad made it up fine with us hovering anxiously, and was soon ensconced in our salon. Over the course of the week, we spent lots of time there, talking, listening to music, and spreading out newspapers, books, laptops, notecards, food, and beverages. My fears were groundless — the only spatial challenge was vertical. At 6’2″, Dad’s head brushes the ceiling, and going into the head is like climbing into a hobbit-hole.

I had planned short daily expeditions to see local sights, like the Maritime Museum and Fort Macon, and I’d checked with our boatyard expert, Larry, for restaurant recommendations.

By Tuesday, the rain had cleared, and we were at the Backstreet pub, listening to a lively Irish band and eating corned beef and cabbage. We were having a blast when along came our neighbor, John. Then we struck up a lively conversation with a couple from the University of Tennessee, and the two professors found lots to talk about. John left, and along came our Burning Man friend, Jeff. All this, in a town where we don’t know anybody. 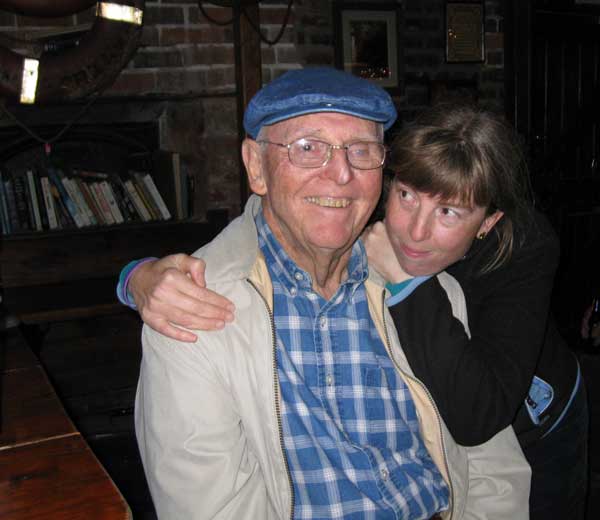 On Wednesday, I suggested we check out the live music advertised at the Sandbar. So we parked at Town Creek marina, and I noticed our friend Ted sitting in the cockpit of Ocean Gypsy with a friend.

I called down from the parking lot. “Hi! We thought we’d come over and check out the Sandbar this evening.”

Ted told us, “You’d better come have a drink with us instead.”

Ted and his neighbor, Ron, said the Sandbar was a great little bar and restaurant. But the couple who ran the place weren’t getting along, and the woman left. She took the liquor license with her! This resulted in the police coming out on Saturday and shutting the bar down.

As a result, we sat in Ted’s spacious cockpit and swapped stories about book-publishing and sailing and life until it was almost dark. Dad got to see what a properly-outfitted Freedom 33 looks like, and we got to know Ron, who’s recently published a book, Sailing With Carol. All this, in a town where we don’t know anybody.

On Thursday, we took a ferry ride to Oriental, which considers itself the “sailboat capitol of the world.” We stopped at a waterfront park on the way and ran into a couple who’d been on the ferry with us. Dad ended up in conversation with the husband, and Barry and I started chatting with the wife…were we standing there in the sunshine talking for 30 minutes, or 45?

On Friday, we went into Beaufort and strolled Front Street, stopping into a few shops. We were browsing in Rocking Chair Books when Ted came in to see the owner, Kelli. After he introduced us, we were chatting with Kelli, and in walked our neighbor, Oscar. All this, in a town where we don’t know anybody.

The funny thing is, Dad has an even older friend here in the area, but he told me they’d been out of touch for a while. When he looked up his friend in the phone book and called him, I could tell something was amiss.

Dad had asked for Woody Price. Unfortunately, Woody had died eight years before, and his 94-year-old widow never, ever called her husband “Woody” — only “Woodrow.” Once they straightened that out, they had a nice chat.

When Dad finally got off the phone, I asked him how long he’d been out of touch with the Price’s. “I got Christmas cards from them for years, with a painting of their little saltbox house,” he reminisced. Then he told me he’d last run into Woody by chance during a trip to the Outer Banks. His wife hadn’t been with him on that trip, though.

Later, I checked the family photos on my computer. Dad’s last trip to the Outer Banks had been in 1971. He hadn’t seen Woody for 38 years, and hadn’t seen Mary for over 40. With his incredible memory for details, he made it sound like it was yesterday.

So many friends, new and old, in a tiny town where we don’t know anybody.