Vero Beach is a very clean, pristine little town. Careful zoning prevents high-rises as well as any other ugliness. There are large, beautifully-landscaped homes owned by wealthy retirees as well as tidy smaller ones, where the hard-working younger set lives.

In addition to these neighborhoods, there are gated communities, protected from unwelcome riff-raff by fences and walls. These condo communities have additional rules to prevent unsightliness and untoward behavior by their own residents: No rollerblading. No pickup trucks. No open garage doors. Speed limit 10 mph. No soliciting. No one under 55. Pool chairs must be completely covered by a towel. No pets.

So how did these two grubby sailors from Flutterby, who are used to living in a boatyard, fare in pristine Vero Beach for five months?

We stayed in compliance easily, because nobody had thought to write rules about the things Meps and Barry will do.

One day, the neighbors found the front yard of Dad’s house completely full of soggy camping and kayaking gear. It was spread across the bushes, and Barry had tied clotheslines between the palm trees and the garage for our dripping jackets and pants. These remnants of a messy and disastrous Everglades camping trip were just a harbinger of the chaos to come. 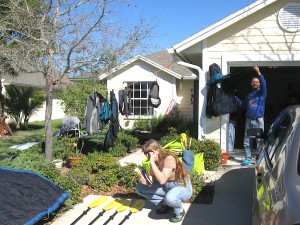 Luckily, nobody had written a rule against our soggy gear display. There is probably a rule agasint drying laundry, but it was not enforced.

Next, we tested the waters with a small project, refinishing the oars for the dinghy. I took them over to Dad’s backyard one afternoon. He wandered out of the house to see what I was doing, and he pulled up a chair to watch as I set up my sanding station. There were no sawhorses, so I compromised by propping the oars across a couple of folding chairs. Then I got out my random orbital sander and my red earmuff-style hearing protection. The sander is LOUD, especially since its bearings are in bad shape after all the fiberglass we’ve used it on.

Before I put the earmuffs on, I said to Dad, “I’m going to make a lot of noise now. You might want to go back inside.” “That’s OK,” he responded, “I’m way over here.” He was all of six feet away.

I just shook my head and started up the sander. The noise and sawdust didn’t phase him at all, and he kept me company until I finished the first oar.

Evidently, the project didn’t phase the neighbors, either. I’d just proven that his gated complex could handle a little bit of sanding, Meps-style.

After the oars were sanded, we suspended them in the garage and painted them with multiple coats of epoxy and paint. I worried that the fumes might get into the house, but it was well-sealed. None of the neighbors complained about that, either.

Then we went shopping with our friend Ann, and on top of her big Mothball van, we piled enough plywood and dimensional lumber to build a freestanding wooden lofting floor in the garage. All the sawing, screwing, and hammering still didn’t raise the ire of any neighbors, although Dad started grumbling about the loss of his garage for the car. 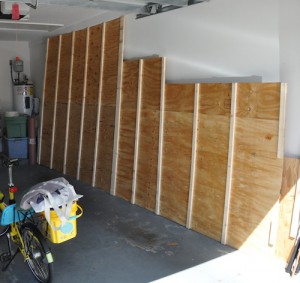 The lofting floor, ready to lay down

Over the next weeks, Barry set up first one, then two sewing machines in the garage. He made paper patterns and transferred them to fabric. Then he stitched them into sails, working late into the night. He closed the garage door at night to keep mosquitoes at bay, which helped keep us in compliance with the no-open-garage-door ruling. We were pushing that one.

We admired Mothball so much, Ann left the van in our care while she sailed her boat north to Maine. That was wonderful serendipity, allowing us to move vanloads of battens and yards across town without renting a truck. The longest battens are 18 feet, and they only stuck out of the van eight feet!

But surely, in the next phase, the neighbors would complain. They hadn’t written any rules against sanding aluminum or doing epoxy jobs in the driveway, but they probably should have. Any time you see your neighbor wearing a full-face respirator, he’s probably doing something he shouldn’t.

By now, the neighbors were blase about the stuff happening at Dad’s normally quiet, tidy house. They didn’t peer curiously into the garage any more when they walked their completely controlled pets on leashes. I’m sure there’s a rule about that. I wonder if that’s why one woman walks her cat on a leash.

Finally, all the irritating, rule-breaking projects were done. I posted a couple of ads on Craigslist and Freecycle, and obliging people came and took away all the lumber. One man was building chicken coops, and the other was building rabbit hutches. I doubt Vero Beach allows such critters; they probably came from outside the city limits.

We returned the borrowed sewing machine to our friend Linda. We loaded the tools, paint, and epoxy into plastic bins that would fit aboard the boat, along with the carefully-folded sails. The sewing table we carried back inside.

Then we stood back and looked at the garage, ready for Dad’s car.

There was no sign of the mess or noise that had completely taken over for almost three months. In fact, the garage looked better than before we’d arrived! Barry had installed a couple of ladder hangers for working on the battens. Now Dad’s ladder was neatly stored on them, instead of leaning precariously against the wall.

I breathed a sigh of relief.

We had made a BIG mess, and we had cleaned up all of it. This was in keeping with the biggest rule of all. Not a Vero Beach rule, or a condo complex rule, but a family rule: Do not mess up Dad’s house.

Someday, Dad will see our picture on the front of a sailing magazine. He can show his friends, saying “Look! These sails were made in my garage.” I have my fingers crossed that he’ll conveniently forget the sawdust and noise and chaos, and just remember my favorite part: How much we enjoyed his company for five months, the messiest Snowbirds in Vero Beach. 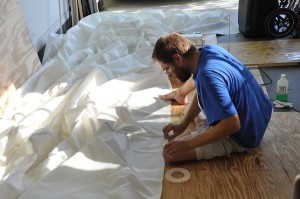 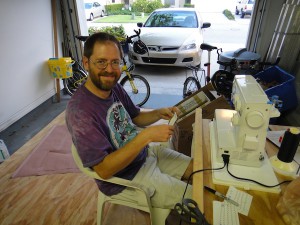 The car is outside, bikes and sewing machines are in 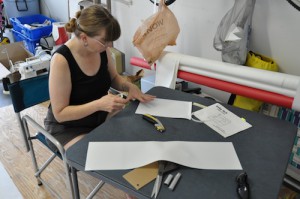 Meps at work in the garage 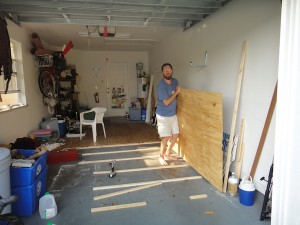 Taking the floor apart to give the lumber away 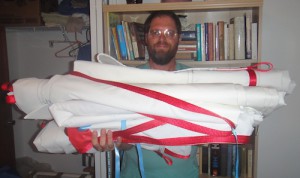 The end result of all that mess

3 thoughts on “There oughta be a rule”