Blame it on Barry and the bandsaw. 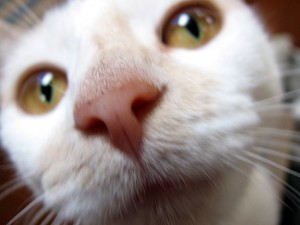 What happens if I stick my nose on the lens?

The morning after the kittens were almost born on Charlie’s head, Barry trotted over to Charlie’s trailer and asked to use the bandsaw. When he fired it up, Momma Kitty looked at him askance. Her eyes seemed to say, “What the heck do you think you’re doing? You’re hurting my kittens’ ears!” Never mind the fact that five hours after being born, the kittens’ ears were still stuck flat to their heads.

The next morning, I stopped to see Charlie and the kittens. “We have a kitten crisis,” he told me. “She took one of them away.” We looked at the cat and one remaining kitten sadly. RIP, I thought. Momma Kitty seemed more attached to Charlie and John and Barry and me than to her kitten. “Maybe if you sleep with her tonight, instead of on the boat, she won’t abandon the last one…” I suggested, hesitantly. I hated to ask that of Charlie, but he’s a hero. “I’ll do that,” he said, brightly.

The next morning, I stopped by, and it was deja vu all over again. “We have a kitten crisis,” he said. “She slept with me all night, but she took the other one away this morning. I tried to follow her, but she knew I was tailing her (har, har) and gave me the slip.”

I was a little more successful at tailing her, and I found where she’d stashed the kitten — under the back seat of John’s conversion van, which he’d left open to keep it cool and aired out.

This created a whole new set of problems. In order to buy groceries or do laundry, John needed to drive his van. But it was 100 degrees that day. If he carted the cats to Beaufort and locked his doors, he’d have two roasted cats under the rear seat. And if he did so without Momma Kitty on board, she’d be frantic while he was gone.

Then Barry went back to use the bandsaw. “What was that squeak?” he asked Charlie. I guess he thought one of Charlie’s power tools needed oiling.

Charlie couldn’t think of any power tools that made that sound. So they dug into a huge pile of toolboxes under a bunch of cabinets and found the source — the other kitten!

The family was reunited in John’s van, and then my slippery path to sainthood began. Nancy Bock and I looked all over the boatyard for a place to relocate the cats. But nothing seemed right. Finally, Barry and I decided to cat-nap the three of them and put them on our boat for the time being. 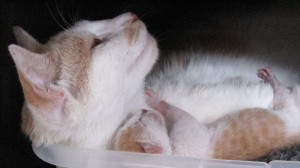 Since the kittens look exactly like Mom, we suspect it was a virgin birth

We walked over to John’s van with a large plastic tote, and Barry put on a fleece sweater in case Momma Kitty tried to scratch or bite. But she didn’t. He gently lifted her out, and she sat docilely in his arms as I put her two squeaky kittens in the tote. Then we walked across the boatyard, carried them up the ladder, and put the tote into a cozy, defensible spot in the quarterberth. Momma Kitty did a quick lap of the boat, proclaimed it acceptable, and climbed into the quarterberth to resume nursing.

It’s been a few days, and Momma Kitty now goes by the name, “Buttercup,” because of her sunflower-yellow eyes and her princess status. The two kittens haven’t been named; we call them the wiggle-worms. At one week old, their eyes are not yet open, although they do have ears now.

It’s a happy story, except for one thing — I have two weeks to find a place for them. My attempts to place the little group with a foster family, no-kill animal shelter, or permanent home have been unsuccessful. I have made numerous calls, posted ads, and sent emails. But if you are an animal, Carteret County is not the place for you! The Humane Shelter here is referred to as a “high-kill” facility.

The few volunteers in the area who work to save pets are desperately overloaded. I call their message phones, and most call back from restricted numbers. “We can’t help you,” they say. “We have too many cats already.” If I was the praying sort, I’d be praying for help about now. 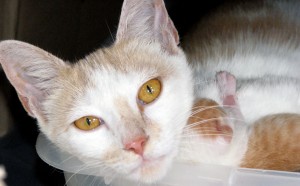 When do I get tuna?

So we’ll keep looking, and in the meantime, we’ll enjoy this snuggly, docile kitty and her two wiggle-worms. If you don’t want a pet permanently, let me suggest that you foster a cat or dog, wherever you are! I can’t tell you how rewarding this is. When these kittens open their eyes — tomorrow or the next day, I hope — what will they see first? Momma? Me? Barry? Or the underside of the quarterberth? They’re sure to think that living on a boat is a natural thing, so we’d better get them settled in a house soon, or they’ll be ruined forever. Just like me.

4 thoughts on “The slippery path to sainthood”