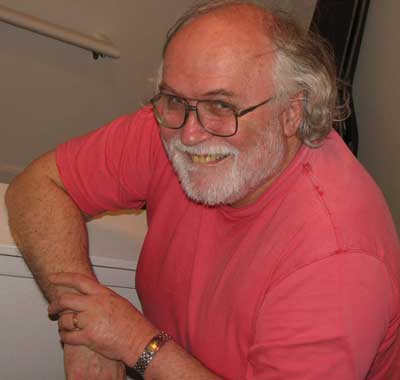 When Barry and I learned last week that Bill Brown had died unexpectedly of a heart attack, it knocked the stuffing out of us. We hugged each other and cried for a while. And then I imagined Bill’s voice in my head, saying “Enough sillyness.” We got back to work on the boat.

There were a lot of people who disliked Bill Brown, but he didn’t seem to mind. His abrasiveness was a test. If someone concluded the worst, that he was obnoxious, pigheaded, or rude, then he’d plant his tongue firmly in his cheek and do his best to earn that reputation by “yanking their chain.”

Me, I liked Bill Brown a lot. Probably enough to make up for all the people in the world who didn’t like Bill Brown.

Bill was outspoken, honest, and one of the most supportive friends I’ve had in my entire life. We shared our sailboat cruising dreams with him, and he never spoke a disparaging word about how we pursued them. Bill never once teased us about the length of the FLUTTERBY refit. He was not only tolerant of our breaks from the boatyard, he reveled in our land-based travels and told me my writing was as good as William Least Heat-Moon.

Bill made me laugh when he wrote, “Tolerance is learned. Living aboard certainly teaches tolerance. Living aboard in a boatyard has gotta be the postgrad course in tolerance.” It was his way of saying that he understood what we were going through. Tongue-in-cheek, of course.

Right now, I know I should write something funny for Bill. He loved my writing and once said, “You guys have one of the widest ranges of humor of people I know.” I’m not finding the humor in his untimely kicking of the bucket, but because he was so irreverent, he would denounce anything serious as, well, sillyness.

I went through Bill’s most recent emails and decided to have the last laugh. I’m just going to publish Bill — in his own words. Now I’m off the hook, and I can go burble and cry all I want. He’s sure to make you chuckle…whether or not you’re an engineer.

(After reading what Bill wrote to us all these years, I might add: And funny as hell.)

1 thought on “The sillyness of Bill Brown”