Lottery prizes come in many sizes. There are little wins, just enough to buy another scratch ticket. A medium-sized win of a couple hundred bucks feels pretty good and might pay for a weekend getaway. Then there are the big ones, the Mega-Super-Millions kind, that turn your life upside down forever, but in a good way.

If you’ve ever had a friend bring you chicken soup when you were sick, you’ve won the Scratch-Ticket Friendship Lottery. About a week before Thanksgiving, Barry and I hit the Mega-Super-Millions Friendship jackpot. 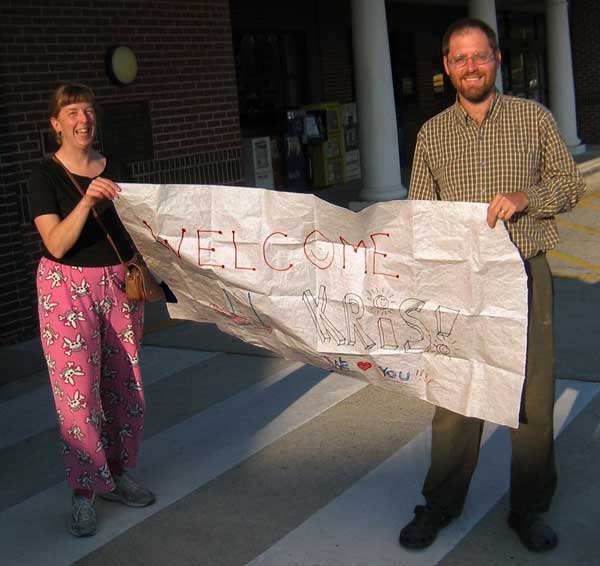 At the New Bern Airport with the sign reading "Welcome, Kris! We love you!"

The grand prize in the Mega-Super-Millions Friendship Lottery is this: One of your favorite friends gets on a plane in Capetown, South Africa, and flies halfway around the world. He shows up at your boat, which is propped on jackstands and surrounded by a mess of tools and toxic chemicals, and asks, while unloading a suitcase full of gifts, “Have you left me something in the job-jar?”

Barry and I had known for months that Kris was coming to the US for a vacation, but his plans weren’t fixed. He had about a month to visit his boating friends on the east coast before rendezvousing with his family for a skiing vacation.

Kris is currently between boats, but says that his wife gives him “time off for good behavior” to mess about on friends’ boats. Since everybody who meets Kris likes Kris, he has lots of friends with lots of different boats. On this trip, he started up in Connecticut in early November and boat-hopped his way down to Annapolis. Then he caught a plane to the tiny New Bern airport, where we picked him up. We were standing outside the door of the airport (I told you it was tiny — it only HAS one door) with a giant sign that said, “Welcome, Kris! We love you!”

That first evening, the three of us visited friends in two different New Bern marinas, then trooped over to Cap’n Ratty’s, a New Bern icon, for a celebratory dinner. Much later, we drove back to the boatyard, about an hour’s drive, and gave Kris a tour of Flutterby. He made a nest for himself on the port settee, which affords the most privacy but is a bit narrow for comfortable sleeping. At the time, the headliners weren’t installed, so his bed companion was a roll of insulation, at least three feet tall and four feet in diameter.

At this point, some of you are probably wondering how three people can live on a 33-foot boat that that doesn’t have separate cabins and is crammed with boat parts, Barry’s tools, and Margaret’s accordion. The trick is something we call “implied privacy.” Your crewmate is changing clothes? Turn your back! He or she just farted in the head? Turn off your ears!

Those of us who have crewed on many boats have figured this out. Kris is an expert in all kinds of unusual living situations, both on land and at sea. He’s been crew and captain of plenty of boats, and has done several trans-Atlantic crossings. 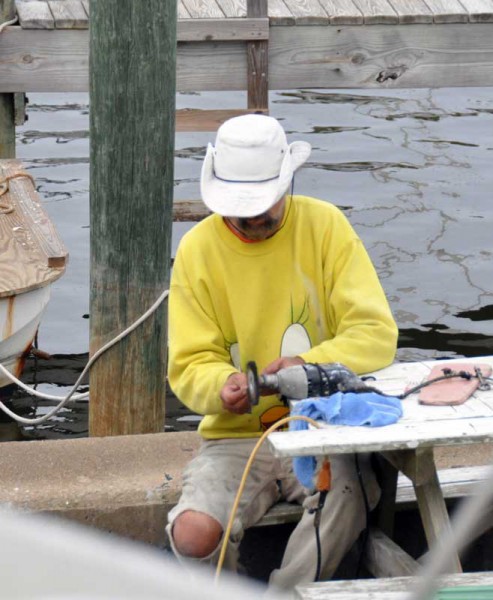 Kris wearing his magic pants with the air-conditioned crotch and the infamous Tweetie sweatshirt.

So, on our first morning together, we figured out each others’ routines, made a few minor adjustments, and everything went smoothly. The three of us sat down in the cockpit for a crew meeting, to see what exactly was in that job-jar. Then Kris selected a Flutterby uniform, so he would fit in with the crew.

Flutterby’s boatyard uniforms were, for the most part, completely unflattering, hideous, and mismatched. Each component was marred by paint, expoxy, or unfortunate holes. The trousers selected by Kris sported all three, along with a button fly that frustrated him so much, he simply left it half-buttoned. I would have thought doing up all the buttons would help keep him warm, since he was already complaining about the unique patented air-conditioned crotch.

Something about those pants must have been magic, though. With Kris helping, we started getting 200% more work done.

Perhaps the magic was really in the trailer. Kris had been working with us for a day or so when he needed a tool that Barry didn’t have. “Take him over to the trailer,” Barry instructed me.

You might recall my earlier comment that Barry and I had become “Keepers of the Keys.” The most important keys that we watched over were the keys to Charlie’s trailer, which he’d brought down from Ohio to work on his boat. He had left it stored in the boatyard when family duties called him back to Ohio, almost a year ago. This was the same trailer in which Buttercup had given birth to kittens the prior year.

I didn’t give Kris much background on the trailer, just walked him over there and unlocked the door. He took in the table saw, the drill-press, the circular saw, and the vise. I pointed out some of the other tools — routers, sanders, drill bits, and hand tools. Then I left him to do the job.

He came back, a half hour later, his eyes wide and his voice hushed. “Ooooh — it’s like Aladdin’s Cave!” What Kris had discovered was actually Aladdin’s Man-Cave. Any tool that Barry lacked (not that there were many), Charlie had in that trailer. Between Kris’ efficiency and Charlie’s tools, each job was executed quickly and checked off the list (or pitched out of the job-jar). 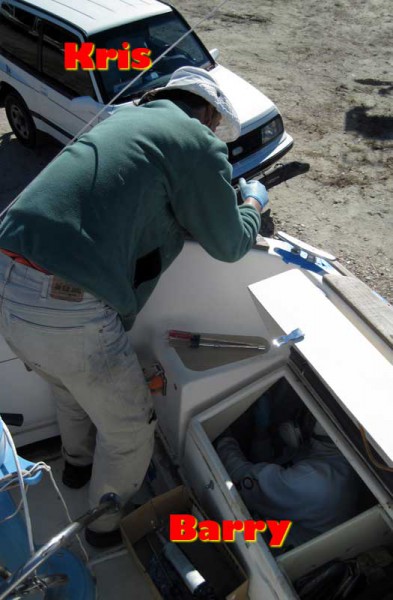 Working together, Kris and Barry rebed stern cleats (Barry is folded like a contortionist inside the lazarette) 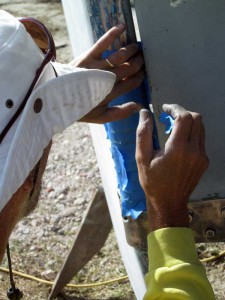 Kris repairs a crack in our rudder 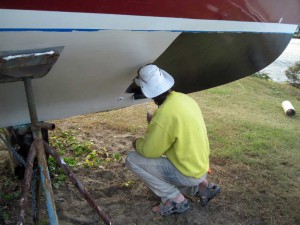 In just over a week, we were ready to launch Flutterby.

The three of us had: Replaced one hatch, reinforced and rebedded stern cleats and pushpit, reinstalled the binnacle and steering system, installed engine controls, sanded the bottom, painted it with epoxy barrier coat and bottom paint, discovered and repaired a problem with the rudder, and cleaned the fuel tank.

Regarding that last job, I should not say “we.” Some of you might recall that I am an experienced fuel-tank cleaner, having practically crawled into the diesel tank on Kris’ boat to clean it before we went to the Bahamas in 2007. I do not shy from what might be considered the nastiest, most uncomfortable, smelliest, job in the jar. But Kris seemed to think that one good turn deserves another, so this time, he cleaned MY fuel tank. Bless his heart. That’s like another million in the Mega-Super-Millions Friend Lottery.

Along with all this work, we’d also enjoyed a bit of local color and celebrated Thanksgiving. On the holiday, we worked all day and went to the Backstreet Pub at dusk for their annual potluck. Although I was sore in new and unexpected places from crawling around under the boat with a paint roller, I was soaring. I wanted to shout, “WOO HOO! EVERYBODY! I PUT BOTTOM PAINT ON MY BOAT TODAY!!!!!” But I stayed quiet, knowing that nobody at the pub would understand my elation. “Yeah, sure, pass the cranberry sauce, will ya?” 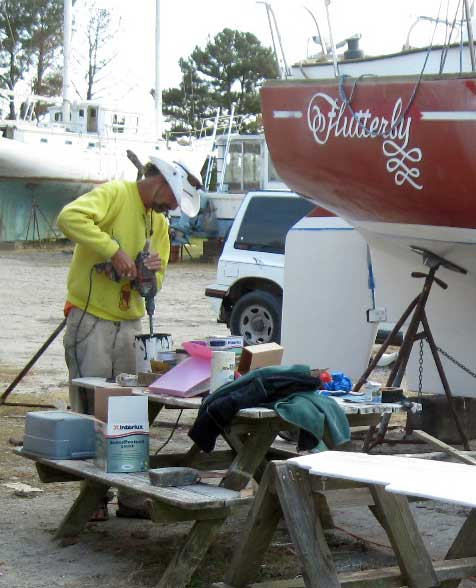 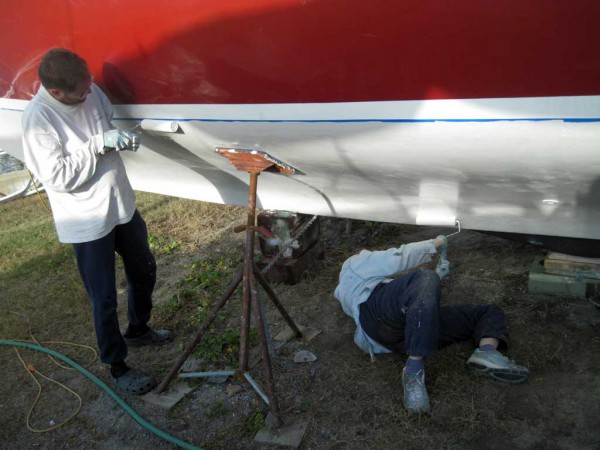 Barry and I painted the hard-to-reach parts. I only got a little epoxy paint in my hair.

Despite all this talk of a job-jar, the real Flutterby list was on the computer, in Excel. Every to-do item that Barry and I could think of was in that file. A big red line separated the must-do-before-splash items from the rest of them.

The wonderful thing about Kris wasn’t just the third set of hands, it was the third, more experienced, brain. We’d been immersed in our giant set of projects so long, we sometimes lost sight of the goal. It was great to have him point out the jobs that didn’t need to be done right now. Those jobs were “below the line,” and some of them got deleted forever.

Finally, on November 30, there was nothing left “above the line.”

It was time to splash. 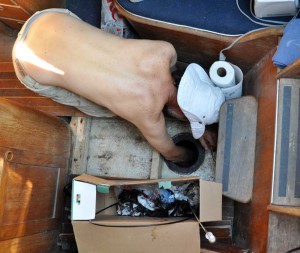 One good turn deserves another - Kris cleans my fuel tank, 2010 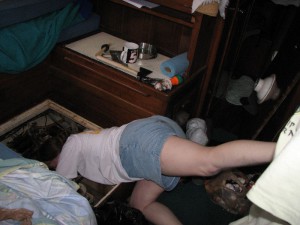 One good turn deserves another - I clean Kris' fuel tank, 2007

4 thoughts on “The man in the magic pants”