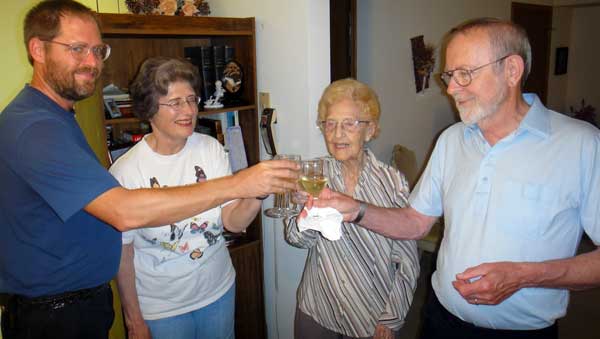 Barry and his family share my favorite toast. Here's to Loraine!

When I was growing up, I thought it terribly unfair that I didn’t have a grandmother. I envisioned white-haired grandmothers as the source of all kinds of good things, like cookies, presents, and sympathy. When a friend’s grandmother tried to poison me during a sleepover in the 7th grade, I figured that was an anomaly.

One of the first things I learned about Barry was that he had a cookie-baking grandmother. She used to send the most amazing, gigantic boxes at Christmas — a panoply of homemade sweets that included fudge, cherry bites, and icebox cookies, each one individually wrapped, with love, in plastic wrap. But what I enjoyed even more than Grandma’s cookies was her sparkle.

The first time I met her was at Barry’s mother’s 50th birthday dinner at a Columbus restaurant. I was working the night shift, so I took a longer-than-usual dinner break to attend. After a meal of rich pasta, bread, salad, and cake, Grandma turned to me and said, “How about coming back to the hotel with us for a little spumoni?” I was stunned. How could this crazy family put ice cream on top of all the other food? I was stuffed! But Grandma persisted. “Just a little spumoni?” I didn’t want to offend her, so after she asked several times, I finally agreed.

When we got to the hotel, she and Barry’s grandfather pulled out a cooler and, to my surprise, champagne glasses. She meant Spumante! For a toast! When I admitted my confusion, we all just laughed and laughed.

In the decades since then, every time we get together with Grandma, there’s a lot of laughter. Growing up in the Roaring 20’s, she has a unique perspective. She lived through the deprivations of Prohibition, the Great Depression, and the second World War. She would tell us stories about about her huge, crazy family, and we’d stay up into the wee hours, talking about everything and anything. She was the ultimate hostess, not just plying us with food and drink (“I can’t eat another bite, Grandma!”), but making sure everyone was having a good time.

When she visited Seattle in the late 90’s, she made a lasting impression on our sailing friends. Bill Brown would complain at great length about “those damned blue-hairs;” why couldn’t more seniors be like Barry’s Grandma? He started a tradition at every gathering, raising his glass and saying, “Here’s to Loraine!” Puzzled friends would say, “Who’s Loraine?” This would give Bill a chance to tell them just how cool Barry’s Grandma is. Then we’d have another toast, and everyone would join in, no matter what they were drinking: “Here’s to Loraine!” 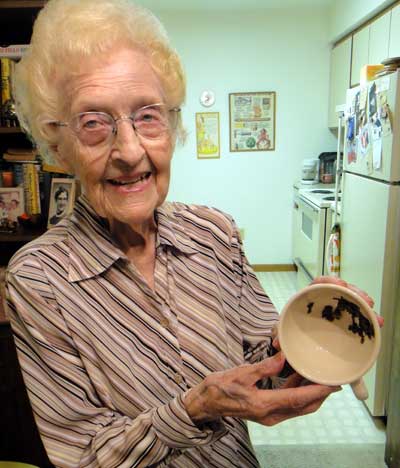 Grandma is pretty down-to-earth, so her passion for reading tea leaves comes as a bit of a surprise. She’ll make a pot of loose tea and pour us each a cup with the leaves floating in it. When we’ve sipped all but about a teaspoon, we swirl the cup carefully to drain the remaining liquid and turn it upside-down, resting on a spoon in the saucer. She can do this perfectly every time, with just the right flick of the wrist. The rest of us are complete klutzes, pouring all our leaves into the saucer, or dumping tea on the tablecloth. But when it’s done right, you can pick up the teacup and find clumps of tea leaves in the bottom, forming recognizable patterns. Or not-so-recognizable.

We take turns peering into each other’s cups, studying the dregs of our tea. “Is that a bird?” “Maybe that’s some kind of fish.” Near the end of the session, when our imaginations are getting tired, the amateurs will say, “I can’t make any sense of this one at all,” but Grandma still sees a tree or a flower and can interpret their meanings.

Of course, if the tea leaves seem to be forming a computer, a cellphone, or a satellite, we all scratch our heads and wonder what’s in the future. That’s because the guidebook she uses was published in 1922.

A few years ago, when she read her own fortune, Grandma kept finding crosses, which mean someone you know is going to die. She stopped reading the leaves for a while, afraid of what the cup might tell her. It’s tough to outlive your husband, your siblings, and most of your friends.

These days, Grandma’s a little less prone to late nights. She gave up baking cookies over a decade ago. But she’s still reading tea leaves and living on her own at almost 100. She still has that sparkle.

A couple of weeks ago, we had a 50th anniversary celebration for Barry’s parents, and because Grandma doesn’t travel, we held it in the Michigan city where she lives. 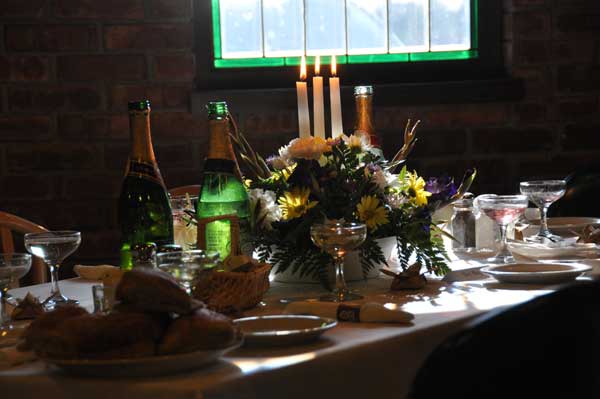 The beautiful head table at the golden anniversary party

Barry’s sister had done a fantastic job of decorating the restaurant’s tables, and at the last minute, Barry and I added a bottle of champagne and sparkling cider to each one. When the restaurant set stemware at each place setting, the tables gleamed with reflected light. But what was this? The “head” table, where the original guests from the 1961 wedding were seated, seemed to have something extra.

You guessed it — that’s where Grandma was sitting! She hadn’t been to a party in many years. Now she seemed to have found some reserve energy, and she was the life of the party. How many parents get to attend their children’s 50th wedding anniversary? It was pushing her limits, and she’d be tired the next day. But there she was, sparkling away.

And that is what Grandma does best. The champagne is optional.

2 thoughts on “The life of the party”