Now that we’re out cruising, I have a little time to review old writing notes and find stories to share with you. Here’s one from October in the boatyard, with a special treat — a video!

I couldn’t believe what I was seeing. I was walking across the boatyard one morning when I saw a pirate.

I rubbed my eyes, but the image persisted. He was standing on the catamaran named Fellowship, which for years had sat forlornly out in the boneyard. Now Fellowship was parked smack dab in the middle of the yard, in the spot normally reserved for the crane.

At this distance, he was the spitting image of Johnny Depp in Pirates of the Caribbean — shoulder-length black curly hair, black goatee, red bandana, black leather boots, black eye makeup, torn jeans, and something that I would call a “blouse.”

I went into the office, where Carolyn was staring out the window with a look that could only be called “flabbergasted.” I probably had the same look.

She shook her head. “He says he’s going to buy that boat.”

Now the pirate was hoisting a large black flag with a skull and crossbones that said “Choose Your Poison.” He had a huge grin on his face.

“I don’t know — I told him he needed to talk to Kenny. The guy said he’d be over on that boat, and he said, ‘Tell him to look for the pirate!'” Carolyn rolled her eyes, and I couldn’t help but giggle.

Carolyn added, “He FLOUNCED. I don’t think I’ve ever seen a man flounce like that.”

Over the next few days, all the boatyard gossip was about the mysterious, dramatic pirate: “Instead of hello, he says ‘Ahoy!'” — “I saw him take down his pirate flag at night, like an ensign.” — “He calls all the boats ‘ships.'” — “He told me he’s more of a Disney pirate.”

The first time the pirate spoke to me, I was sitting in the lounge with my laptop. The door opened, and he walked in carrying a strangely familiar kerosene lantern. This was completely anachronistic, since he went straight to the new high-tech Coke machine, with its illuminated display and fancy purple lights. “Ahoy!” he said by way of greeting. Like several of the older denizens of the yard, I ignored him. We were all afraid of losing our composure and laughing uncontrollably if we spoke to him.

The pirate turned out to be a fairly industrious man by the name of Logan. (“Sheesh, that’s no name for a pirate,” I grumbled.) Even though it was his first boat, he was able to get her launched in about a month. Folks in the boatyard provided him with lots of well-meaning advice. He listened politely, like a traditional Disney pirate, and then did things his own way, like a traditional scurvy knave.

Eventually, Logan-the-pirate started hanging out at Happy Hour. He had a grandiose scheme for Fellowship. He was going to paint her black — black hull AND black deck  — and have black sails made. He planned to mount cannons. Then he was going to offer pirate charters aboard his “ship.” Her new name: The Black Lotus.

When I heard the plan, all I could say was, “Brilliant!” Even if you are not a fan of things piratical (yes, we are talking about scoundrels who murdered, raped, and pillaged), it’s a clever business idea. Charter boats are a dime a dozen. But pirate-themed charter boats, with black sails and foot-scorching black decks? And Jack Sparrow impersonators and cannons? There will be only one of those. I know a couple of people who’d sign up in a heartbeat.

Once I gave up being a curmudgeon and started talking to Logan, I decided that I liked him a lot. He was full of infectious enthusiasm. After many years of sailing and a few years in the boatyard, I was losing sight of the goal — this stuff is supposed to be fun! So why not dress in crazy clothes and call “Ahoy!” to strangers? Why not carry a lantern instead of a flashlight? Why be “normal?”

The first time I actually had a conversation with Logan, a few of us were sitting around in the dark, talking and sharing libations. It was too dim to make out details; each person was just a shadowy figure and a voice. I mentioned something in passing about Burning Man, and Logan suddenly sat up.

Aha — another Burner in the boatyard!

This explains a few things. We Burners wear costumes even when it’s not Halloween. Hence me, in my pink-and-white bunny ears, carrying a hula hoop around the boatyard. And hence Logan, the Disney pirate carrying a kerosene lantern. (Which he says he ordered after seeing the ones used by Lamplighters at Burning Man!)

When Fellowship, soon to be the Black Lotus, left the dock, Barry and I were on hand with cameras. Logan-the-pirate was at the helm, grinning from ear to ear. A few moments later, as they approached the bridge, he turned the wheel over to his friend and made his way forward to the mast. Wearing his black leather pirate coat, he climbed the mast steps, some twenty feet to the spreaders. As promised, he danced an ecstatic little jig on the spreader, looking just like Jack Sparrow in the introductory scene of Pirates of the Caribbean — with one exception. Logan’s boat — er, ship — was not sinking. 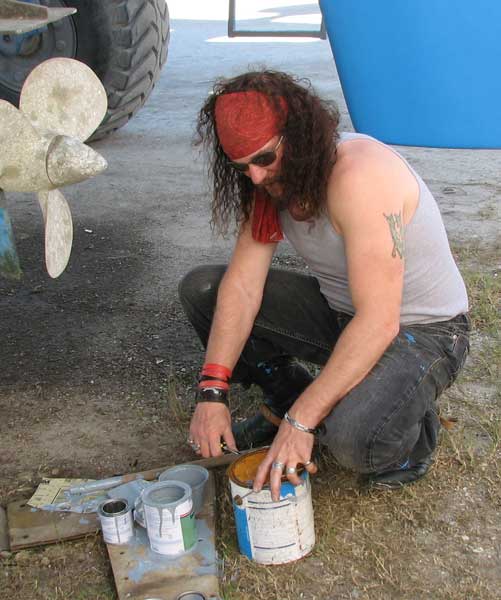 Even pirates have to apply bottom paint to their ships 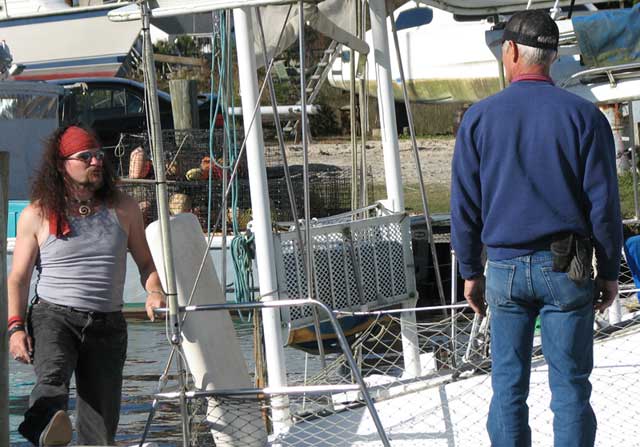 Who has more influence than a pirate? The boatyard owner who decides when to launch your boat. Here's Logan talking to Kenny Bock at the launching of the pirate ship. 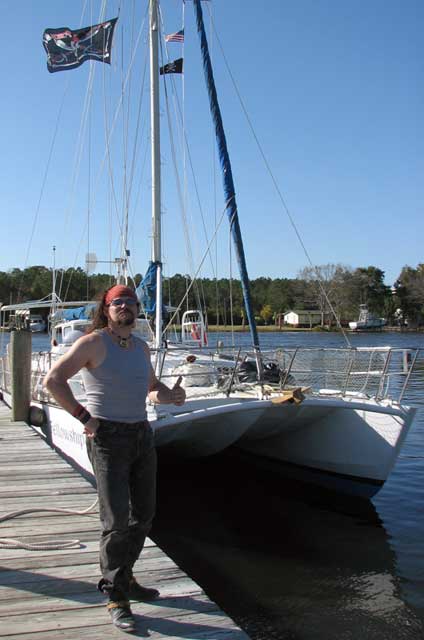 Logan shows off his pirate ship on launching day

5 thoughts on “The Fellowship of Pirates”