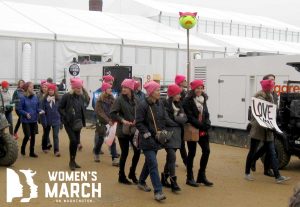 Marching on the Mall

I lived in Seattle in 1999, when activists and protesters turned the meeting of the World Trade Organization into “the Battle in Seattle.” I’d seen firsthand the broken windows and burnt-out bus shelters. I lay in bed listening to concussion grenades going off a short distance from my home. Estimates say that about 40,000 protesters were responsible for that chaos.

In the days before the Women’s March on Washington, I wondered if I was going into a situation like the Battle in Seattle. Even though the organizers were telling us to keep it positive, emails were circulating that warned us how to deal with things like being arrested or pepper-sprayed. While I traveled on a overnight bus to the capitol, the media reported that several hundred protesters at the inauguration were arrested for vandalism, setting fires, and damaging vehicles.

When we arrived at first daylight, we found no evidence of that violent anger. Our group was bubbly and excited, pressing our noses to the bus windows as we passed the Pentagon and the Lincoln Monument and crossed the Potomac River. Once we left the bus and joined the throngs, there were pink hats, clever and creative signs, and a hugely diverse group of people.

Everywhere, I saw strangers being kind to each other.

Some offered me free stickers and signs. In the potty lines, people shared their tissues and hand sanitizer. A woman on the street handed me a bottle of water, right when I needed it the most — I had gotten a headache from dehydration. I passed out Happy Spots and York Peppermint Patties. 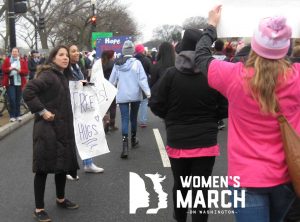 There were over a half million people at the Women’s March on Washington, including thousands of children. They rode on their parents’ shoulders, carried their own signs, and even led chants with megaphones to amplify their high-pitched voices.

I overhead one father tell his son that on this day, he was allowed to say any bad word he wanted, as long as it was about the president. The little boy whispered something in his father’s ear, and the man’s eyebrows shot up. Then he nodded, and said “Yes, you can even say that.”

There was not a single arrest at the Women’s March, even though there were three times as many people there as at the inauguration. What a wonderful example we have set for our children and young people, showing them that peaceful resistance is possible. 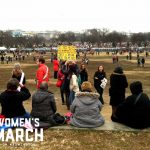 “Just a Mom here for my kids.” 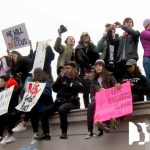 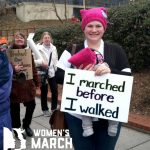 “I marched before I walked.” 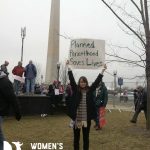 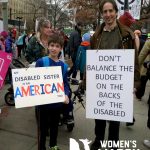 “My disabled sister is AMERICAN” 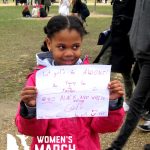 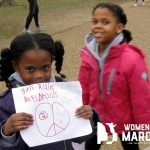 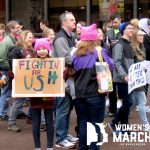 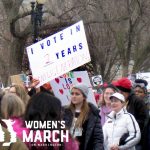 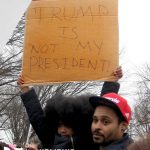 “Trump is not my president” 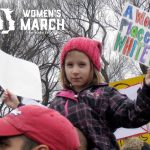 “A woman’s place is in the White House” 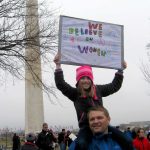 “We believe in women” 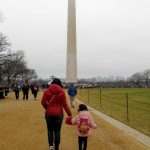 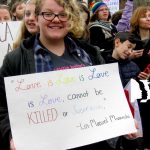 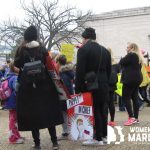 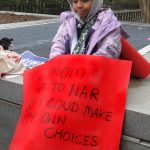 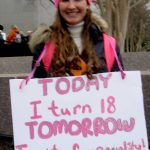 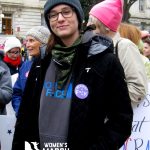