“Because it is Monday, you see,
We are giving away this TV,”
When the game reached its half,
We could not help but laugh,
When the waitperson brought it to me.

For I’ve not owned a set til this day,
And the prize brings me dread and dismay,
Though the gesture was nice,
It’s an evil device,
Do I keep it, or give it away? 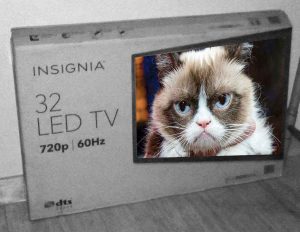 Meps’ reaction to winning a TV

On a Monday evening, I met my sister, Julie, at Highlands pub in Eugene, Oregon for a drink and some conversation. As we sat down in the booth, she noticed that there was a TV over her head. “Do you want to switch places?” she asked, knowing that I can’t stand television. “No, it’s high enough that it won’t interfere,” I answered.

Our waiter was a friendly fellow, and at one point, he brought us a couple of cards and pencils. “What’s this?” we asked. “We’re giving away a TV at halftime,” he said. Until then, we hadn’t even noticed that the rest of the patrons were watching Monday Night Football.

I thought it was safe to put my name in the drawing, because I never win anything. Until this time: At halftime, they announced that Meps Schulte was the winner, and the waiter carried a brand-new 32-inch television to our table. Julie and I were practically on the floor, laughing at the irony. I am 100% certain that I was the only person in the place who did not already own a TV.

Sadly, my perfect record of never owning a TV set is now broken. Should I give it away? To do so would increase TV-watching in the world. Or should I keep it to watch Burning Man documentaries, classic movies, and silly cat videos?

What a dilemma! I welcome your suggestions in the comments.