This past Sunday, my friend, Jeanie, and I were sitting at a picnic table, enjoying beautiful weather and laughing a lot. We were in Young’s Park, a riverfront park in Vero Beach, Florida.

She had the view of the water: “Ooh! Look! A dolphin!” I turned around to see.

I had the view of the parking lot: “Ooh! Look! A giant teddy bear!” She turned around to see.

A woman strode across the grass, carrying a 3-foot tall teddy bear. He wore glasses and a hat, a t-shirt with a slogan, and a Hawaiian shirt. Like most bears, he wasn’t wearing pants.

She set him down next to a tree and went back to her car. She and a second woman put a sign that said “LOVE LIFE” next to the bear. They started taking photographs of each other with the bear.

“That reminds me of the Happy Spot sign,” I told Jeanie. “What do you suppose it’s about?”

“I’m waiting for you to go over there and find out,” said Jeanie.

“Me? Why me?” She smirked, and that started me laughing again.

They’d moved the bear closer to the river, and now other people were stopping to ask curious questions.

I took my time, finishing my sandwich, and when I got up, Jeannie muttered, “Finally.” We walked over, and I asked, “Does the bear have a name?”

Two years ago, Steve left this very spot in Young’s Park in Vero Beach, Florida, walking a zig-zag route around the US with a sign on his head reading “LOVE LIFE.”

It was not the first time Steve walked across the country, raising awareness about suicide. It was the seventh.

Steve lost his son, Stevie, to suicide, and his daughter Shelly, a few years later. His website says that he is inspired to share the love he would otherwise be sharing with his children with the people he meets. To do this, he has walked 34,000 miles, giving love and encouragement to the people he meets along the way.

To say that Steve Fugate is an expert in talking to strangers would be an understatement. Steve Fugate has literally saved the lives of countless strangers. 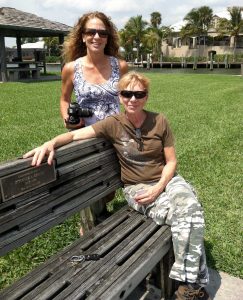 But this post isn’t really about Steve. It’s about Sonya and Carol, his extraordinary friends.

Ardent supporters of Steve’s mission, the two of them do all kinds of behind-the-scenes work. Fundraising, social media, encouragement, sending care packages — they are two of many people who make LOVE LIFE possible. The previous day, they helped put on the second annual Love Life Walk Celebration. Dozens of people gathered, wearing LOVE LIFE t-shirts and carrying signs. Pointing to the 65-foot Barber Bridge over the Intracoastal Waterway, Carol said, “We walked over the bridge together.”

When we met them, they were celebrating Steve’s second anniversary on the road with pictures of the LOVE LIFE bear, in his Hawaiian shirt, at Steve’s starting point. It’s a reminder of the point where he will eventually return, and the fact that his LOVE LIFE family is there. 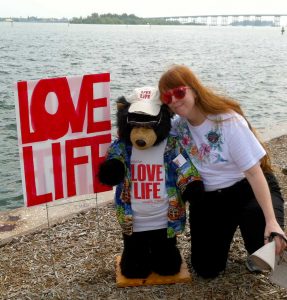 Meps with the LOVE LIFE bear

By strange coincidence, that spot is significant to me. In 2011, after my brother, also named Stevie, died in a tragic incident, my husband and I stayed in Vero Beach as long as we could. Finally, we set sail northbound on Flutterby. The morning we left, my Dad stood at the precise spot in Young’s Park where the LOVE LIFE bear did. He waved until we were out of sight, unable to see the tears streaming down my face. My Dad always loves life and inspires me to do the same.

Steve Fugate’s valuable LOVE LIFE message is heard much farther afield than his two feet will carry him. Sonya and Carol — and you and I — are making sure of that.
~~~
You can read more about LOVE LIFE on Facebook and on the web. There’s a short documentary film on Vimeo.