I am glad to have worldwide acclaim,
In the self-published, dog-eat-dog game,
It’s my title, thank god,
That is prize-winning odd,
Not my writing, my looks, or my name. 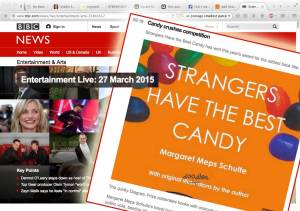 I don’t know whether to be excited or embarrassed.

When The Bookseller announced that Strangers Have the Best Candy has received the Diagram Award for the Oddest Book Title of the Year, they said there was no cash award, just a “passable bottle of claret” awaiting me in London.  However, their news release said that agents and publishers “are tipping it to be the ‘hot book’ at the forthcoming London Book Fair.” Is this an example of British humour (sic), or are they serious?