Do you know that today is a holiday? It’s Chickie-Bunny Day!

I invented it several decades ago, when I saw how drastically stores marked down  candy in the days after Easter had passed. I would buy chocolate and jelly beans (my favorite!) at 50%, 75%, and even 90% off, and by the end of the week, I would have enough for a giant basket.

Saving it for Chickie-Bunny Day, when I could share it, kept me from simply gobbling up the sugar every time I found a good deal.

Now that I eat less sugar, I still celebrate, but differently. Chickie-Bunny Day is my excuse to revel in the sheer silliness of commercial Easter. What do plastic eggs and stuffed bunnies have to do with death and resurrection? There were no jelly beans at the Last Supper, and Jesus’s shroud was not pink and fluffy.

It makes sense to move those traditions to Chickie-Bunny Day, and let Easter be Easter. The traditionalists can keep the ham.

I told the world about Chickie-Bunny Day ten years ago, on the Adventures of Meps’n’Barry. I’m still not sure what to say about semi-nude jelly wrestling.

You can’t argue with this: Thanksgiving is not really about food. If it was, we’d be perfectly happy to eat turkey in a restaurant. There’s an entire episode of Mr. Ed about how horrible that would be.

In 2008, Barry and I planned to spend Thanksgiving with my brother, Stevie. He didn’t call, and he didn’t arrive, and by noon, I realized our plan had fallen apart. Barry and I were in a boatyard, hauled out, with no invitations to a big family meal. There wasn’t even anything appropriate to eat on the boat. I shed a few tears of frustration and loneliness over my sorry plight.

I’d heard a rumor that the God-fearing Baptists in town would be serving dinner for nomads and wandering sailors. I’m no Baptist: You could call me a Baptist-fearing Goddess! But I was willing to face my fears for some turkey and cranberries.

We drove the Squid Wagon into Beaufort at 1:30. “We’re not serving until 3 pm,” said the nice man in front of the Baptist church. “You should go over to the Methodists.”

We headed over there, about a block away. When we walked into the Methodist church, we found that we’d missed their dinner, but they were eager to load us up with leftovers. We staggered out to the Squid Wagon with to-go boxes of turkey, stuffing, mashed potatoes, and about a dozen desserts.

Then we climbed back into the front seat of the van and had a debate: Where should we eat our dinner? “I don’t want to eat Thanksgiving dinner on a park bench in town,” said Barry.

We decided to take a one-hour walk and then go back to the Baptist church, where they welcomed us with open arms. Their food was simpler than the Methodists, but we found the camaraderie we were looking for. We were treated as honored guests, not strangers.

Over dinner, we discovered that many of our new Baptist friends were in a hurry to eat and get going; they were going home to share a second Thanksgiving dinner with their families! That explained why the Methodists served so early, why there were so many leftovers.

At the end of our meal, we were urged to take even more leftovers! We were chuckling as we drove back to the boatyard with plenty to share with my brother, who arrived a day later. I pray the God of the Methodists and Baptists forgives us for double-dipping. We gave thanks for every bite, but it was not about the food. 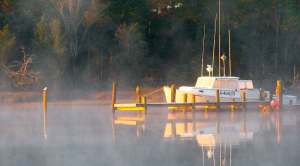