A couple of years ago, when Barry and I joined Facebook, we found out what happened to some of the folks we’d gone to high school with. We were especially interested in the ones who’d left Columbus, Ohio, that place known as “Cowtown” that inspires long-distance travel.

Now I have to admit that one of the most interesting is still living in Central Ohio. Back when she went to high school with Barry, in a class of about 100 kids, she was known as “Kathy.” Now she’s “Kate.” For a couple of years, I’ve listened with growing irritation to Barry’s constant chatter about her, always prefaced with, “On Facebook, Kathy said…” She has the kind of big, successful life that makes me green with envy: A writer and video producer, single parent to two adorable adopted kids, funny, charming, good-looking.

OK, I can look past all that. Kate Koch Gatch is a real, live hero.

For the past five years, she’s collected brand-new bikes, helmets, and locks to donate to foster children in Central Ohio. This year’s goal of 750 bikes brings the total to almost 2000 bicycles.

Kate is known as “the Bike Lady.”

It’s a passion, not a job. She volunteers her time and covers all the administrative costs, so that every dollar donated goes towards putting kids on bikes. Kate points out that the public funds that cover the foster care system cannot be used for holiday gifts, so these are kids who wouldn’t have bikes otherwise.

Kate, herself, is not into cycling. She just recognizes what a bicycle represents to a kid — a big-ticket item that demonstrates love, respect, freedom, and hours of fun. 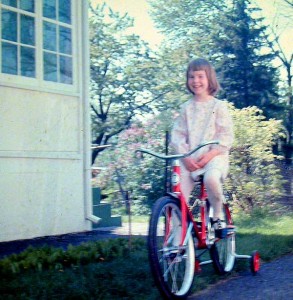 It certainly brings back memories for me — what was my first bike? It was red, a hand-me-down. When it was time to take the training wheels off, my Dad was at work, and I had the impatience of a small child. So Mom grabbed a wrench and wrestled them off. Then there was my first new bike, a blue-green one-speed with coaster brakes, high handlebars, and a banana seat. You could carry one friend on the handlebars and another one on the back of the long seat, if you could balance your bike with three people on it!

This morning, I woke up thinking about all the people in my life who I want to share Kate’s story with:

Thinking about all of them, there was only one thing for me to do this morning, to kick off the holiday season: Go to the Bike Lady’s website and “put a kid on a bike.” It’s just one of the 750 that Kate will give away. Reading about this project makes me feel really, really good about the world. So if you are feeling down or blue, looking for some inspiration, or wondering if you can do anything to make the world a better place, check out the page on her site called “Start Your Own.”

It feels great to know a person who is doing something to bring happiness to so many kids in difficult situations. As Kate says, “So many kids will be over the moon and riding down a hill in 3 weeks thanks to people like you who get it, understand it and take action.” That’s what we all have to do, with the emphasis on taking action.

A little inspiration and a lot of action can go a long way. To use her own words, Way. To. Roll. Kate.