This piece was originally titled, “Bribing the Fourth Estate.” After I posted it, I discovered, to my distress, that few people know the fourth estate refers to the press.

Here’s a tidbit that most people don’t know: A newspaper’s masthead is not their name on the front page. That’s the nameplate. The masthead is inside, often on page 3, and identifies the publisher, editors, and contact information for a newspaper.

Last week, I carefully tore the address of the Stranger from their masthead. I put it in my book bag and tossed the rest into the recycle bin. My father-in-law doesn’t normally read the recycling, but he needed some newsprint to protect a surface on which he was painting.

He wasn’t completely scandalized. Just curious, and surprised at what I was reading in my husband’s absence.

The advertising in the Stranger is scandalous: Recreational cannabis delivery, escort services, and an underwear ad where the woman’s hands are inside her panties. (She was right above an ad with the heading, “Sex Offender Registration Got You Down?”)

Yet, like Playboy, the Stranger has a reputation for excellent journalism. In addition to winning a Pulitzer, it’s where Dan Savage got his start, as the editor-in-chief and as the writer of a blunt and often-shocking sex advice column, “Savage Love.”

What I love about the Stranger is that they take the news seriously, but they do not take themselves too seriously.

On Friday afternoon, I braved Seattle traffic, and drove to the address on the masthead. If you’re from Seattle, you probably know the block, the one we call the-Value-Village-where-REI-used-to-be (they moved in 1996). It’s super-hip, brick and trendy, around the corner from the Century Ballroom.

There was no sign, only a newspaper box full of Strangers beside a tall, unmarked door. The door was incongruous, a piece of modern metal art on an old brick warehouse. A couple of men occupied the sidewalk, blatantly ignoring the law against sidewalk-sitting that’s intended to keep homelessness at bay. The entryway with the newspaper box reeked of urine. Inside, my spidey-senses were tingling, because there was no one in the foyer, just a dimly-lit dead-end corridor with an elevator.

My heart thumping, I peeked into the elevator and saw a scrap of paper that said “The Stranger” beside the third floor button. At least I was in the right place.

Alone and unmolested, I rode the elevator to the third floor, where I found the receptionist. He was a young man behind a bulletproof glass window, eating what looked like pie. I breathed a tiny sigh of relief. He had a sweet-tooth.

He held his hand over his mouth, embarrassed, and mumbled “Can I help you?” around an extra-large bite. I took a deep breath and remembered what I had rehearsed in my head.

“I’m on a mission,” I said, cozying up to the counter and the little opening in the bulletproof glass. “I need to know which of your staff members is most susceptible to bribery.”

His eyes widened as he swallowed his pie and asked, “What kind?”

At this point, I opened my leather briefcase and took out a baggie of candy. It happened to contain Hershey’s kisses, Reese’s peanut butter cups, and three Strangers Have the Best Candy cards. My hand was trembling with fear as I pushed it through the little slot.

“Candy,” I said, and watched him break into a grin at the cards. I reached into my bag a second time, and pulled out a copy of the book. “You see, I have this…” I pushed it through the little opening.

He looked at the title, made the connection, and started laughing. “I can give it to our book guy,” he said. “He’ll probably want this, too,” I said, pushing a third item through the little slot, a copy of my press release.

He carefully assembled it all into a package, putting the press release inside the pages of the book and the name of the book guy on a post-it note on the outside. I watched as he clipped the candy bag to the cover.

“Do you think it’s enough?” I asked. “Oh, yeah,” he said, patting the parcel. “Are you going to give it all to him?” I continued. He nodded earnestly. “Of course,” he said, as if I’d challenged his integrity.

That’s when I pulled out a second bag of candy, and pushed it through the opening in the glass. “Then this one’s for you!” I said. “Have a great day!”

I was still shaking like a leaf as I got into the elevator and fled back to my car. I’ve never tried bribing the Fourth Estate before. But I had to try. I simply had to give Candy to the Best Stranger.

Update on my bribery attempt, June 16, 2014:
At the Georgetown Carnival this past weekend, I gave a “Strangers Have the Best Candy” card to a young man in the crowd. He laughed so hard, I went on to say, “I even tried to bribe The Stranger with candy!” His eyes grew wide, and he looked at me seriously. “How did you know I worked there?”

“I didn’t,” I responded. Serendipity.

He wasn’t in the newsroom, though. “I don’t have any influence there. I’m in the tech department.” He went on to tell me, “Paul Constant is the book guy. He has stacks and stacks and stacks of books on his desk.” He held his hand at shoulder level to indicate how high the piles were.

My face fell. I was discouraged. Then I thought about what I’d done, and I cheered up. “GREAT! By paper-clipping a lumpy bag of candy to the cover, I have made it impossible for Paul to simply stack another book on it.”

In other words, I’ve bribed my way to the top, where I hope to stay until Paul Constant reviews Strangers Have the Best Candy!
~ 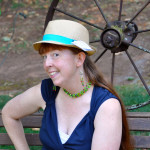 Margaret Meps Schulte is the author and illustrator of Strangers Have the Best Candy. 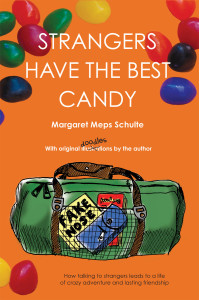 Strangers Have the Best Candy by Margaret Meps Schulte

OK, now that I’ve gotten that off my chest, I will try to calm down. This is like having a baby. I’m hyperventilating.

Ever since I started blogging in 2003, my followers have been asking, “When are you going to publish a book?” I stalled, because I didn’t know what the book should be about. I didn’t want to write a travelogue or a navel-gazing memoir.

Finally, I figured it out! Strangers Have the Best Candy, which is available on Amazon today, is about my chance encounters with strangers — all the laughing, crying, topless, boozing, and completely adorable people I have befriended in my travels. It’s their book. I just wrote it. 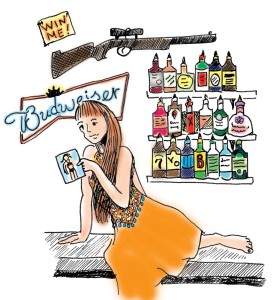 Since these encounters are completely spontaneous, there aren’t a lot of photographs. I had to sit down and illustrate it myself, with 125 pen-and-ink drawings that I completed in the St. Marys, Georgia public library. I didn’t even know I could do that until I tried.

The stories are amazing and hilarious, and the illustrations will make you grin. But it has its thoughtful moments, and there’s a pretty big message between the covers: Strangers have wonderful gifts for us, if we take the time to talk to them.

Maybe the Strangers Have the Best Candy message will go viral, and then you can say you knew about it and followed the blog before it was famous! Thank you for staying with me for all these years, and for encouraging me to say what’s important to my heart.

I would love it if you would reshare this post with your friends in email and Facebook, and go out to the Amazon page and give me a review. I will reward you with hugs the next time I see you, because I think hugs are the best candy of all. 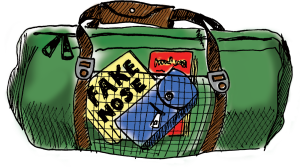 (you did see the link above, to my Amazon page, right? If not, here it is again!)