It seems that I am not the only one with something important to say about suffering. For another masterful look at the subject, read “What Suffering Does,” by David Brooks in the NYTimes (April 7, 2014). ~1meps

When I look back at 2013, I suffered a lot. I didn’t write much, because I was so busy suffering. And when I wasn’t suffering, I was running around, super-busy, trying to keep ahead of the suffering that nipped at my heels.

I do have a lot of beautiful photos from 2013. In them, I see exuberant, joyful smiles and gorgeous scenery. Those were taken during the running-around, super-busy times. The suffering is just outside the picture frame. 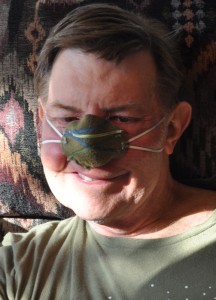 I spent the first half of the year in landlocked Ohio, far away from Barry and the boat. I was caring for my disabled brother, Hank, who had a rare type of cancer that led to multiple surgeries and the loss of half his nose.

While he was undergoing radiation in the summer, I noticed something funny on my nose, too. In a  freakish solidarity with my brother, I landed in surgery in September, losing a portion of my beautiful, freckled nose to an invasive basal cell.

Losing half a nose is nothing, though, compared to losing a person. In the middle of October, I lost my partner in creative and artistic endeavors, Philip. My phone became heartbreakingly silent, as the source of my daily encouragement and inspiration vanished.

To Hank, the cancer brought wonderful amounts of love and attention — visitors, phone calls, presents, flowers. Each trip to the hospital was a new adventure, a chance to make new friends. Every medical person who interacted with him came away with a gigantic smile and sense of wonder.

Just as he had when we went on vacation in 2009 (see Smiling so much, you need a new toothbrush), he kept me running. I was constantly busy, scheduling appointments, tracking medications, driving, cooking, being his nurse. But as long as I was with him, I wasn’t suffering. How could I, in the presence of that glorious smile and cheerful attitude? How could I suffer, if he didn’t? 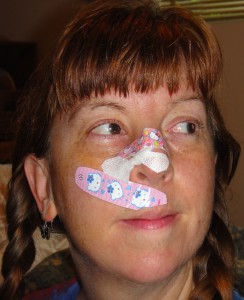 Barry tried to cheer me up with Hello Kitty bandaids

I forgot that lesson totally when I had my own surgery. I was miserable at the thought of being disfigured, in agony because I refused to take the pain medication prescribed. I cried and whined. I was the worst patient ever.

A month later, when Philip died, I immersed myself in suffering yet again, for months. I’ve cried so much, you’d think the boat would be floating.

Lately, however, I’ve been thinking about this business of suffering. Hank had a major trauma in his life, yet he suffered little. I have seen people suffer more over a broken vacuum cleaner or lost keys.

Based on Hank’s example, I believe suffering is optional. We can choose to separate the events that cause suffering from the suffering itself. I’m going to try that in the coming year.

Suffering takes a lot of time. When I set it aside, I’ll be writing a lot more, taking beautiful photos, making art and music. 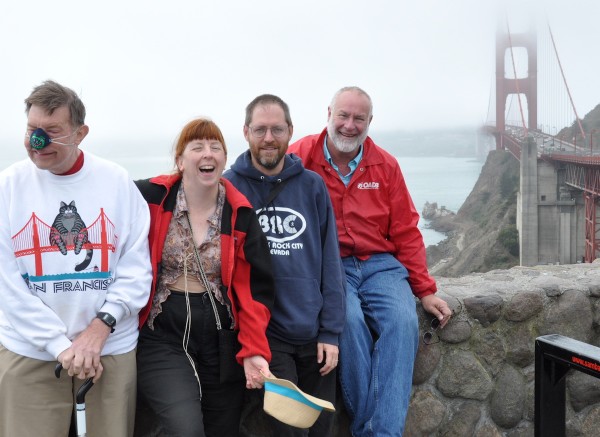 On vacation with Hank, Barry, and Philip at the Golden Gate Bridge

18 thoughts on “Suffering is optional”