I can’t believe how quiet it’s become around here. My ears are tuned to every sound — I recognize the flapping of specific tarps, the slap of specific halyards. So when I heard a small clatter from the fiberglass shed, about 100 feet away, I walked closer to see what it was.

A tiny black cat, with yellow eyes like fog lights, froze and flattened herself to the ground. Nearby, her tiger-striped brother was camouflaged by weed and gravel. They stared at me, fascinated but terrified.

I went back to the boat and returned with cat treats. “Here kitty, kitty,” I called, in a soft voice, shaking the container. Their ears perked up; they knew the sound of food. I put a pile of treats out for them, then retreated to a safe distance. Meanwhile, I kept up a quiet running dialogue, so they’d get used to my voice.

“I know you guys are wondering about Ernie. He’s doing great! He got seasick and threw up, but then he got his sea legs before Blaine and Suzy did. Maybe that’s because he has twice as many… I hope you’re not still mad at them for luring you into the bathroom with tuna and then taking you to the vet. They saved your furry little lives, you know. I’m glad they did.”

The story of Blaine and Suzy and the kittens is one I’ve been meaning to tell for a while. The two cats just reminded me.

The first kittens appeared at the end of May, a week or two after Blaine and Suzy closed up their boat and left for the summer. If they’d been born a couple of weeks earlier, the whole story might have been different — there might not even have been an Ernie. But I’m getting ahead of myself.

There were always a few cats living in the yard. It was hard to tell how many, because they were so skittish, but it was probably three or four. One day, I saw one of them with a tiny gray shadow — a kitten! “What are we gonna do about those kittens?” Dale asked, rhetorically. Momma Kitty was feral, so nobody ever got close to her or the kittens, but she took good care of them. Sometimes I’d see them at 5:30 am, when I was getting up that early in the hot summer.

Then came October, when we returned from our summer travel. I ran into Dale one day, looking disgusted. “That damn cat had kittens again! They’re in the shed over there.” He shook his head, chewing on a toothpick as he walked away. 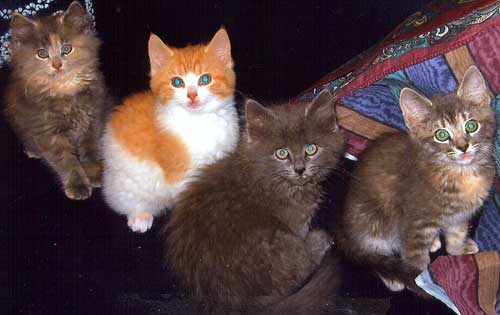 Momma Kitty was now a problem. The unstoppable kitten-making machine had produced eight offspring in five months, with no end in sight. It was a full-fledged Bock Marine Kitty Crisis.

There are always people around who have a special touch with cats. Irene, of Aphrodite, is one of them. She’d been feeding the cats, and she got close enough to Momma Kitty to pick up some of the kittens and pet them. But all too soon, she and Andy launched their boat and headed for the Caribbean. Now what? The employees fussed about the mess in the shed, but nobody did anything.

Then Blaine and Suzy stepped in. To our amazement, they took the four tiny kittens aboard Shirley Jeanne, which is smaller than Flutterby. Momma Kitty was pretty upset, but it was the best thing. Once the kittens got used to being around people, they could be sent out to good homes.

The saga continued through the fall. Aboard Shirley Jeanne, the balls of fluff from the October litter grew into friendly, curious kittens with distinct personalities and names: Faith, Hope, Patience, and Ernie. The ones from the May litter grew into lithe small cats, and we began calling them “the teenagers.” They ran around as a pack, like human teenagers. Sadly, this ended when one of them was taken to the Inhumane Society and put down, and another one simply disappeared.

It turned out that Blaine and Suzy have more than a special touch. They have a mission: Spay, neuter, and save cats. At their home in Oregon, they’ve fostered and rescued dozens, maybe hundreds, of cats. As Nancy Bock said to me, “Isn’t it lucky that when we had a kitty problem, Blaine and Suzy were here?”

I found myself thinking that if the first litter had been born when they were here, Momma Kitty would have been spayed sooner, and the second litter wouldn’t have been born. But that would mean no Ernie. Isn’t Ernie the whole point?

Blaine and Suzy found good homes for Patience, Hope, and Faith, requiring their new owners to have them spayed as a precondition for adoption. Around Thanksgiving, they trapped Momma Kitty, and Nancy had her spayed. And just before Christmas, Blaine trapped the two teenagers in the employee restroom, using canned tuna as kitty-bait. They, too, were spayed and returned. 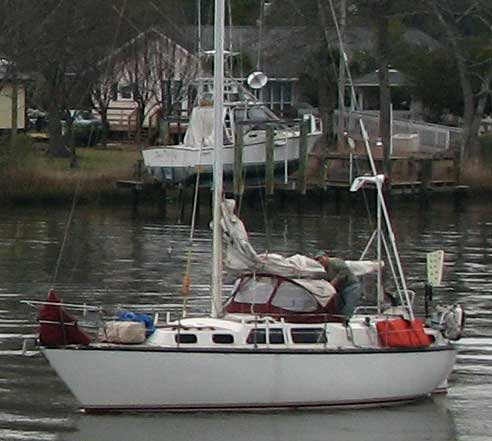 The reason for Blaine and Suzy being in the boatyard, though, wasn’t to rescue cats. They’re accomplished cruisers who’d built a boat in the 80’s, sailing it to Australia and back when their children were infants. Then they settled down and raised the children, selling their first boat and starting to build a bigger, better one. It’s a big project, with a lot of work left to be done.

They wanted to go cruising now, rather than later. So they put the big project aside, rented out the house, found people to take care of their cats, and bought a little boat in North Carolina. It should have been quick and easy to get out on the water, but boat projects never go as planned. Cats never go as planned, either.

They didn’t plan on Ernie.

Suzy advertised the cats with a photo showing all four of them. But whenever someone asked about the gold one, she’d say, “He’s already spoken for.” He wasn’t, but he had a special bond with Blaine. Finally, after they’d found homes for all the others, they admitted they couldn’t give Ernie up. 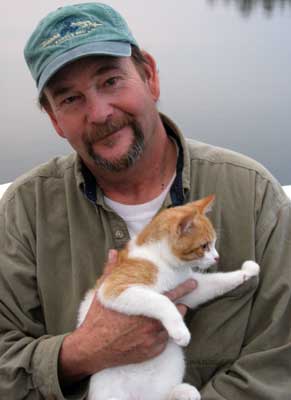 Ernie is the golden kitty — literally and figuratively. He was the smart, funny one of the bunch, the class clown who’s destined for Harvard. Somehow, he ended up with more personality than the other three combined.

As a result, Ernie is now the most spoiled kitten on the planet. He has the run of the boat, and although he will walk on a leash, he usually travels off the boat zipped into Blaine or Suzy’s jacket. When Barry loaned Blaine our red laser, they went out and bought Ernie one of his own to play with. When Ernie got sick, Blaine and Suzy looked more haggard than he did.

They set off a few weeks ago, heading south. Blaine and Suzy and Ernie, leaving behind the other five cats.

Which reminds me of another boatyard where Barry and I lived, in New Orleans. Instead of cats, that yard attracted a couple of stray dogs. The carpenter, Victor, lived on his boat in the yard and began to feed them. After many years, Victor quit and moved his boat elsewhere. The yard owner called him, saying “Hey, you forgot your dogs.” To which Victor responded, “Those weren’t my dogs.”

I love the fact that Bock Marine has cats instead of dogs. But saving cats is not my mission. I’ll do like Victor did, just enjoy them here and now. I am not taking one with me. Because after all, there is only one Ernie.