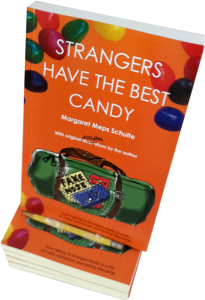 For nearly 50 years, the Diagram Prize has been awarded by The Bookseller of London for the oddest title of the year. On March 27, 2015, Strangers Have the Best Candy became the first self-published book to win this widely-celebrated, international award.

Strangers Have the Best Candy is more than a funny title, though. It’s a charming, thought-provoking book with lots of 5-star reviews. Get your own illustrated copy today:

About the book: Researchers have proven that talking to strangers is good for us. Although their articles have appeared in the New York Times and the Huffington Post, they have yet to answer the question, “How do you get people to talk to strangers?”

Strangers Have the Best Candy is the book that answers that question. Margaret Meps Schulte shares her own stories of chance encounters with strangers, illustrating how such encounters lead to adventure, friendship, and serendipity. Most readers say that when they finish the book, they have an uncanny urge “to go out and find some strangers to talk to.”

From the book jacket:

If you’ve ever had a conversation with a curious, red-haired traveling stranger named Meps, watch out! She probably wrote down what you said…and it’s in these pages, twisted into a hilarious and provocative tale.

In these illustrated stories from chance encounters with unsuspecting strangers, you’ll meet people like:

You’ll learn what really goes into Happy Stew, where to find the Mythical Butter Divide, and why you should always say yes and always take all your stuff.

Most importantly, you’ll learn how easy it is to get your own candy from strangers and why in the world you would want to.

Available from these independent booksellers: