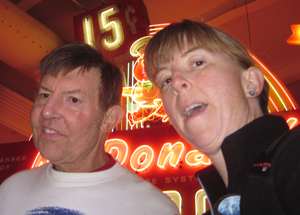 Smile for the camera!

When I arrived at Hank’s apartment in Ohio, ready for our vacation together, he gave me a present. “Here,” he said, handing me a toothbrush. “I got one from my dentist last week, and he said to give you one, too!”

I’ve never met Hank’s dentist, so why would he send me a toothbrush?

The answer is my brother’s infectious enthusiasm. He’d been living in anticipation of our road trip for months, talking about it with everyone he met. It’s no surprise that his dentist would send me a bon voyage present.

Or maybe he just knew that traveling with Hank, people would see my teeth, because I’d be smiling a lot. 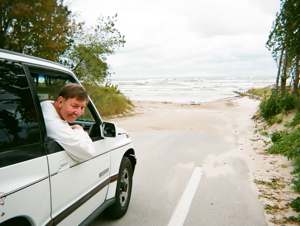 Hank in the Tracker

In the meantime, I’d been feeling apprehensive about the trip. I’d just spent three weeks not having to answer to anybody, even my husband. Now I was taking responsibility for someone who seems healthy and strong, but is actually a little fragile. Hank told me he’d recently had an epileptic seizure at night and woken on the bathroom floor in the morning. That terrified me.

Then there was the pressure from people who looked at me like I was some kind of saint. When I explained to my new friends in Summit that I couldn’t stay for the Fog Festival because I’d promised a road trip to my disabled brother, Mike said, “It takes a special person to do something like that.”

The truth is, I’m not a saint or a special person. I’m a hedonist, and I expected this trip to be fun. Some fun just takes more effort than other fun.

Finally, after all of Hank’s anticipation and my apprehension, we set out on the road.

At Canadian Customs, the traffic director in the orange vest leaned on the window for a chat.

From the passenger seat, Hank told him, “My sister is taking me to Canada because I’ve never been there.” That’s when the man realized that Hank was special, and he looked at me like I’d suddenly sprouted a halo.

“I have a special needs daughter,” he said. “I hope someday her brother and sister will take her on vacation…”

I smiled and said, “You know, it just depends on the example their parents set.”

He nodded thoughtfully. “God only gives you what you can handle.”

Two days into the trip, I realized that this sister had taken on more than she could handle. It was the most exhausting travel I’ve ever done. How could someone so slow make me run so fast?

I found myself crawling on my hands and knees, looking for a tiny dropped pill. I listened through the bathroom door for 10 minutes as he argued — out loud — with the shower curtain, trying to get it to stay inside the tub, then, exasperated, his voice now several octaves higher, he called me in to help. I unloaded our luggage, carried it to our room, and in the morning, carried it out again. Back on my hands and knees, I checked for lost items under the beds. “Is this your toothpaste?” I asked, finding it there.

As we drove across Canada and the midwest, I gave Hank a running description of the scenery he couldn’t see. To my surprise, he didn’t respond to many of the things I pointed out. I’d be describing a cute Halloween display or reading a funny sign, and he’d interrupt me and start talking about a frozen dinner he’d eaten last week.

Our worlds were out of synch — why was he always talking about the past or the future? Why couldn’t he live in the present moment with me? He was happy, but would he have been just as happy at home?

It wasn’t until after the trip was over that I understood. Hank’s brain works differently — he gathers life’s experiences, stores them up, then processes them at his own speed. He simply can’t process them on the fly.

He actually told me at one point, “I think better when I’m sleeping.” 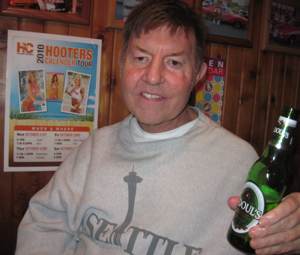 Hank with his "beer" at Hooters

A day or two after each event, he’d begin to relive it with greater and greater relish. One example of this was in Detroit. I asked him, “Hey, Hank, have you ever been to a Hooters?”

“No, but I’ll buy you dinner!” Obviously, he knew something about Hooters.

Once inside — neither of us had ever been in a Hooter’s — Hank was a lot more interested in the baseball game on the big-screen TV than in the waitresses. He ate his chicken and drank his non-alcoholic beer, and when we were done, I got a picture of him with six sexy smiling waitresses.

He did notice that their shorts were kinda short. “What do you call those again?” he asked me. “Hot pants,” I told him.

A couple of days later, he was on the phone with his friend, Juanita. “The waitresses were wearing these, um, orange, um, hot pants,” he told her. “And I got a picture with all of them!” 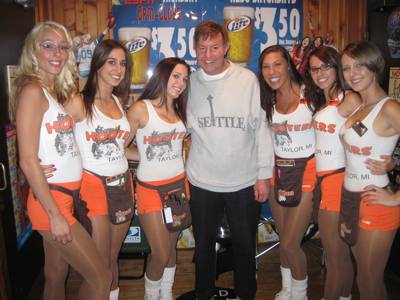 Watching him interact with people, I could see why we had to do this. Taking Hank on a road trip was like giving the gift of a smile to many people. He’s so bubbly, he makes people happy. That sort of happiness needs to go on a road trip and be spread around. Even if it wears out his driver.

When we got back to his home, Hank had finished his processing. The trip was a huge success, and he couldn’t wait to call his friends. I heard him telling them about the big storm on Lake Huron, the Ford plant, the museum, the restaurants, and the nursing home where we’d visited our aunts. He couldn’t wait to get his pictures developed, and he couldn’t decided which of his new t-shirts to wear first. He had presents to deliver, too.

A couple of days later, we got together with Steve and Carol to eat pizza and catch up on news. Carol and I went upstairs for girl talk, and Steve and Hank sat outside making guy jokes and drinking non-alcoholic beer. Eventually, the guys came bounding up the stairs with some big news.

“We’re planning a trip to Niagara Falls next year!” they told us. “We’re going to rent a minivan, so we can all go together!”

I was flabbergasted. I looked closely at Steve, who was rattling off the details of the trip they had planned. Was that a faint halo over his head?

Before I left Columbus, Hank asked me, “Am I still fun to take on vacation?”

“Absolutely!” I said, with enthusiasm. I’d caught up on my sleep (while he was at work), and now I was anticipating the future eagerly. Steve and Carol and Barry and I may all need new toothbrushes — we’ll be smiling a lot, at Niagara Falls next year. 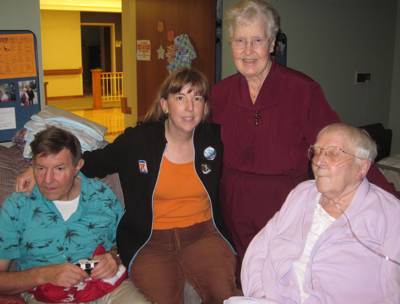 Hank and Margaret with Sisters Mary Pat and Mary Julia 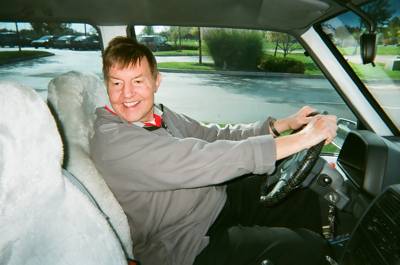 Watch out! The blind guy is driving! 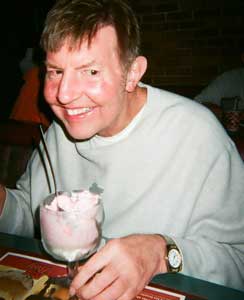 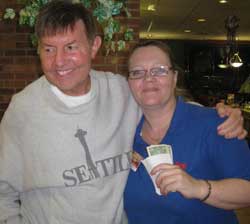 1 thought on “Smiling so much, you need a new toothbrush”