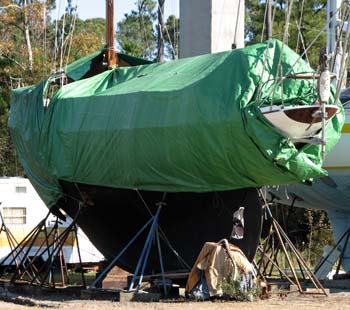 When the giant green tarp came off, a beautiful boat was revealed. She was long and slender, a classic design evoking an earlier era.

The beauty was marred, though, by the piles of dusty and mildewed gear that appeared on the ground under the boat. I wandered over to meet the new arrivals. “Looks like you’re having a yard sale over here,” I quipped.

Susie and Ron had the look of aging hippies — gray hair in a ponytail, young eyes surrounded by a network of sun-baked smile lines. Susie was wearing a path to the “free” table in the lounge, donating large jars with handmade burlap covers and labels that said things like “bulgur.”

Friendly, but too busy to talk.

A day later, their adult son, Ocean arrived, along with two of his friends. The story emerged in the form of boatyard gossip, with everyone contributing the tidbit he or she had garnered from the busy crew.

Ron and Susie had cruised Catania for 22 years, and Ocean had been born aboard. Now the parents had “swallowed the anchor,” living ashore in Maine. After six years, they realized they weren’t going to cruise on the 71-year-old boat again. Storage fees had added up to nearly the value of the boat.

I wish I knew know who came up with the plan — whether Ron and Susie offered, or whether Ocean asked. But the plan was this: To refit Catania and then hand her off to Ocean, who would sail back to St. Thomas. The timing was tight, so the young man recruited two friends to help with both the refit and the delivery.

The crew worked so fast and so hard that the rest of the boatyard community watched, astonished, with something like envy. While Barry and I agonized over tiny fiberglass patches, Catania’s crew fiberglassed the entire topsides. While we worried about painting the pads under our stanchions, they painted the entire boat. We haven’t even figured out what engine mounts to install, and they replaced their entire engine. One of them even carefully hand-painted the name of the boat on the sides of the classic yacht. 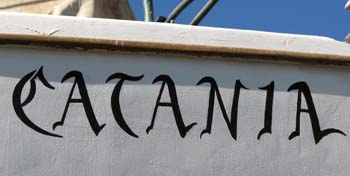 At night, the five of them, plus an aging German Shepherd, retired to a small tent trailer in a secluded part of the boatyard. We never saw them, except during daylight hours when they were working flat-out.

Finally, after about three weeks, they launched the boat, and she sat at the dock for a couple of days. The frenzied preparations continued, and the air was full of anticipation for the crew of three young men.

On a Sunday morning, the boys left Bock Marine. From the high vantage point of my deck, I watched the hugs and group photos. As they slipped the lines, Susie called out “Bon Voyage!” It was a touching moment, watching the older generation turning the family home over to the younger generation.

I ran into Susie a little later. She looked vibrant and happy; Ron looked tired. They were doing final cleanup and giving away even more stuff. We took the Britta pitcher; Blaine took the table saw. Then the truck was gone, headed for Maine. Where the boat had been was an empty space full of jackstands, cribbing, an old engine, and an abandoned windsurfer.

That night, I went into the lounge. “Did you hear? Catania is back at the dock. They had a leak.”

“Bummer,” I said, thinking of our friend, Dan, who has launched his boat four times and had to pull it back out for repairs each time. This sort of thing is not uncommon.

On Monday morning, I saw the three young men on deck, folding sails. Susie and Ron, who had been well on their way to Maine, returned around mid-day. Susie was smoking a cigarette, something I hadn’t noticed during the previous three weeks.

The Travelift came, hauled out the boat, and returned it to the original spot. What happened next left me incredulous.

They put the kelly green tarp back over the boat. Then the three young men got into a rental car and headed for the airport. It happened so fast, the gossip couldn’t keep up.

I ran into Susie a little later. “They got out the inlet, but they had some concerns. Ocean’s not sure what he wants to do, maybe come back next fall, or else we’ll sell it.” She seemed a bit shell-shocked.

“But, but, but…” I spluttered, unable to understand. By my reckoning, if they had two weeks planned for the passage, they had two more weeks available to work on the boat.

In just a few hours, the story went from heart-warming to heart-breaking. If I hadn’t been here to witness the drama, I wouldn’t believe it.

We’ve been working off and on for almost a year. Val and Gigi have been here a little longer, and Oscar has been here for over ten years. But our slow-but-steady pace allows us all to make progress, enjoying the process, without burning out.

As a reminder of this, Catania sits quietly under her green tarp, waiting for Ocean to return.