To the man I shrieked at last April, who was waiting to use the bathroom, I apologize. I was unable to explain at the time, but here’s the whole story:

I was sitting on Flutterby, hauled out in the boatyard in Georgia, and I needed to use the bathroom. It was the middle of the day, the sun was out, and the distance was only about 50 yards. Yet I lingered on the boat, shaking and trying to get up my nerve.

Finally, I put my head down and went slowly down the stairs. I trudged across the sandy lot, looking intently at the ground. My hands were clasped tightly around my elbows to dampen the shaking. Out of the corner of my eye, I saw an alligator. I looked again and realized that it was only a small statue, a piece of yard art. But it was too late: Adrenaline was already surging through my system and taking over my brain. The pure chemical reaction made me want to run for my life, screaming.

But even after ten minutes in the bathroom, I couldn’t stop shaking with fear. I stood with my hand on the doorknob, and some prehistoric portion of my brain was screaming, “Alligator! Alligator! It’s going to eat you! You’re going to die!”

Unfortunately, while I was having my crisis in the bathroom, I didn’t realize that a nice gentleman was now waiting to use the facilities. I was so shocked to be face-to-face with a 6-foot human being that I gave a bloodcurdling scream. Then I ran all the way back to the boat and didn’t come out for a couple of days.

At the time, I had no idea what was wrong with me. A few weeks later, I got an answer: Generalized Anxiety Disorder, or GAD.

In a given year, nearly 18% of American adults will be affected by some form of anxiety disorder, including GAD, PTSD, social anxiety disorder, panic disorder, and obsessive-compulsive disorder.  As you can see from the alligator story, GAD is not a simple matter of worrying about the economy or whether the boat will go aground. Sufferers are unable to cope with excessive, irrational fear of things that are not actually very threatening, like a concrete alligator or a trip to the post office. 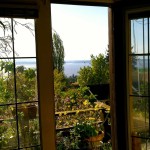 A healing view of Puget Sound from West Seattle

My initial reading about the problem helped a lot. Then I returned to Seattle for months of medical treatment. I had ups and downs. Some days, I got dressed to go to the post office, but I never made it past the bedroom door. Other days, I seemed fine, giving public presentations and newspaper interviews and pitching my book, Strangers Have the Best Candy. All summer, I stayed close to home, never knowing when something unexpected would trigger me.

I had made incredible progress by August, when Barry and I set out on a 2,000-mile road trip in the Squid Wagon. I did fine in Eugene, Oregon, visiting with family. We continued south to see friends in California — Alameda, Oakland, Santa Clara, and Santa Cruz. By the time we reached Burning Man, I felt like myself again. Out in the middle of the desert, in the most inhospitable circumstances, I was joyful and strong.

I had arrived back to myself just in time. Five days after arriving at Burning Man, I came down with appendicitis and landed in a hospital in Reno!

Obviously, I survived. I even made it back to Burning Man, and I have some great stories to share. But I wanted to write about the alligator incident, because I’ve struggled with anxiety disorder all summer.

Please, have compassion for people who are acting strange; you have no idea what internal struggles they are facing. And if someone comes out of the bathroom, screams, and runs away, don’t take it personally. She thought you were an alligator, but she’s better now.

4 thoughts on “Shrieking at Strangers”