I came back from Burning Man a changed woman. Not in any large, obvious way. Just a few little things. The world seems like a funnier place now.

I dyed my bangs pink. Then I put on the sweater vest I borrowed from my sister, Daisy. It’s neon orange and very rectangular, knit with half-inch fuzzy strands. I looked like a neon-orange fuzzy varigated box with arms. As I went out the door, intent on my project, I didn’t pay any attention to the fact that I was also wearing black sneakers, blue socks, and a pair of bright red patterned pants.

For a couple of hours, I was working on the van, parked on the side of the street. I didn’t want to get run over.

“I think you’re more likely to cause an accident,” said Barry.

When I came back in, a couple of hours later, I told him I’d finally gotten to meet the neighbor next door. “In THAT?” he squawked.

“Oops,” I said, a little chagrined. I’d forgotten about the pink bangs.

The next day, I stopped by the thrift store to see what kind of fall additions I could find for my wardrobe. I found lots of things I could have worn at Burning Man, but had to keep reminding myself that those things are not suitable for Seattle. I’d been looking through the lingerie rack, forgetting that most people wear such items only to go to bed.

My crowning moment came yesterday, when I looked out the kitchen window and noticed two young fellows in black pants and white shirts walking down my street.

Don’t get me wrong, I have nothing against Mormon missionaries. I find their doctrine pretty interesting. But I wasn’t in the mood right then to have a conversation with two serious, earnest young men.

If I stayed in the kitchen, they were sure to see me through the blinds and come to my door. So I did the logical thing. I went into the bathroom, where Barry was taking a shower. “Hide me!” I said in a loud stage whisper. “They’re out there! On the street!”

“What? I can’t hear you,” he shouted. Of course, he couldn’t hear me over the sound of the water, but I was whispering because the window was partially open, and I was sure the fellows were right underneath it. I turned down Barry’s chivalrous invitation to join him and cowered on the dry side of the shower curtain.

After a few minutes, I thought they were gone. I went back into the kitchen and closed the blinds. If they did come back, I wouldn’t have to answer the door.

Then I noticed the Burning Man costume box. Just as I was wishing they would come back, there was a knock on the door. 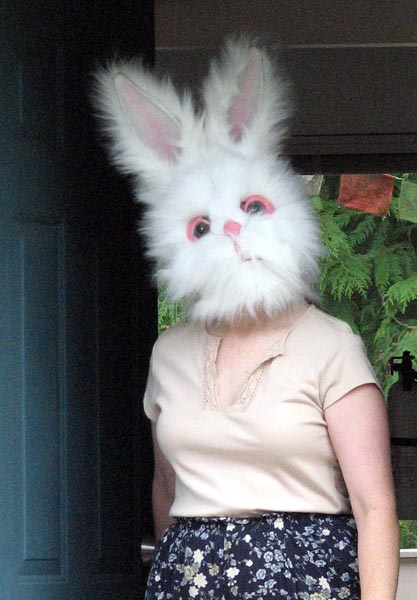 So I was wearing a very large, fierce rabbit head when I opened the door for two young Mormon missionaries.

They jumped back about a foot. “Oh! You scared us!” they said.

Afraid of a cross-eyed rabbit?

“Sorry about that,” I said politely, as if I was not wearing the rabbit’s head. They were at a loss for words, looking at each other for reassurance. Was this really happening to them? Were they really talking with a giant rabbit?

I wasn’t sure what to say, either. I guess that was when I should have asked if they believed in the Easter bunny. Instead, I gave them a gentle warning, not wanting to waste their time.

“I have to tell you, I’m not able to hold a serious conversation right now.”

That part was absolute truth. The giant mask was hiding a huge grin that threatened to turn into all-consuming giggles.

They looked at each other. Evidently, whatever they wanted to talk with me about was serious.

“Um, do you know of any of your neighbors who might be interested in our message today?” the freckled one asked.

“No, I don’t know my neighbors very well. They think I’m weird.” the rabbit answered. The two fellows grinned, then quickly stifled their smiles and looked at each other again. Evidently, they thought I was weird, too.

“Well, we just wanted to invite you to come to our Sunday service.” They told me where the church was located, and seemed very surprised when I said I knew where it was. Maybe there was hope for this rabbit, after all.

As they turned to go, the taller one said, “You’re welcome to come to church, with or without the rabbit mask.”

I nodded my giant furry head and foot-tall ears. “Thanks! But if I come without it, you won’t recognize me.” He quickly glanced back at me. Maybe I was a member of their church already! But only the rabbit’s inscrutable and slightly disturbing face looked back at him.

They wished me a good day and made their way off the porch. I closed the door and only then could I collapse on the floor, tears of laughter running down my face.

Barry came hopping out of the bathroom. He couldn’t see the laughter, only hear the strange burbling sound and see the shaking shoulders of a large rabbit sprawled on the kitchen floor.

Pass the carrots, will ya?