A couple of weeks ago, we heard that some seriously bad weather — namely, snow — was headed to coastal North Carolina. Although it seemed counterintuitive, we could avoid the cold by going north. So we jumped in the Squid Wagon for a road trip.

It will come as no surprise that our destination was a pot pie supper in Odessa Simpson’s cozy farmhouse kitchen. Barry was eager to participate this time, especially since he’d seen both my Pot Pie Nirvana video and the Sand Tart 101 video sent by our friends from Bird-in-Hand, Pennsylvania.

Along the way, we stopped at a Piggly Wiggly grocery store and bought every single can and bottle of Cheerwine soda they had. We delivered the cherry-flavored beverage to Mike and Wes, who can’t buy their favorite soda in Pennsylvania any more. 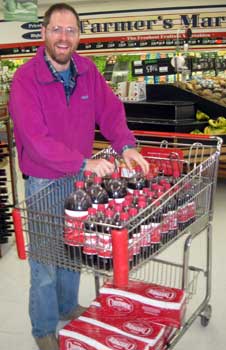 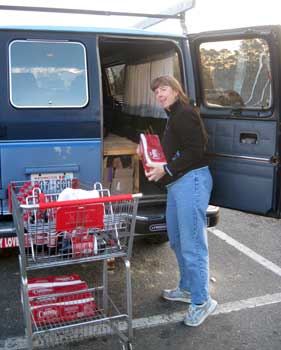 The Squid Wagon could have held 20 times this much Cheerwine 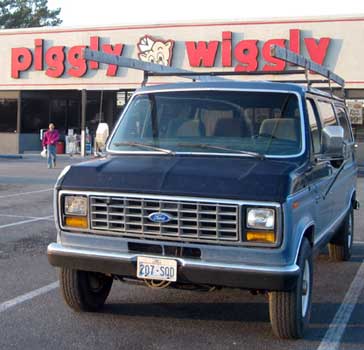 Piggly Wiggly: The best place in the South to buy Cheerwine or wiggly pig parts

Just as expected, the snow passed south of us. Washington D.C. got enough to paralyze the city, which only requires about three snowflakes. We enjoyed a romantic dusting, with fluffy flakes falling past the window as we rolled out pot pie dough. There was lots of hanging out and talking, watching videos, cooking, eating, and we even got to see Avatar in 3D. A perfect weekend with our borrowed family.

When we packed the van, the Cheerwine was gone, but we were now carrying a  family-sized tub of leftover pot pie. I wondered how we would eat it all. 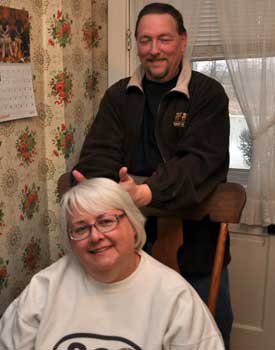 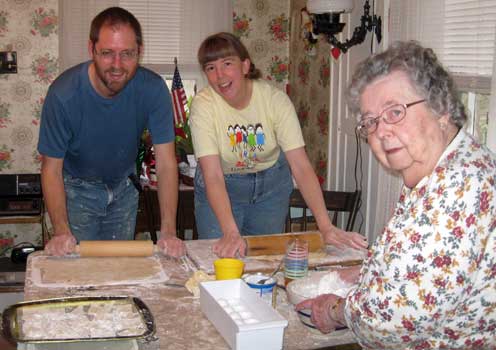 Rolling pot-pie noodles while Odessa mixes up the dough

By Monday evening, D.C.’s snow had melted enough that we could drive to our second destination, Alexandria, Virginia.

We hadn’t seen the Johns family for over a year, and that makes a big difference. Not only do the kids grow up so fast, but Sandy is always adding to her fun house collection. That’s fun house, not funhouse.

The last time we were there, for a Memorial Day party, three Slurpee machines, one cotton-candy machine, and two ice-cream makers were all cranking out cool treats, while a steady stream of burgers and chicken came off the gas grill. There was a pile of extra bathing suits so that kids who hadn’t brought theirs could go in the pool. Downstairs, in the TV room, shelves were stacked floor-to-ceiling with games, movies, and books. Another room was full of craft supplies. There was a friendly dog, a Sheltie, and a cat who didn’t mind being carried around upside-down by small, well-meaning children.

Isn’t growing up in a house like this every child’s fantasy?

But wait, there’s more! When we arrived last week, we discovered additions: Three pinball machines and a multi-game video console. I noted a commercial-style popcorn cart and a new hot dog oven, too. 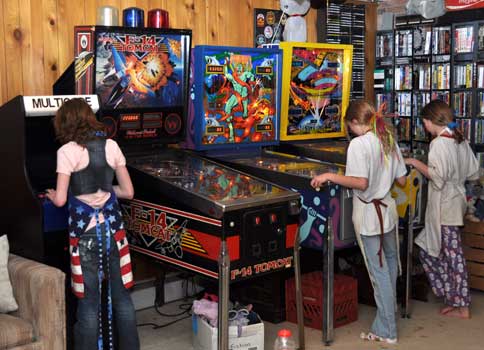 The day we planned to leave, there was another little snowstorm, enough to close down the schools but not keep Andy and Sandy from going to work. It was so much fun hanging out with Cindy and Becky that we stayed an extra day.

Despite all the fun toys in the TV room, February’s action was all in the kitchen. Cindy had been selected as a student ambassador with People 2 People, and now she needed to raise money for a summer trip to Europe. Her Mom had an ambitious idea: Why not set Cindy up as a cookie-baker? So they created an email address, cindythecookiegirl@gmail.com, made posters, and sent out an email blast. The response was overwhelming. It seemed like everybody wanted to order The Cookie Girl’s giant heart-shaped, decorated cookies for Valentine’s Day.

For a couple of days, the Kitchen-Aid mixer seemed to run non-stop, and Barry and I pitched in to help. Mainly, we took photos, ate test batches of oatmeal, chocolate-chip, and sugar cookies, and made meals that did not involve sugar, butter, and chocolate chips. We shared our pot pie leftovers and made chili and cornbread. Mostly, though, it was like our visit with Mike and Donna. We were just reveling in borrowed family, enjoying the warmth of a home.

The weather forecasters began predicting another snowstorm, the one they called Snowmageddon and Snowpocalypse. It was time to go. The pot pie was gone, replaced with a beautiful 12-inch heart-shaped sugar cookie that Cindy had decorated with our names.

About an hour after we arrived at the boat, two special guests arrived. Barry’s aunt Jeanine and her partner, Jim, were on their way south from Rhode Island to Florida, and wanted to check on our progress. In a small-world coincidence, Jim is a sailor who had once hauled his boat at Bock Marine for a month. They’d visited us over a year ago, and we had a lot of projects to show off. 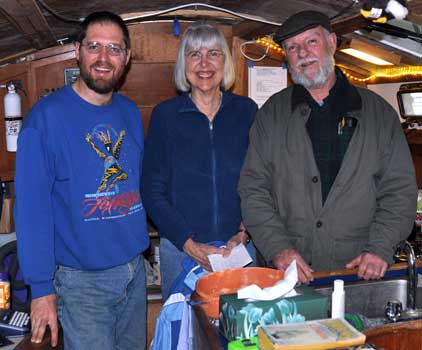 Barry, his aunt Jeanine, and her friend Jim aboard Flutterby, after eating some of the giant cookie

Now the yummy circle is complete. The Cheerwine went north to one borrowed family, the pot pie leftovers traveled to the next borrowed family, and the cookies came back with us, to be shared with relatives and our borrowed boatyard family.

We aren’t able to avoid snow — it’s predicted for the boat tonight. But the food-as-love that we brought back with us is keeping us warm, and will for a long time.

(More photos are below — there were so many good ones!) 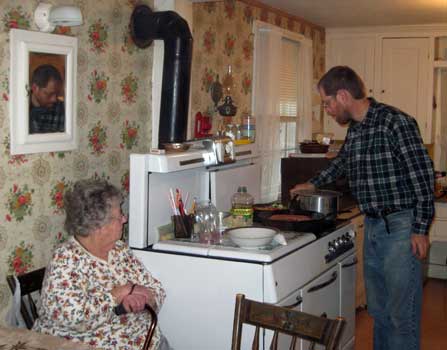 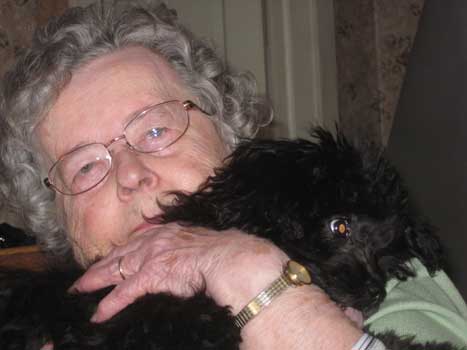 Odessa Simpson loves both people and animals. This is the neighbor's dog. 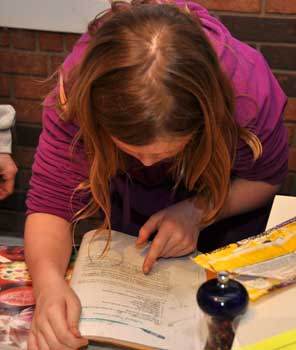 Cindy checks a cookie recipe before beginning to bake 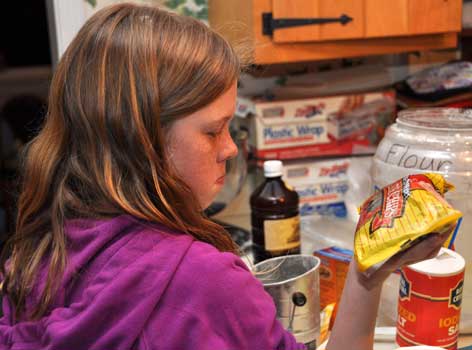 Cindy looks over a bag of chocolate chips for her cookies 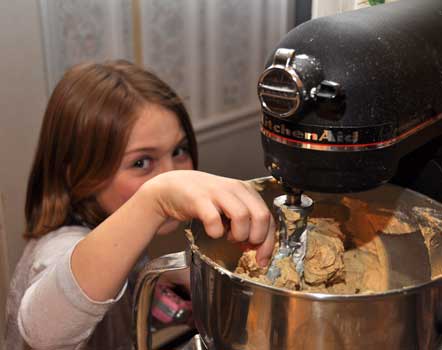 Becky does a taste test of the unbaked dough 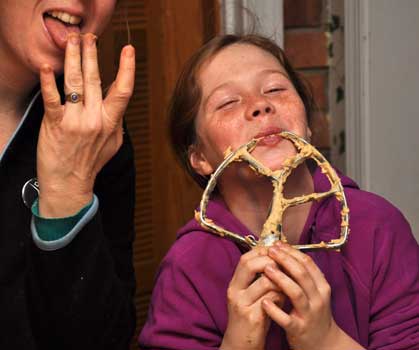 Cleanup is the best part! 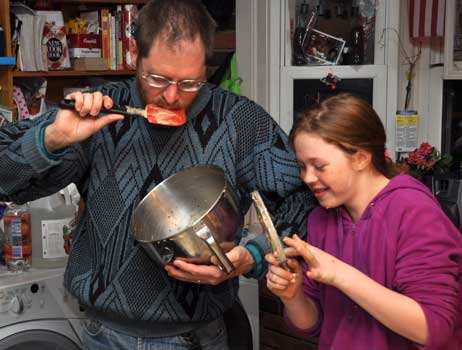 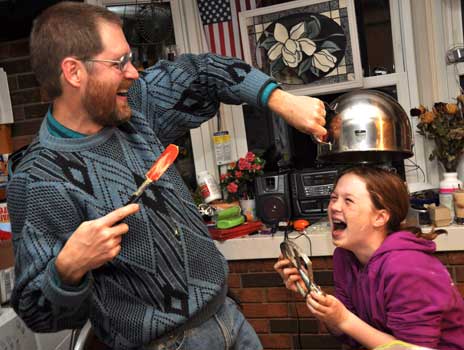 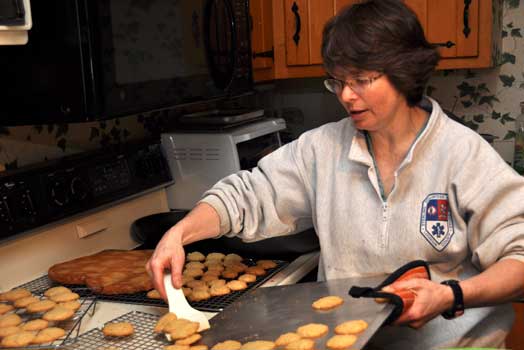 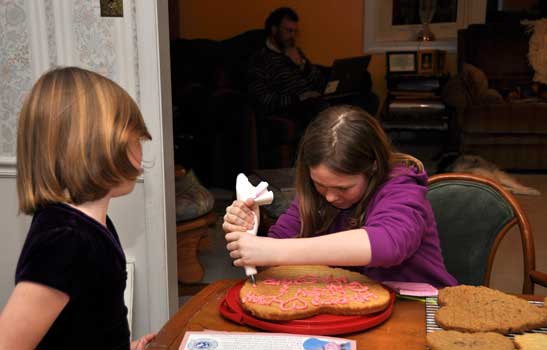 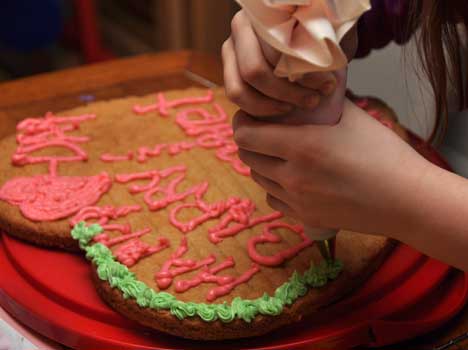 The text reads "Happy V-Day Barry and Margaret, from the Johns" 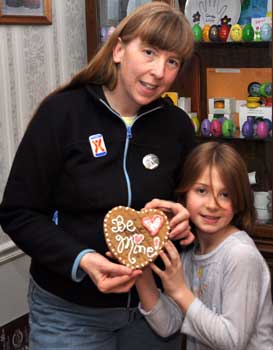 Becky and I show off the cookie that I decorated

3 thoughts on “Plenty of cheer to go around”