Paparazzi: It’s not something I ever expected to experience. I’m no celebrity, let alone a beautiful one.

Flutterby, though, is a beautiful lady. So on the afternoon of Tuesday, November 30th, when we finally launched her, there was a veritable army of friends and photographers on the dock.

We woke up before first light that morning, knowing it was going to be a Big Day. First, there was a lot of work to do, like sorting docklines and fenders (and dealing with the icky nest of giant cockroaches in the box with them), completing the steering installation, and emptying and cleaning the fuel tank (also icky, but the ick didn’t move as fast as the giant cockroaches).

Suddenly, it was time to launch — and to be celebrities. For from 2:04 pm, when the Travelift roared to life and headed in our direction, to 3:05 pm, Flutterby was the subject of more photos on more cameras than I’ve ever faced at once. There were over 100 photos taken of and by us in 61 minutes.

Unfortunately, I had not dressed for a Big Day. I was wearing my usual unflattering boatyard clothes, which I hated with a passion. I planned to throw them in the dumpster before leaving the boatyard. Now I wish I’d done so before launching, as they are immortalized in all the photos. (A few days later, I gleefully tossed the pants, shirt, and shoes into the dumpster, keeping only the socks and underwear. Kris’ pants were disposed of in a more interesting fashion. More on that later.)

The entire experience was a blur. Was it hot, cold, or windy? Did it rain? Dale and Richard are wearing foulies in the photos, but I don’t remember weather hampering our efforts. Who was behind all those cameras on the dock? Did I eat anything that day? From the photographic evidence, I suspect we ate tortillas, carrots, pork rinds, and chocolate. (Not at the same time — I’d remember THAT.) I do remember the champagne. It was definitely not consumed at the same time as the pork rinds.

When the excitement was over, we floated serenely in the ways, leaving an empty space where our boat — and our hearts — had been for years.

Photos are below (on the web)…but not all of them. 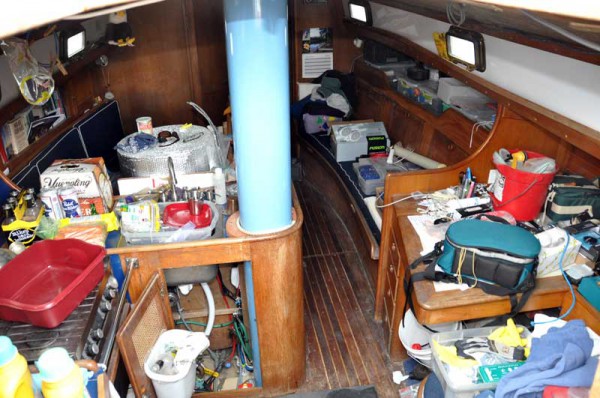 Thankfully, nobody but the crew could see inside the boat -- what a disaster! 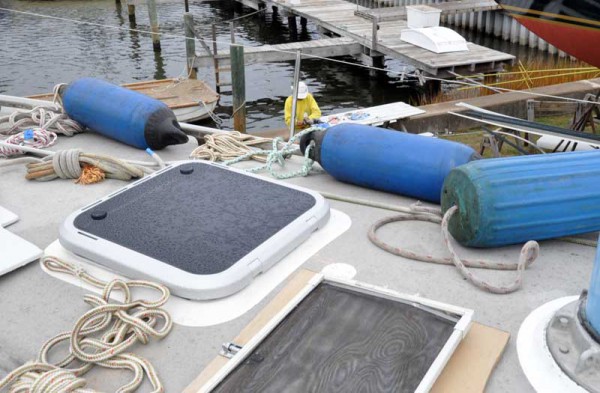 In the morning, Kris polished steering hardware while I got fenders ready (the cockroaches moved too fast for pictures). 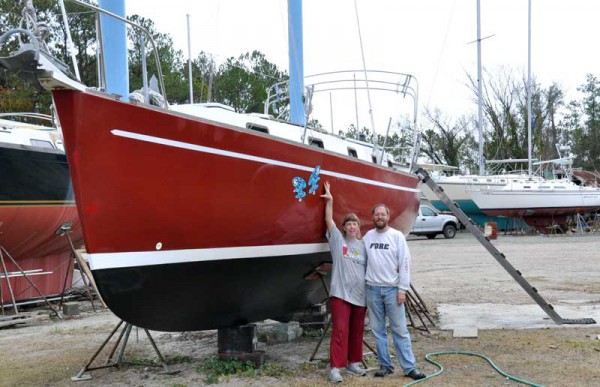 One last picture of our home on the hard. Alex Baker had put the Flutterby logo on in the dark the night before. 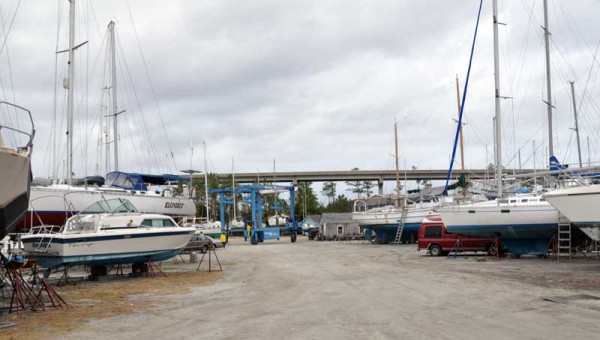 Eek! The Travelift is coming and we're not ready! 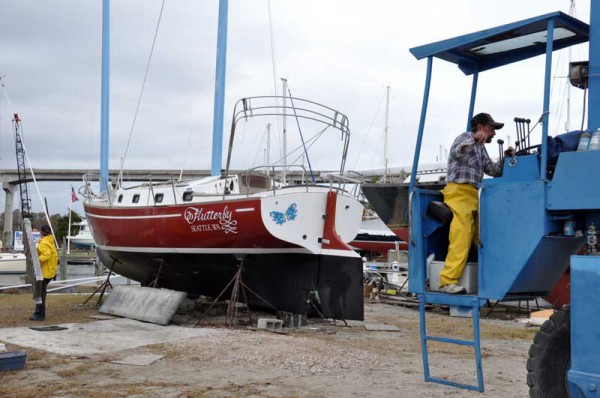 Dale maneuvers the Travelift into position. This is a man you can trust to be careful with any boat. 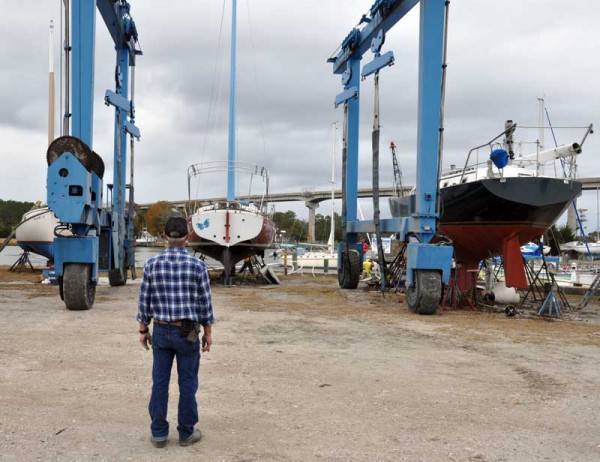 Kenny guides the Travelift into place between Bulldog and our Gulfstar neighbor. The whole time we were here, work on the Gulfstar had ceased because the owner is fighting cancer. 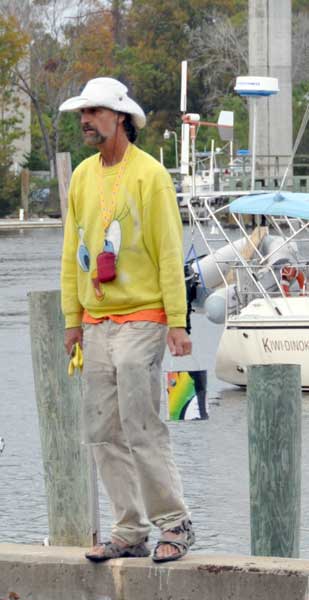 Kris, in the infamous Tweetie sweatshirt, stands ready with bottom paint, brush, and gloves to paint the last bits. 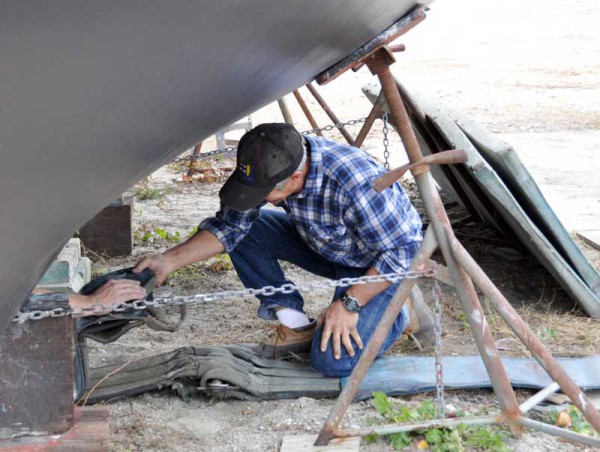 Kenny Bock and Rich crouch under Flutterby to put the straps on. I spent a lot of time crouching under the boat, so I know this area well. 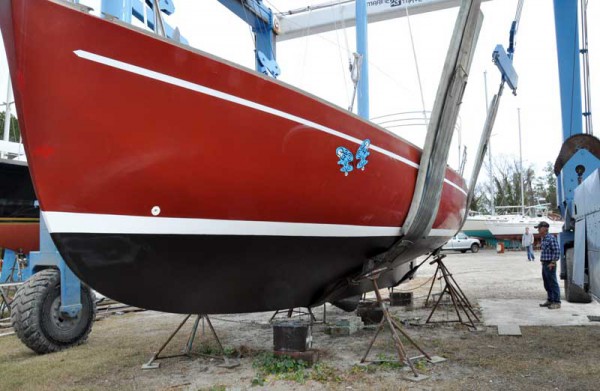 Flutterby flies! She's lifted off the blocks for the first time in 2-1/2 years. 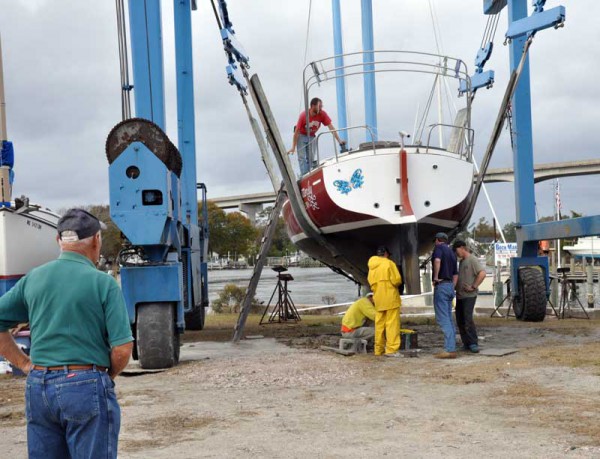 An army at work on last jobs -- Ted watches, Barry lowers the centerboard, and the other 4 fuss with our zinc. 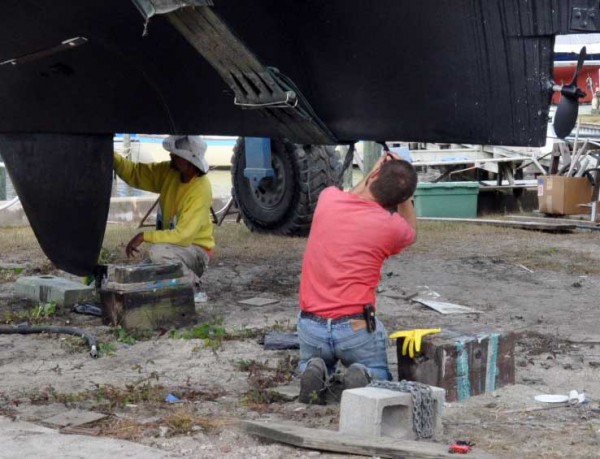 'A bigger brush would have been nice,' said Kris, as he repainted the centerboard at the last minute. I thought he was just going to touch up the keel where the blocks were. 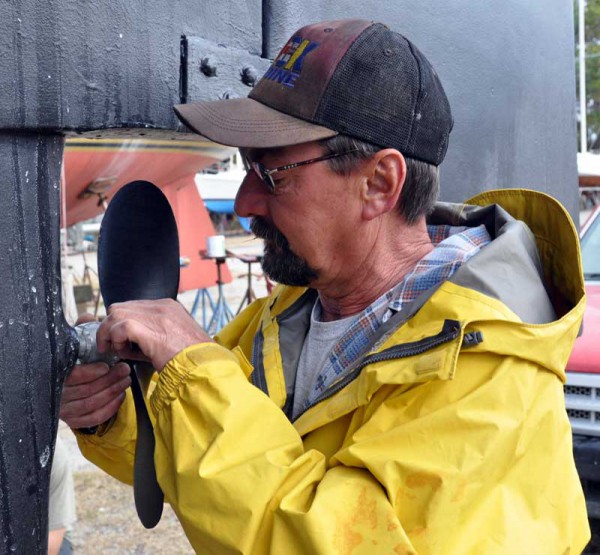 Dale said our zinc didn't have enough clearance, so he took it off and filed it down to fit. Next time, we'll use a donut zinc. 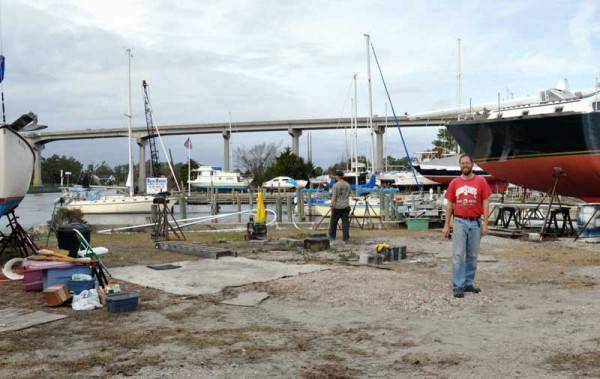 Where did Flutterby go? 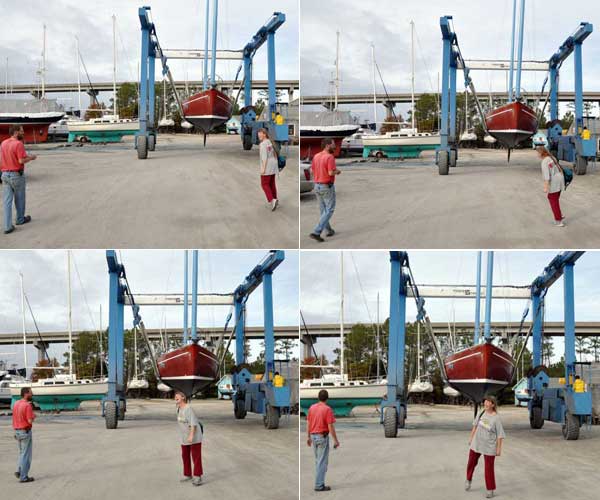 A little 2-person parade, dancing along behind the Travelift. I wish we'd had music for this part! 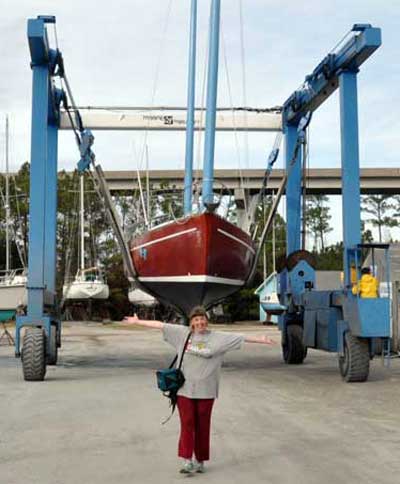 An exuberant girl with her boat 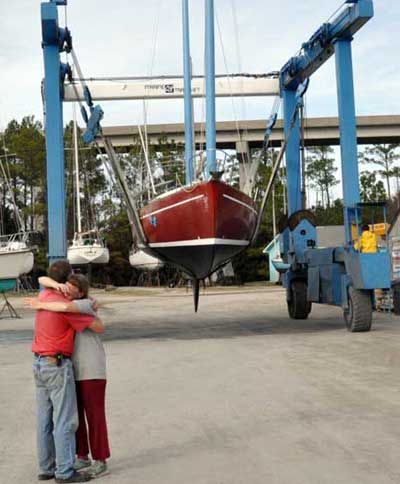 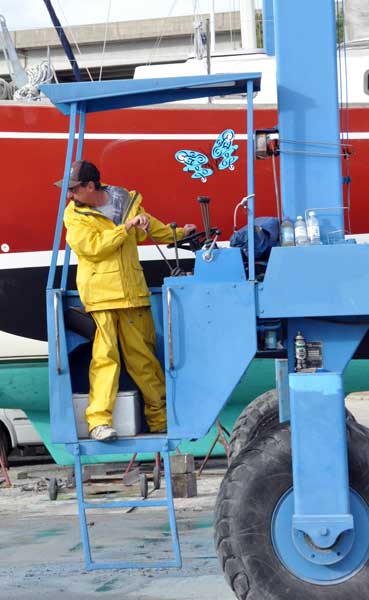 Dale backs into the ways, the Flutterby logo behind him. 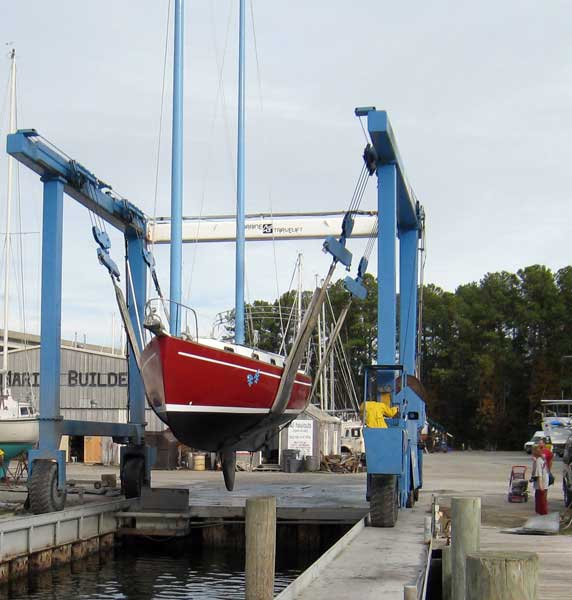 Lowering Flutterby down into the water. 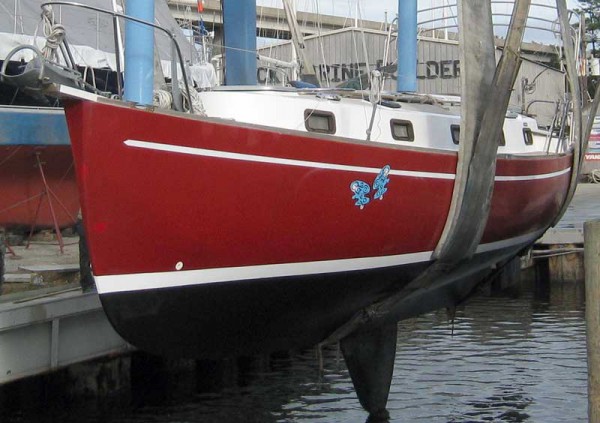 Flutterby's centerboard touches the water. We literally had grown roots on the hard -- there were weeds growing in the centerboard trunk. 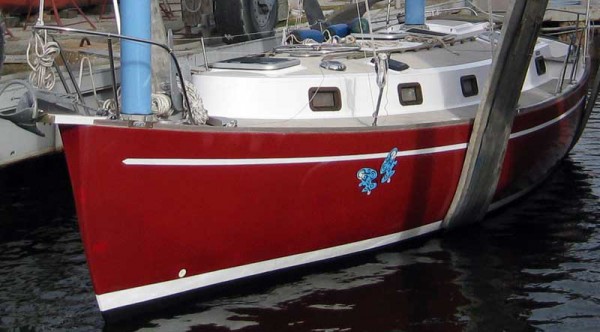 Flutterby, floating in her native element at last. 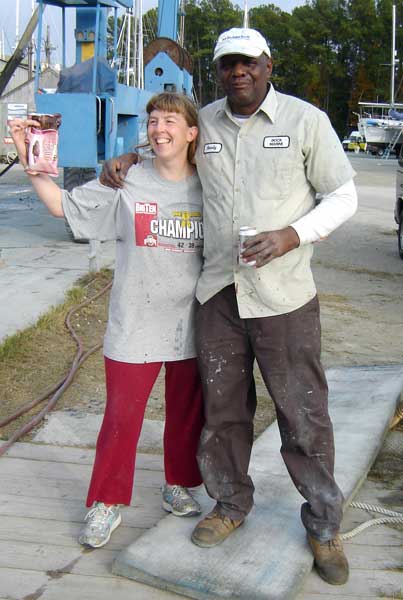 Meps celebrates with Randy, whose smiling face had greeted us in this same spot when we hauled out in 2007. 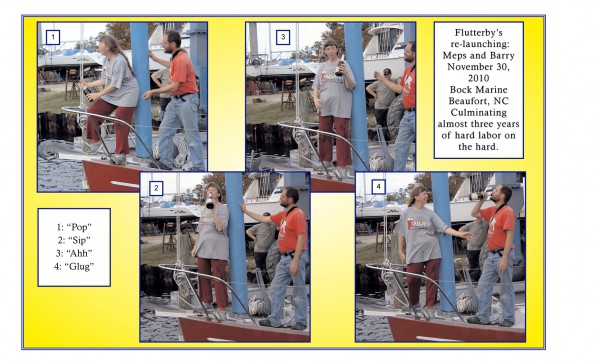 There were many photos of the christening. Ted's version, with captions, is the BEST. He printed this out and posted it in the lounge. (click to enlarge)