A couple of months back, Barry and I went for a walk in Seattle’s Ravenna neighborhood. At the intersection of two side streets, I saw something that made me smile — children had decorated the pavement with colored chalk. There were drawings, words, and patterns all over the intersection and extending down both streets.

It was such a simple idea, I had to borrow it.

A few weeks later, we were preparing our gear and costumes for our third annual trip to Burning Man. We had a list of things to do — build and test our shade structure, sort out costumes, and pack camping gear designed for “radical self-reliance” in the desert. There was also an item on the list that said, “Create Happy Spot.”

Using yellow signboard and Sharpie markers, I made a couple of hand-lettered signs. We found some yellow-and-black smiley face lights to put on them, and Barry’s Mom donated a sheet of happy face stickers that had come from Highlights for Children.

We took some good-natured ribbing from our more prurient friends. “Oh sure,” they said, rolling their eyes, “you’re gonna set up a Happy Spot at Burning Man. We can’t wait to see THOSE pictures.”

It’s true, there are many R- and X-rated things at Burning Man. But it’s also true that in our first two years, we’d somehow managed to miss them. There are enough PG-rated activities to keep anyone entertained for a whole week, and if we wanted the Happy Spot to be PG-rated, it would be.

On the first day, we set up our Monkey Hut shade structure, festooned with a fringed drapery and floral sheets. Then Barry installed the large Happy Spot sign at the top. Now our tiny camp *was* the Happy Spot. 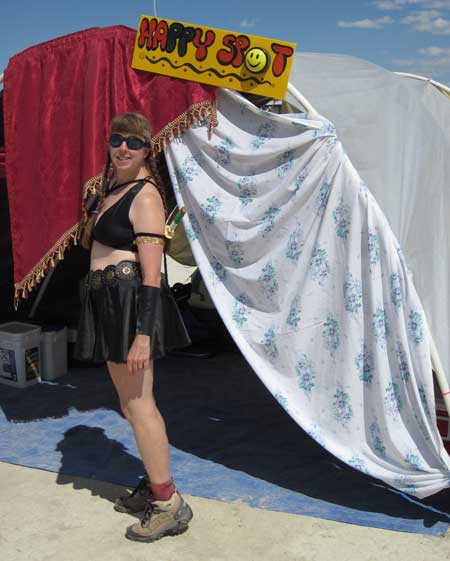 Meps dressed as Xena at the Happy Spot

The next day, I took one of the smaller signs and set it in the ground in front of the hut. I stuck a garish pink daisy on the sign and affixed an arrow pointing at the ground. Barry used some pink rope and landscape staples to outline a little box on the ground, the same size as the chalk one that had inspired me.

The box was perfect for one person and just big enough for two people if they were hugging each other.

We tried it out. Mmmmm, it was happy.

Our first “customers” were neighbors and friends. Our friend Yani came by and got her picture taken in the spot, showing off the her funny little thumb puppet, whose name is WhoopAss.

On the second day, a woman in furry aqua boots and a matching bikini top was riding by on a bicycle. She screeched to a halt and jumped off her bike and onto the square, saying “Oh! What a Happy Spot!” Before she pedaled away, we gave her a hug and a happy sticker for her bike. The magic was working.

Yani and WhoopAss in the Happy Spot 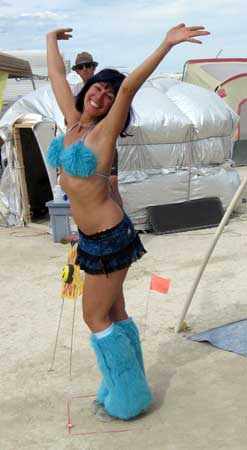 The aqua girl in the Happy Spot 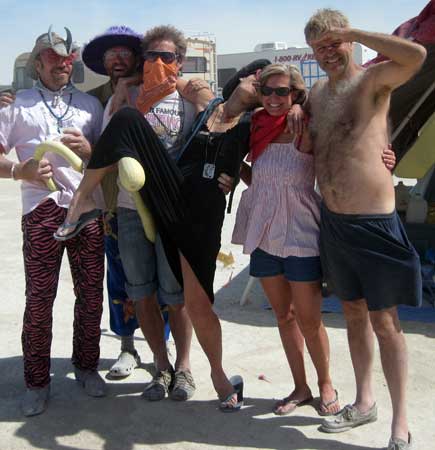 The gourd people, with Barry and Denise and John, in the Spot

Most of the people who stopped were on foot, because it was easy to meander over to our side of the street. But many stopped on bikes, and some firemen even stopped their truck in the middle of the road, got out, and stood in the Happy Spot. They gave us little plastic junior fireman figures to play with. 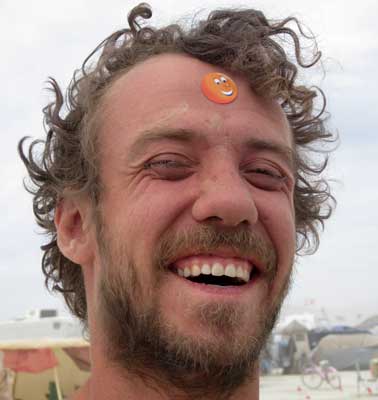 Man with happy orange sticker on his forehead

Everyone who stopped got a happy sticker. Unlike most stickers given out at Burning Man, these little stickers were all on one sheet, so they had to be affixed immediately. “Which sticker would you like and where would you like it stuck?” I’d ask. It was fun to watch them decide. All the stickers were different colors and had different happy expressions. Some people chose to put them on their bikes or water bottles. Others asked to have the sticker on their forehead or chest. A couple of people had little notebooks to put them in. Everybody got a hug with their sticker.

As the creator of the Happy Spot, I actually missed its most intense moment. Barry and Yani were hanging out in the shade when a man walking down the street stopped and stood in the Spot. “I need to go get my girlfriend and show her the Happy Spot.” They chatted briefly, and then the man looked up and said, “Oh, here she comes, right now.”

He called her over to stand with him in the Happy Spot. Then something very special and powerful happened, with a lot of tears and kisses. It was such a lengthy private emotional moment that Yani decided to make herself scarce, quietly saying goodbye to Barry and riding off on her bike. Barry, who had been sitting right next to the Spot, got up and puttered around the back of the campsite, trying to be unobtrusive.

The next morning, the two of them came back, hand in hand and smiling. Something big in their relationship had been healed in the Happy Spot. 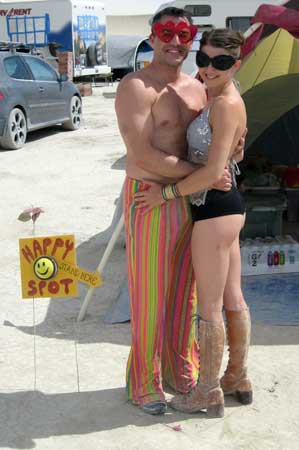 The happiest couple in the Happy Spot

Even with the Happy Spot at my camp, though, I wasn’t done dispensing joy to my fellow citizens of Black Rock City. On Friday, I put on a floor-length blue skirt, a huge satin confection with a glittery, gauzy overskirt. With it went a matching top, wings, and a wand. As the Fairy Godmother, I was going out to grant wishes.

I walked into Center Camp, which was, as usual, chaotic. A cute young guy caught my eye and smiled. “Would you like a wish?” I asked. “Sure!” he said. I realized I hadn’t actually figured out how the Fairy Godmother should grant wishes, so I had to make it up on the spot. I told him to close his eyes and make a wish. “You don’t have to say it aloud, just think it.” With my wand, I tapped him lightly on the right shoulder, the left shoulder, and the right again. “Bink, bink, bink.” I gave him a kiss on the cheek, and I said, “There! It may not come true right away, but it will come true — in your cosmic lifetime.” He grinned up at me. “It just did,” he said. His friends all laughed and asked for wishes, too.

I continued around the circle, offering wishes to people of all ages, shapes, sizes, and colors. From a bench across the way came a shout, “Shelly!” I looked over, and an animated young guy was telling his friends, “I saw her last year. She had the most amazing costume, made out of giant seashells.” I couldn’t believe it. I’d worn the “‘shelly” costume a couple of days earlier, but it hadn’t generated a lot of comment this year, and I thought maybe it was time to retire it. Yet here I was, dressed as the Fairy Godmother, and this guy remembered me, and the costume, from the previous year. Bink, bink, bink, went the wand, and then I granted wishes to all his friends, too. 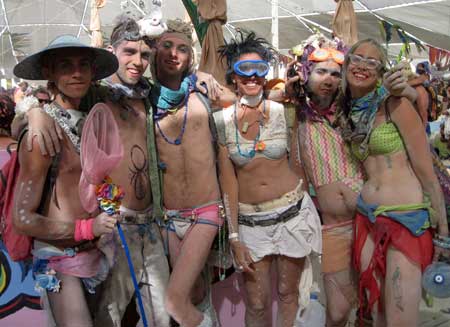 Six people, six wishes (they were using the butterfly net to collect dust) 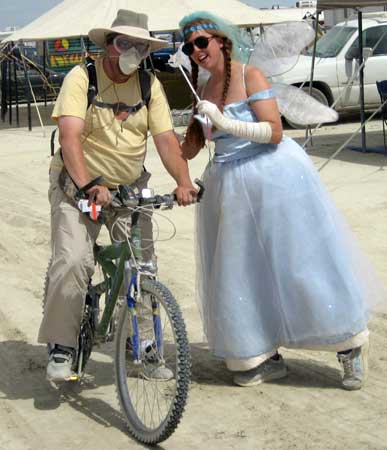 Granting a wish for happy feet to our good friend Mike

Hearing what the wishes were would have been interesting, but that would have diminished the gift. I didn’t want to exchange a wish for a piece of interesting information. I just wanted to give the gift of a wish.

I did accidentally hear what a couple of the wishes were, though.

A man sitting by the street, offering beverages to passers-by, wanted a wish. I asked if Barry could take a picture as I granted it. “Sure,” he said, “Can you take a picture with my camera, too?” “I’ll grant you two wishes, then.” “Does that mean I’ll get two wives?” he asked. 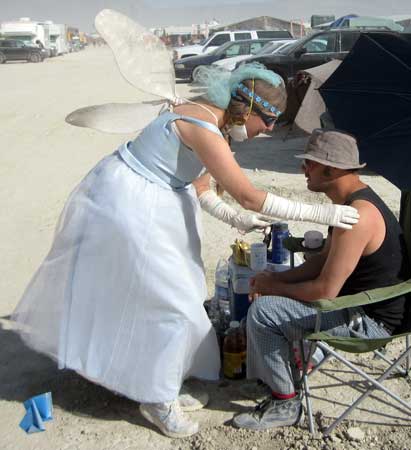 Two wives? Hopefully not at the same time!

I offered wishes to two little boys who were with their father. “Are you sure we don’t have to tell you our wish?” they asked. With parental wisdom, their father said, “You can whisper it in my ear.” He leaned down, and the younger boy whispered in his ear. Then I granted his wish. Bink, bink, bink. The older one, probably about 10 or so, did the same. The younger one looked up at his brother. “What did you wish for?” Big brother leaned down and whispered something in his ear. “Oh!” said little brother, loudly. “You wished that Jeremy would stop being a jerk, too?”

When I offered a wish to their father, he declined. Gesturing at the two boys, he said, “I’ve already got mine.”

For me, the Happy Spot and Fairy Godmother were what Burning Man was all about. Connecting with people, and giving them a once-in-a-lifetime gift that wasn’t about “stuff.” In a gift economy, I’d found the most valuable thing I could give away — the gift of joy. Yet the more I gave away, the more I had. 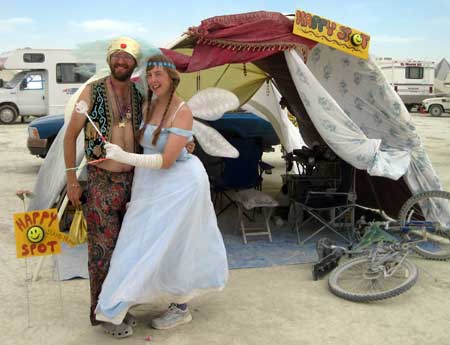 Meps and the one who makes her happy

2 thoughts on “Over joyed”