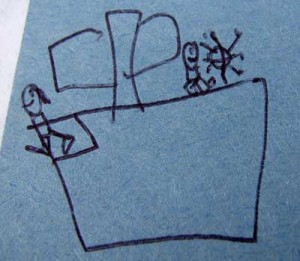 Emanuel's interpretation of a sailboat 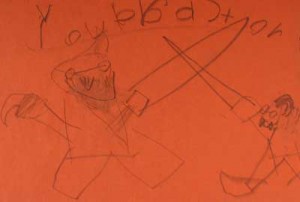 On a May day between my birthday and Barry’s, we were sitting out in the cockpit, enjoying the shade of our beautiful bimini top and eating a mid-morning snack. As usual, the cockpit was a mess, full of tools and parts, which included a pile of teak scraps on top of the refrigerator. They’d been removed from someone else’s boat, so they all had bolt-holes through them, but the bolts had been taken out.

A little wasp, black with white stripes, flew over and landed on the pile. She looked around, selected one of the holes, and climbed in. A moment later, she flew away.

To my credit, I didn’t scream or jump around or do any of the hysterical things I normally do around insects. I simply picked up the piece of teak and studied the two tiny green caterpillars she’d left, now exposed on top of the fridge. “Nice of her to bring us a little gift, but I don’t think we need these,” I said, flicking them onto the ground and cleaning up the pile of wood. When she came back, she walked around for a while, confused, then left us another couple of caterpillars before leaving for good.

The next gift to arrive was even more remarkable and a lot more tasty.

At his gym in Vero Beach, Florida, my Dad met a retiree named Carlo. The conversation turned to Carlo’s passion, making sausage. “What? You haven’t tried my sausage? I’ll bring you some!” After his retirement, Carlo was at loose ends, so his kids and grandkids talked him into making sausage, something he’d done as a child with his Sicilian grandfather. It was so successful that it turned into a business. Now he makes and sells Carlo’s Lean Sicilian Sausage at the local Saturday market, and he also packs it in dry ice and ships it all over the country.

When the package arrived, the first thing we got excited about was the dry ice! We put chunks of it in water and giggled at the bubbles and the smoking effect, and Barry even put it in a drink. Then we fired up the  barbecue. 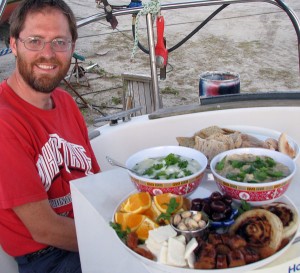 This stuff is magic! It’s full of flavor, but so finely ground that it melts in your mouth without the greasy feeling you usually get from sausage. I said it was the best sausage I’ve eaten. Barry said, “Yummy!”

And it was a lot tastier than the caterpillars would have been.

The next day, when Barry woke up on his birthday, he had a whole pile of presents. Being the hard worker he is, he spent the entire day doing electrical work on the boat, and he didn’t open any of them until evening, when Val and John came by for a piece of birthday pie. When he came up the ladder, Val had a big box under his arm and a shit-eating grin.

There’s a little back story to this one. Whenever a bunch of boaters get together, certain exciting topics  always come up in conversation. These include: 1. Cheap places to cruise, 2. Expensive places to cruise, 3. Marine toilets (this always seems to come up during dinner), and 4. Bedding compounds.

Val is a  proponent of 3M 5200, a polyurethane caulk with extremely strong adhesive properties. Barry and I prefer 3M 101, which is a low-adhesion polysulfide caulk, or butyl rubber, which comes on a roll and is also low-adhesion. After a glass of wine aboard Kuhelli one evening, the two of them got into an argument about it, and the fur really flew! Everyone was looking at Val and Barry, wondering if they were going to see a fistfight over bedding compounds.

That night, when Barry and I got home, I commented on the argument. He laughed, and said, “I’m sure Val knows that arguing with an engineer is like wrestling with a pig. Everybody gets dirty, but the pig likes it.”

So when Barry opened his birthday gift from Val, he found a cylindrical object with the following instructions:

FLUTTERBY EMERGENCY KIT
Open in case of a leak from other sealant that gave up. This will happen sooner than you think!!!!
WARNING!!!
This is powerful stuff. Make sure when you use it you line up the pieces correctly, because after it cures, there is no known way to remove it. Why would you remove it if the pieces are perfectly lined up? Not because of a leak. That I am sure.

We were practically rolling in laughter when Barry pulled out the tube of 5200, which had been further labeled “EMERGENCY USE ONLY ON FLUTTERBY.” 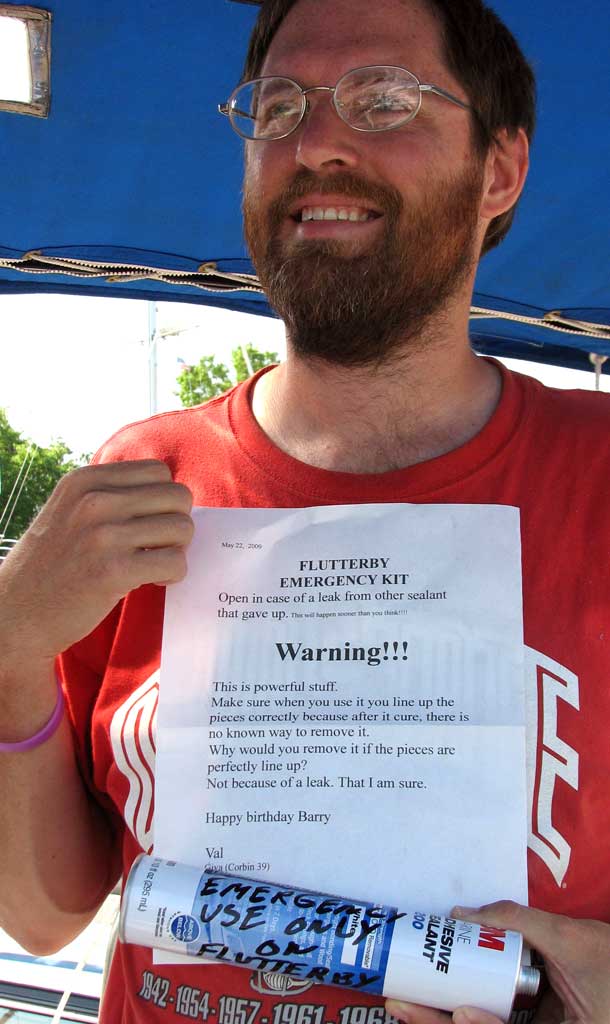 It just didn’t seem like there was any way to top such a perfect birthday gift. But wait, there’s more!

A week before Barry’s birthday, we’d gone to the Beaufort Music Festival and gotten hooked on a new band, an alternative group called Bombadil. Our favorite song is called Jelly Bean Wine, which we’ve been playing over and over (you can hear it on their MySpace page, about the 5th song down). Since I have an interest in wine-label design, I decided to create some Jelly Bean Wine for Barry’s birthday. I picked up a bottle of Arbor Mist, which tastes like this generation’s version of Tickle Pink (don’t ask how I know). They take cheap wine, add corn syrup and kool-aid flavoring, and sell it like real wine with a screw cap. It’s the only wine you can buy in the gas station (don’t ask how I know).

My label involved a photo of jelly beans that I ran through the “spin” filter in Photoshop. Under the photo was the line from the song: “Perfect for a Sunday morning hangover.” 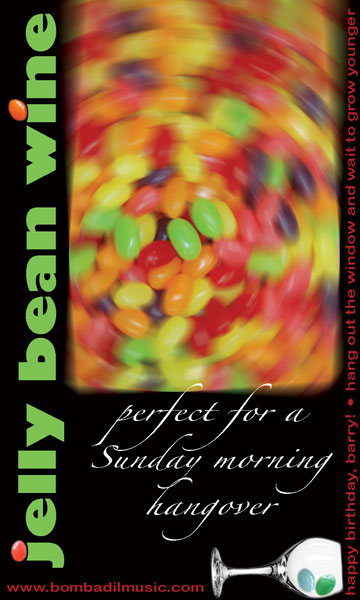 Meps' original label for Jelly Bean Wine. Our friend Tom says the label makes him dizzy, so I accomplished exactly what I set out to design!

It’s great as a piece of art. I’m not sure what would induce him to drink it. If he ever does, I’ll let you know.

Most people don’t get a that many birthday presents, let alone such creative and thoughtful ones. But all of these presents paled in comparison to the large, flat, mysterious box that came from Columbus, Ohio. We’d been waiting for Barry’s birthday to open it, but his sister told us, “It’s to both of you! Go ahead and open it.”

Inside, we found a Monopoly game. We looked at each other, puzzled. We knew that the Millers, parents and kids, love to play Monopoly, but how did they know we didn’t have the game? And where would we put it?

Then Barry lifted the lid and took out the board and exclaimed something like “Holy buckets!” (Notice that I said *like* “Holy buckets!” because Barry doesn’t actually say “Holy buckets!” it’s just more interesting that “Omigod!” which is probably what he did say. Or maybe he said, “Wow!” and I said, “Omigod, holy buckets!”) 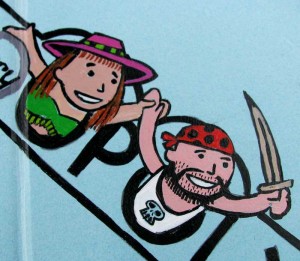 The center of the Meps-n-Barryopoly board

We bent our heads over the most amazing game board we’d ever seen. In the center were caricatures of the two of us, dressed as pirates, superimposed on the name of the game, Meps-n-Barryopoly. Each location on the board is a place we have been to and written about — Arkansas, Crater Lake, North Carolina, Portugal, Brazil, the Bahamas. Instead of going to “jail,” our set says “go to house,” and the two most valuable properties, instead of Boardwalk and Park Place, are Seattle and Burning Man, our favorite places in the world. The game pieces are sculptures of us and our teddy bears, and the cards are completely re-written to reflect our travel adventures. Even the play money is replaced with Bear Bucks, complete with Frankie the Bear’s head on them.

It was the most marvelous thing I had ever seen.

A day later, when we went to play it, though, we discovered one thing absent from the box: The rules. With our friend Dick, we wracked our brains to remember how to play, and finally reverted to the phone. We admitted to Julie that we loved our present, but didn’t know what to do with it! So she put Barry’s nephew Emanuel on the phone, and he gave us detailed instructions as only an 8-year-old can.

It was a marathon game, lasting until almost 3 am, when we all collapsed from exhaustion. Evidently, there are different ways to play Monopoly, and some take longer than others. If you play by the official rules, the game is only supposed to last about 90 minutes!

One day, we’ll get this boat out cruising, and we’ll stop at Vero Beach to meet Carlo, thank my Dad, and play Meps-n-Barryopoly while we drink a toast with Jelly Bean Wine and watch our 5200 cure. But first, maybe another little road trip? We need to go up to Ohio and thank Julie and Cody and Emanuel and Gabriel personally!

(Pictures of the Monopoly set are below. I made ’em big, so you can read the hilarious cards!) 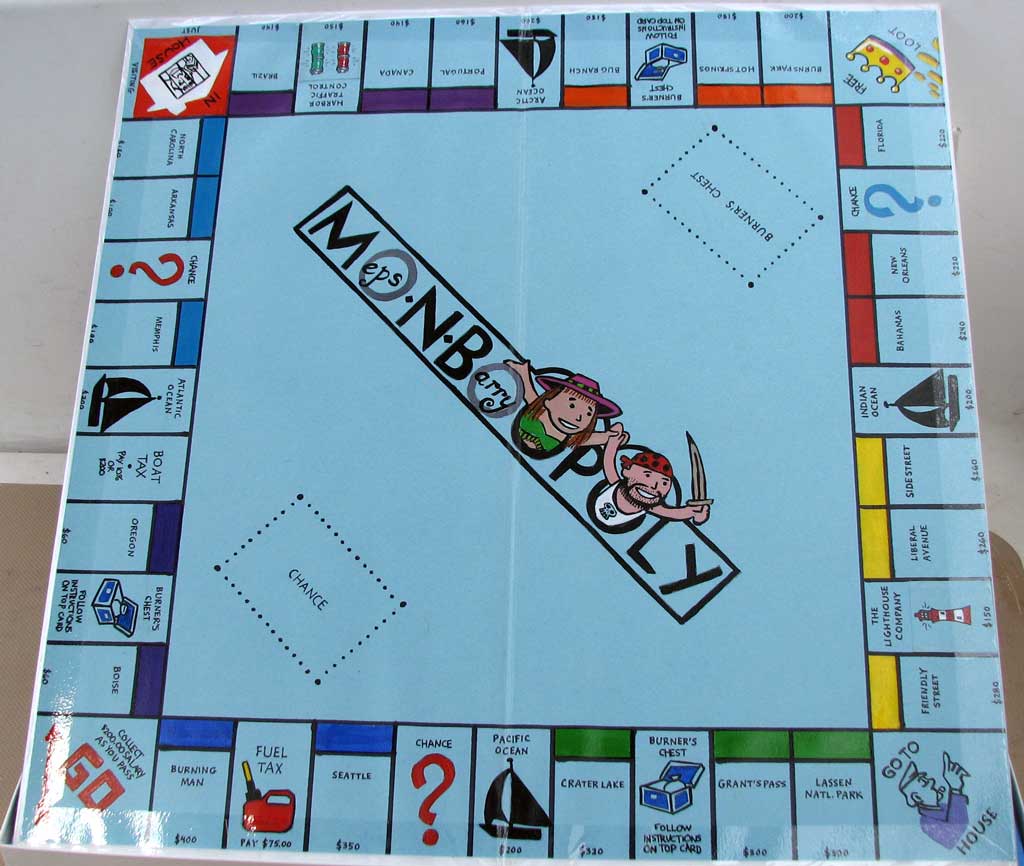 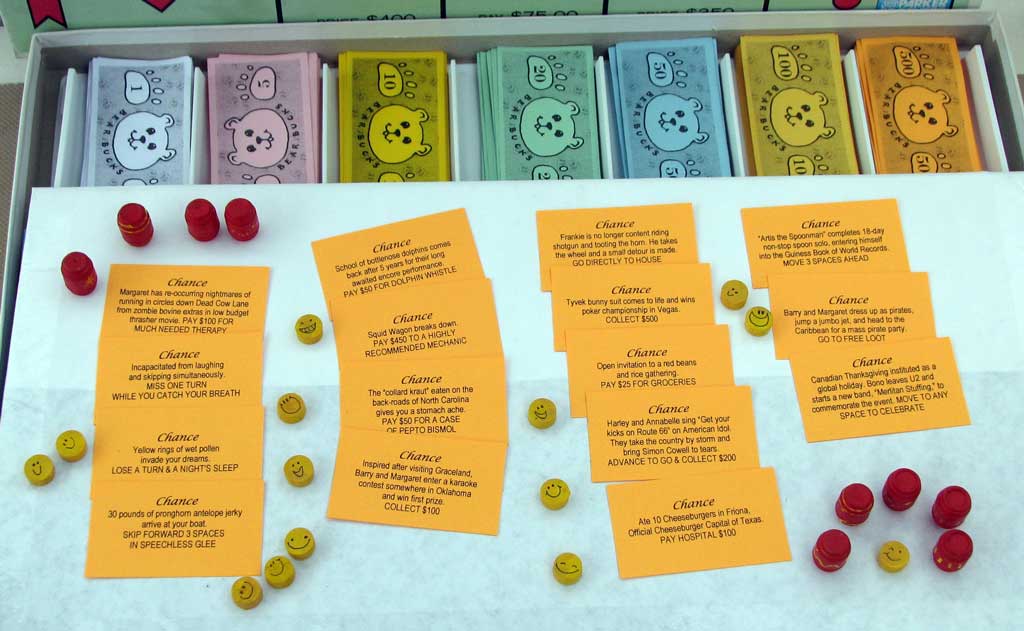 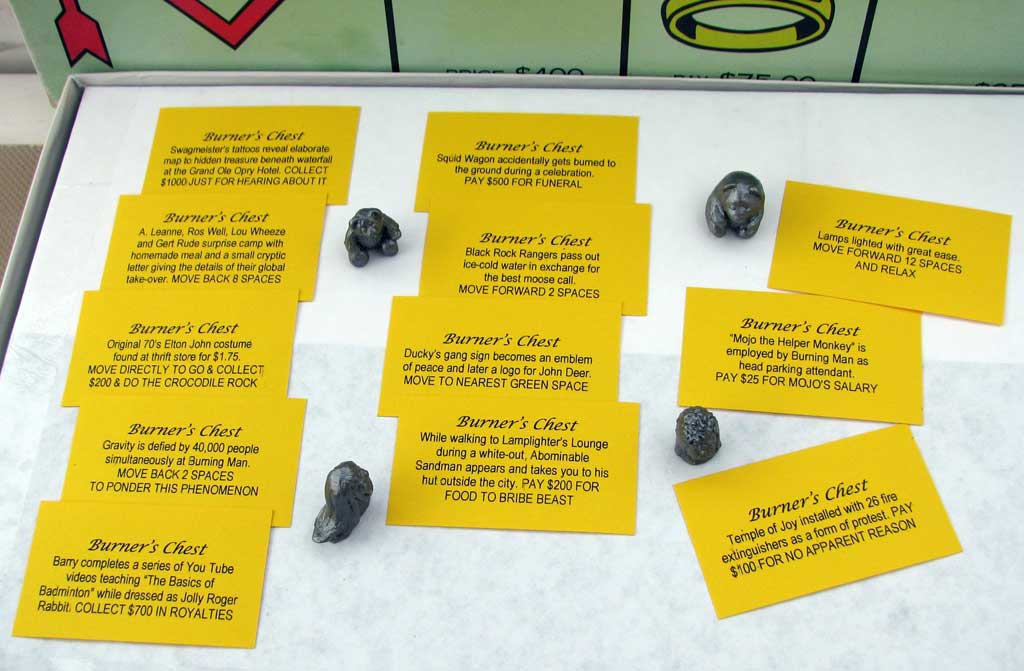 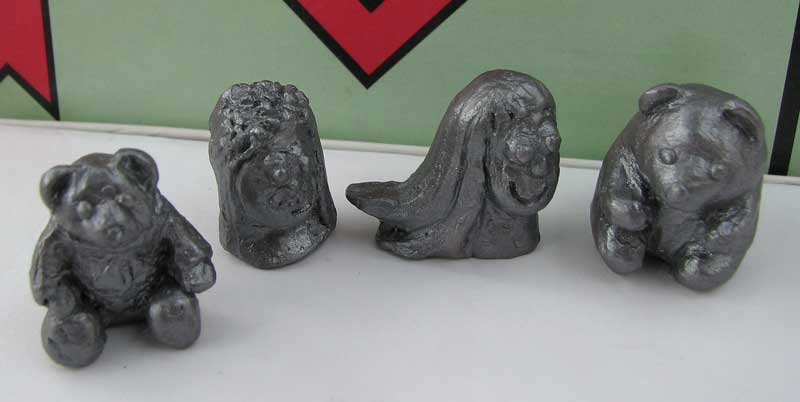 The game pieces - Scuppers in his sweater, Barry with a mohawk, long-haired Meps, and chubby Frankie 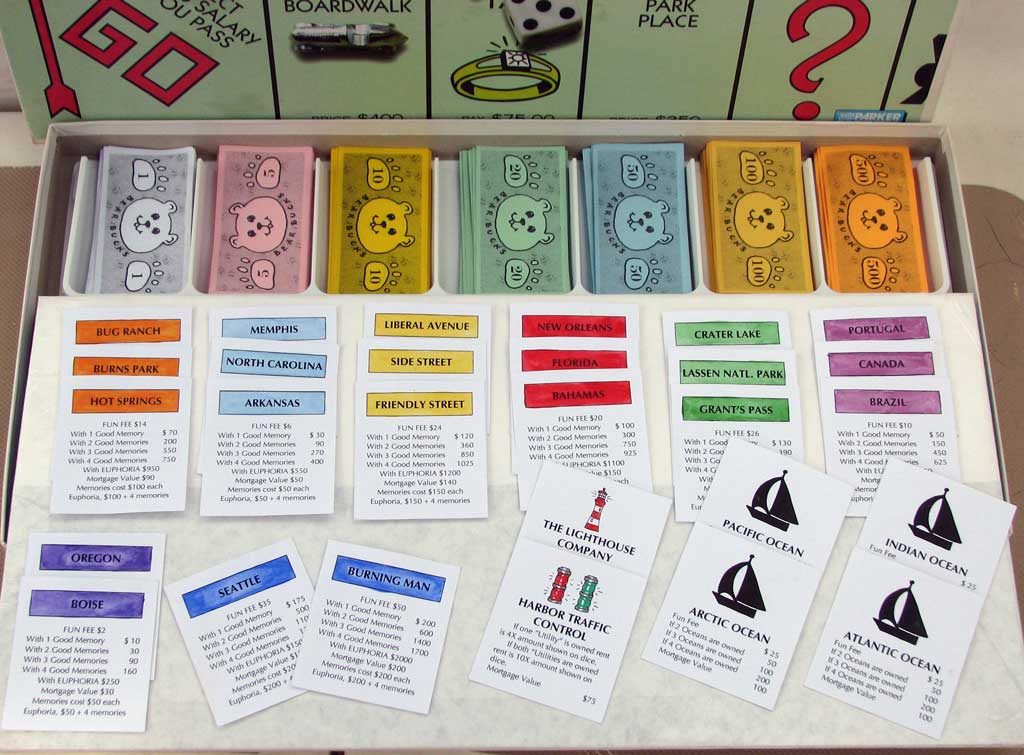 The money and hand-colored cards -- all of them places where we've been (except for a few oceans). The $50 fun fee for Burning Man is a little low, but $2000 for euphoria seems about right.