A recent email from Gary, cruising in Ecuador, said, “Write some more about your boat projects.” I stared at the email in astonishment. Was he serious? Or was he being, as they say, snarky? 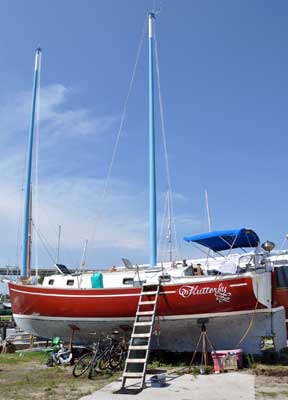 Now, since Gary asked for more about our boat projects, I will bare my soul and tell you about mast refinishing. Be forewarned, though, you are getting the Meps perspective, which will probably be full of small factual errors that won’t matter as long as the story is entertaining.

When we bought the boat, it had these infamous circumferential cracks in the masts. We determined that they were not structural, so we wrote a big fat check and took possession of the boat. Surely, a couple of smart people like ourselves could figure out how to deal with a little cosmetic cracking.

Once we started doing fiberglass work elsewhere on the boat, my mast-refinishing confidence sank lower. I was intimidated by the thought of making two 40-foot cylinders perfectly smooth. The finish had cracked because they were wrapped like a candy cane, and there were cracks between the fibers. Even if we sanded that cosmetic layer off and re-wrapped them with bi-axial strips, how would we smooth the joints between each wrap? We would be sanding for the rest of our lives, or else we’d have a lumpy, bumpy mess.

We wracked our brains for a solution for over a year. Nobody in the boatyard or on the internet seemed to have a better idea.

One day, after another brainstorming session, Barry went off to ask our local expert, Alex, what type of fiberglass tape we should wrap it with. Meanwhile, I turned to the computer and tried something crazy.

I asked Google how to “refinish a carbon fiber sailboat mast.”

I never expected the answer to be there. It wasn’t, precisely. What was there was this: “build a carbon fiber sailboat mast.” Suddenly, the phrase “fiberglass sock” leaped off the page at me. I ran more searches. To my delight, I discovered a whole new industry — composite sleeve material! You could order carbon fiber, kevlar, and fiberglass in a whole variety of colors and weights and diameters. They use this stuff for fishing poles, windsurfers, and my favorite application, model rockets.

I jumped on my bike and pedaled triumphantly after Barry. When I found him and Alex, I was out of breath with excitement. “I found the solution! I found it! We need a giant fiberglass condom, and I know where to order one!”

I was practically jumping up and down, but they just stared at me. Alex sort of shrugged (politely) and looked at Barry. Barry looked at Alex, then at me, and later said I was acting too crazy to be taken seriously. At the time.

I dragged him back to my computer and showed him the websites. Now that I had calmed down, Barry loved my simple, elegant solution. After we sanded off the old finish, we’d pull a 40-foot stocking over each mast and paint it with epoxy. Then we would fair it, paint it, and be done. 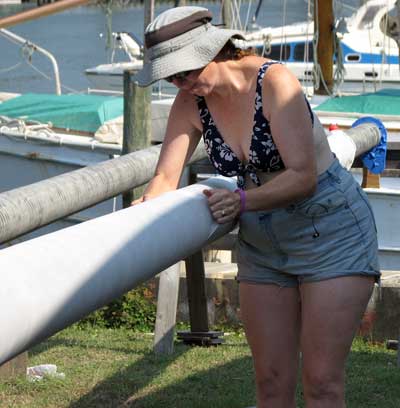 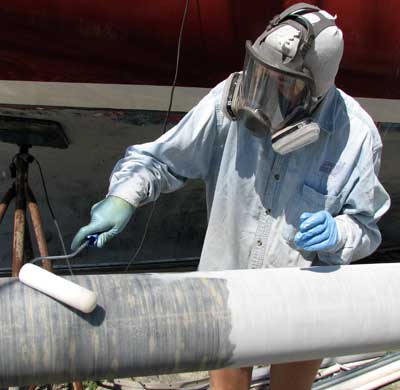 The sanding and prep work was exhausting, done in the full heat of the summer under some borrowed shadecloth. Then we pulled on the stretchy tube material, an inexpensive product called the Easy-Glas Sock, from Giant Leap Rocketry. It’s been seven years since I’ve worn pantyhose to work; I’ve forgotten how to put them on. And I’ve never put them on 40-foot legs before! But it went as smoothly as could be expected, and when we left for the summer, the masts were refinished and primed.

Just before Thanksgiving, it was time for the final paint. Getting a perfect shiny finish on a 40-foot long pole is something that takes practice. We decided to hire Alex to spray the final finish on.

The challenge now was color. As long as the gray primer was on the masts, I was embarrassed to see them beside the red hull. Yes, I went to Ohio State, and yes, the school colors are scarlet and gray. That’s not something I care to announce to the world. (whoops, I just did)

I mocked up photographs in a variety of colors. The original black was ugly. White would be boring. Finally, I was inspired by a photo I took in 2004 of a Newfoundland fishing craft. 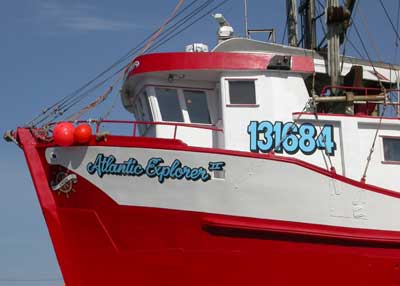 Standing next to the gray, primed masts, Alex asked, “What color do y’all want?” I took a deep breath and looked at Barry. We’d made the decision, but hadn’t told anyone yet. “Sky Blue,” I said.

Now, there are some people in this world who are bold and confident and not afraid of bright colors. When we chose sky blue (locally known as “Carolina blue”) to go atop our red hull and white deck, we bravely announced that we are two of them.

But in the dark hours of the night, I worried, even after they were painted. Were we announcing our color-blindness to the world? Would I regret this bold decision for decades? Would our sky-blue masts disappear against the sky-blue sky? Light blue, baby blue — I never wear it because it looks terrible on me. What was I thinking?

There was a lot of excitement on the day the crane came, and Kenny and Dale helped us put the masts back into the boat. There’s a lot more technical stuff about the mast heads and mast feet and mast steps, and how it all goes together in an unstayed Freedom, and I could tell you all that, but I won’t. (I can hear your sigh of relief all the way over here.)

The most important thing for me is that the masts look FANTASTIC. The finish is perfect and smooth, and it goes well with the red hull and white deck. I even painted a white band near the top of each one, like an old-style schooner. In a sea of aluminum masts, they are distinctive and eye-catching.

The masts are not the only distinctive addition — I’ve hand-painted the name on both sides. There’s also going to be a Flutterby logo, in black, white, and sky blue, on both sides of the hull and on the transom. It’s an amorphous scrollwork design, reminiscent of a butterfly. 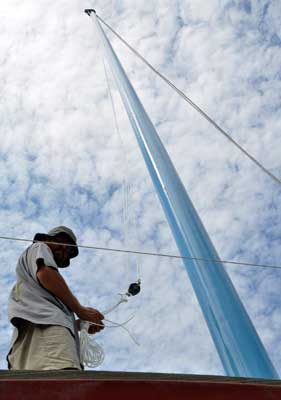 Finally, Flutterby is taking on a colorful personality that’s as quirky as her owners’. With her bright colors, her unusual rig, and her unique graphics, she’ll be memorable. I hope I can live up to that.