We went into that boating store, “West,”
For a brand new flag halyard, the best.
We replaced it — OK!
But the very same day
‘Twas the main halyard broke: Who’d have guessed?

“I’m so glad it’s your problem, not mine,”
Said our Freedom friends, sipping their wine.
But those friends don’t know Lee,
Who, with Simplicity,
Kindly fixed it — we sailed back, just fine.

He went up using spitwads and tape,
But no halyard! We watched, mouths agape.
It’s a bird! It’s a plane!
Superman’s on our main!
No, it’s Spiderman! See? There’s no cape.

A little note of explanation for our non-boating friends…the flag halyard is a loooong piece of string that you use to hang pennants from the mast. On our way to the Freedom Rendezvous with our friend Jacqui’s Freedom 30, we replaced it ($20), because it looked old and rotten. Twenty minutes later, the main halyard, which is the big beefy one used to hoist the mainsail ($200), broke instead. Since there was no backup or safety line, we had to deliver the news to Jacqui that a crane would be needed to re-reeve her halyard ($150/hour). Then Lee and Kathleen magically appeared in the harbor aboard their C&C, Simplicity. Not only did Lee free-climb the 44-foot mast at anchor, he also cooked omelettes for us for breakfast.

Images below: Meps, motoring north, has plenty of spare cycles to clown for the camera. Lee sets up his climbing gear for the ascent. Barry watches Lee from below (hope he doesn’t drop anything!). The masts of Piper and Simplicity at anchor in Port Ludlow, with Lee at the top. Success! Barry shows the bicycle chain weight that Lee fed down from the top of the mast. Out sailing again, with Barry grinding the winch. Crewmember Will takes the helm of the 30-foot sailboat. 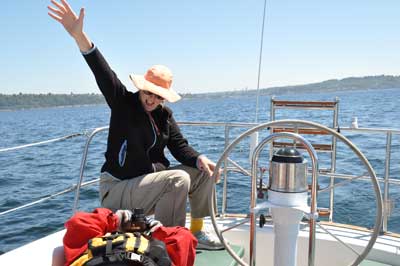 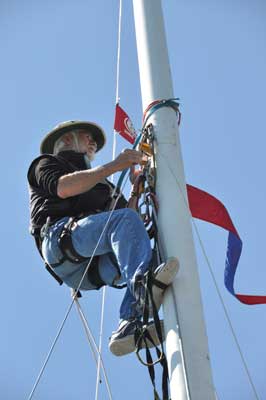 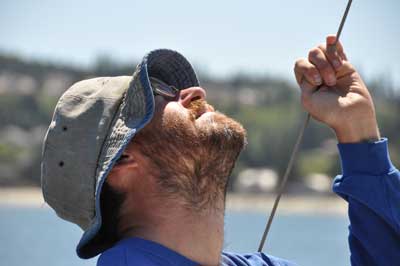 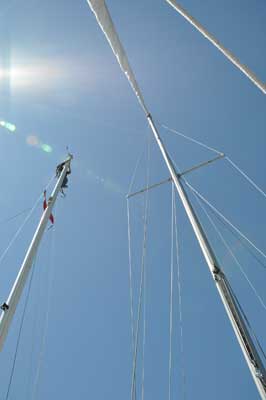 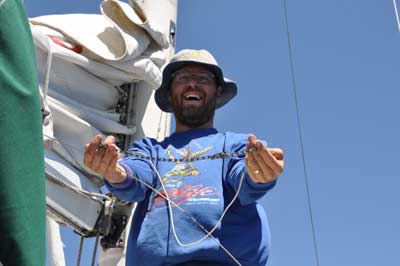 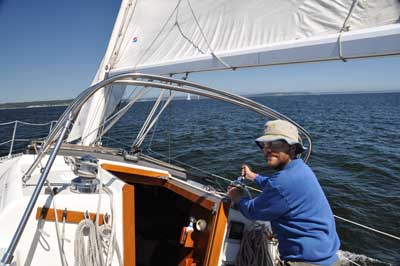 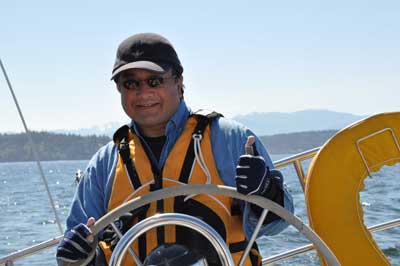