The biggest hazard to my style of travel is inertia. When I’m going, it’s hard to stop and interact with people and places. When I’m stopped, it’s hard to get going again.

It’s also hard to know which way to go when I start again.

In Columbus, after my backwards-loop with Hank, I was hanging out at his little apartment, spending time with old friends, and having a great time. Finally, I had to just yank myself out of there. “Where are you going?” asked Hank, that Tuesday morning. “Over to Dave’s. After that, I don’t know,” I replied. “OK,” said Hank. “When are you going to call me?” “Next week.”

Dave and I drove his little sports car to the Chillicothe Indian Mounds in a light drizzle. We had the ancient mounds to ourselves, no other people walking around. But we weren’t alone. There was someone — or something — else there. 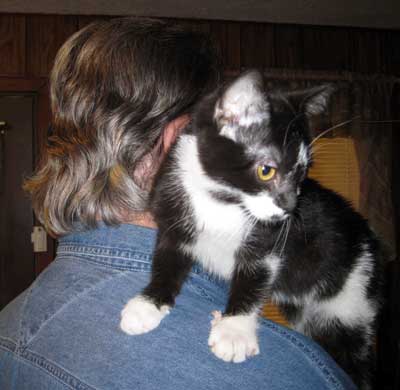 Dave with a shoulder cat 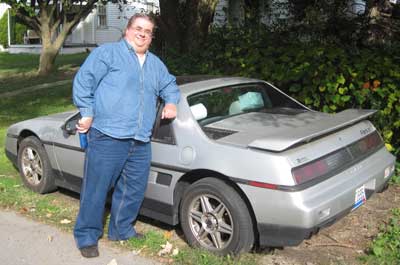 Dave and the fun little car we took to Chillicothe.

In the afternoon, back in Columbus, it was really time for me to leave. “Where are you going?” Dave and Maggie asked. “I don’t know,” I said. This time, I didn’t even know which way I would turn the wheel when I got into the car.

Dave looked very concerned as I got into my car to back out of his driveway. Then I realized it wasn’t my lack of destination, but the fact that I had a burnt-out headlight. I had a few hours of daylight to rectify that problem.

At the first stoplight, a car honked at me, because I didn’t get moving right away. I just didn’t know if I should go south, or east. My brother-in-law, Cody, told me he and a friend once went on a road trip where they flipped a coin at crossroads to determine their direction. Columbus traffic was too heavy for me to dig out a quarter and start flipping coins on the passenger seat.

I compromised and headed out of Columbus on US 33, into southeast Ohio’s hill (pronounced “heel”) country.

I’d spent nine days with Hank, and now this silence and freedom felt strange. It was like starting the trip over again.

In Logan, at dusk, I bought a headlight bulb. Feeling sorry for myself, I spent 15 minutes trying to get the old one out of the fixture. Then the clerks from the auto parts store took pity on me and got it out in 15 seconds. Just in time — it was dark, and I needed that headlight. I also needed a place to stay.

I had turned my nose up at the chain motels on the highway. Surely there was something better in town. I drove down the main street, but I didn’t see one. Should I go back to the highway? Whoops, missed the on-ramp! Time for a loop around the block — oh! I’m facing the Inn Towner Motel’s front door. Serendipity again.

It was in Logan that I got my traveling stride back again. The white-haired desk clerk entertained me with stories about life in Cuba during Castro’s takeover. In the morning, I laughed out loud when I ran through noisy piles of dry, crunchy fall leaves along the sidewalks. I joked with a policeman in the donut shop, where the donuts were handmade and not perfectly-shaped. He always bought a dozen for his buddies, but the guys at the station never saw more than eleven donuts. His special apple fritter never made it that far. 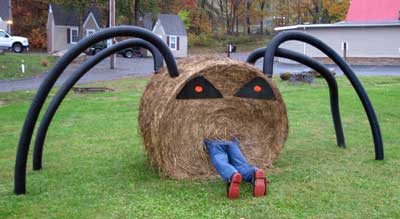 For some reason, I was being pulled east more than south. I picked a twisty 2-lane road that would take me toward the Ohio River and West Virginia. A couple of hours later, at a pit-toilet rest area, a cold fall rain started. Summer was over.

I was pushing too hard. I’d sent some emails the previous week, looking for a retreat house where I could spend some contemplative time. The places I’d written to were south, but only one had answered my inquiry. They had a room available, but not for weeks.

Trying to make things happen was like pushing a piece of string. I had to let go of that particular string and look for another one. One that would pull me, if I just grab onto it.

Shivering in the car, I thought of my friends, Donna and Mike, in Pennsylvania. For me, Mike was one of the best things about our 2008 trip to Burning Man. He was our next-door neighbor, and it was his first Burn. Watching him experiencing the art and the creativity and the magic was like being first-timers again ourselves.

In 2009, he brought his wife and son down to Beaufort for a visit, and Donna and I really hit it off. We were all sitting at dinner, talking about food, and they started telling me about Donna’s mother’s Pennsylvania Dutch Pot Pie. It’s a 2-day affair to make it, and they just about went into rapture describing it.

“Can I get a recipe?” I asked. Not really, they said. Donna’s Mom hadn’t ever written one down. “You just have to come up and learn it from her some weekend,” they told me.

Sitting in the car in that cold drizzly rest area, I called Mike. “Can I come learn how to make pot pie this weekend?” I asked. “Sure!” he said.

In my imagination, I pictured a warm, bright kitchen, big bowls and cutting boards and bubbling pots on the stove. I imagined feeling like part of a family, getting messy and sharing the work. Laughing together, eating together. Could it really be that good? Could there be pot pie nirvana in southeastern Pennsylvania?

I grabbed the string and let the universe pull me across rainy West Virginia and Maryland. I was going to find out. 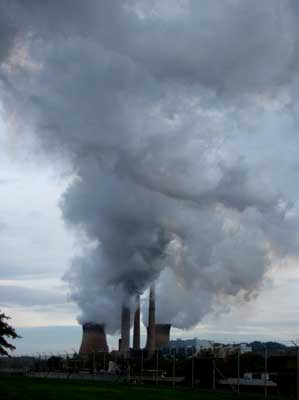 Power plant on the Ohio River 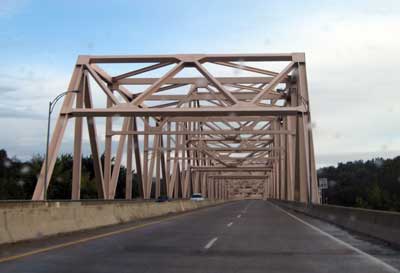 They even had dead scarecrows by the side of the road 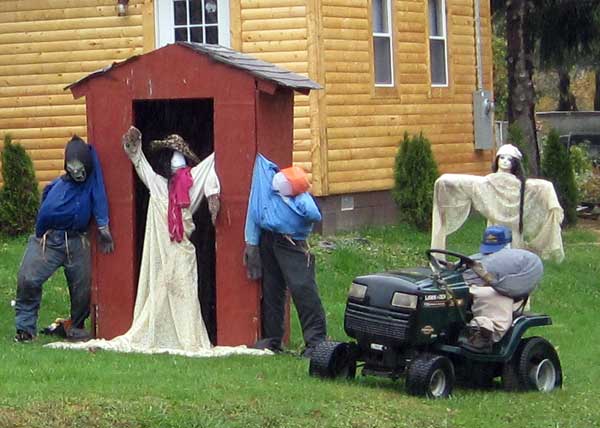 Some of the 28 scarecrows in one yard in West Virginia