Every year, there comes a time when Burning Man ends and we have to pack our dusty camping gear and clothing. It’s not like packing up just any campsite.

Barry's ready to take down the shade structure. We took this picture so he could remember his knots for next year.

First, we have to take down and fold a shade structure that measures about 500 square feet, coiling dozens of dust-laden ropes that held it up. As we untie the ropes, we have to yank out the pieces of rebar that they were tied to, preferably before we trip over one of them and get hurt. Since the rebar was driven into the ground with a sledgehammer, it takes a lot of work to get it out. We have to mop up any yucky water that didn’t evaporate in the shower pond, sort the recycling and garbage, and find a place to burn the burlap bag full of dessicated compost.

We have to do all this while wearing dust masks and work gloves in the blazing sun. Even so, it’s not the most painful part of leaving — saying goodbye to all our friends is. There’s never enough time in one week to spend with all our dear friends in Black Rock City.

But this year was different. It has been almost a month since we left, and I am still floating on Cloud Nine, feeling bubbly and happy. Why?

It’s because I didn’t have to say goodbye to my friends right away. Yay! 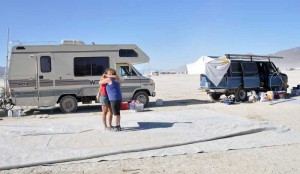 Anneliese and Sparkle sharing a hug in front of the RV

We camped this year next to a great couple named Shade and Swirly Sue. The two of them had a small RV and an enormous, welcoming shade structure. They were fun and generous, offering cool foot baths to anyone who wanted one. Because of this, they made lots of new friends. By the end of the week, there were six people camping next to us instead of two.

All six left Black Rock City together, riding in Shade and Sue’s RV and towing their gear and bikes in a large open trailer.

A couple of hours after we drove out of Black Rock City, we walked into a furniture-free rental house in Sparks, Nevada. “Guess who had a flat tire?” I called out to the assembled group, which included all nine of the fine Burners mentioned in the above paragraph. They were sprawled on the carpet in the living and dining rooms, eating cold, fresh food like lettuce salad and ice cream. All were enjoying life without dust for the first time in a week. As the evening wore on, each dusty person would disappear for a while and then return from the shower, unrecognizable.

The impromptu house party was hosted by Sparkle, who’d just attended her first Burn and had taken to it like a fish to water. Looking around the room, I remembered her asking me about the principle of Gifting. “What should I bring to give away?” she asked me, referring to items she could buy in advance. I suggested she not bring anything for her first year, just enjoy the experience and know what to bring the next time.

Now, after one week in the desert, she was demonstrating that she understood the principle of Gifting perfectly. In fact, she also was helping us experience Radical Inclusion, Participation, Immediacy, and Communal Effort, more of the Ten Principles of Burning Man.

After showers and a meal, two of our friends had to leave that first night, driving through the night to the Bay Area. They got a lot of hugs to help them on their way. Four others took off the following day. But five of us stayed through the week, forming a sort of family group in the Sparkle House. 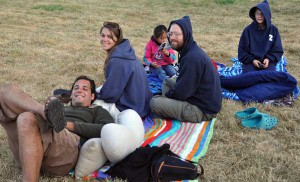 Our little family at the balloon races 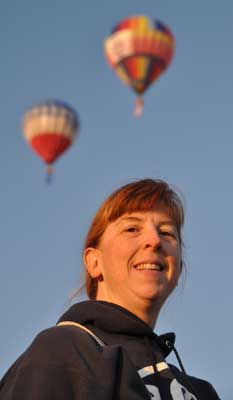 Yours Truly with a couple of thought balloons

One evening, we descended on a laundromat together and took over 13 washing machines. Then we ate pizza, played games, and drew crayon pictures for each other at the Blind Onion. Another day, we drove to Lake Tahoe, where all five of us had to share one camera. We lived even more of those Burning Man principles, namely Radical Self-Expression (we sat around making jewelry from glass and wire), Decommodification (no TV!), and Radical Self-Reliance (cleaning all the dust off our gear). The grand finale was the Great Reno Balloon Race, which we all attended at the end of the week. Words do not do it justice — more photos are coming.

It was a magical time, a chance to experience intentional community outside of Burning Man. We’d only met Nick and Anneliese a few days earlier, but they were so easy to be with, it was as though we’d known each other all our lives. My connection to Sparkle was even more amazing. We’d known each other at school 30 years earlier, but had been out of touch ever since. When she arrived at Burning Man, it was the first time I’d seen her since we received our high school diplomas. Now she’s like a sister.

Eventually, we did have to leave and say goodbye to Sparkle and the kids. That was a tough goodbye, but we did not have to say goodbye to Nick and Anneliese. They went along with us to our next adventure.

To this day, people are still asking us, “How was Burning Man?”

“It was great! The best ever!” Barry and I say, in unison.

And, I might add, it’s not over yet. As long as there are Burning friends in my life, it might just go on forever.

6 thoughts on “Keeping the flame alive”