In Flanders Fields the poppies blow
Between the crosses row on row,
That mark our place; and in the sky
The larks, still bravely singing, fly
Scarce heard amid the guns below.

We are the Dead. Short days ago
We lived, felt dawn, saw sunset glow,
Loved and were loved, and now we lie
In Flanders fields.

Having driven over 15,000 miles across the USA this year, we’ve seen hundreds of them. Crosses beside the road. Each one saying, “a life was lost here.” 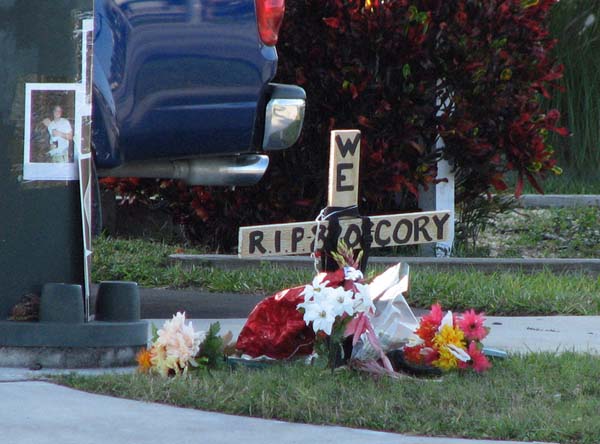 It’s a sobering reminder of the risk we take every time we get behind the wheel.

In some states, instead of homemade crosses, there are signs posted by the Department of Transportation. Wyoming takes down homemade memorials and replaces them with a sign showing a dove on a broken heart. Driving by at 55 mph, the Squid Wagon’s top speed, they look a lot like the logos on portable defibrillators.

The signs in South Dakota are easier to understand. They feature a red “X” to mark the spot, and the thought-provoking words, “Why die?” In some places, there are two, three, or four of these signs together. Four lives lost here.

Doing research for this essay, I found that there’s actually a name for them: Descansos. It’s the Spanish word for a place of rest, a memorial erected at the place where someone died.

Seeing one makes me think, “Am I driving carefully enough?” But in all my life, I’ve never come face-to-face with a traffic fatality.

We’d just driven 750 miles from North Carolina to Florida, and after arriving at Dad’s house, we needed to take a walk and stretch our legs. We decided to look up an old friend we hadn’t seen in over 10 years.

“Are you sure you don’t want to take my car?” Dad asked. No, we assured him, we wanted to walk.

It was an OK walk, except for the lack of sidewalks. I was especially nervous about bad Florida drivers, so I waded through the mud and high grass and trash by the side of the road, to give them plenty of room.

On our way home, Barry and I were walking along holding hands. Nervously, I kept pulling him further away from US 1, over into the puddles.

And then my day was shattered by a terrible sound behind us.

I turned, and as I took in the scene, I started running back towards the intersection. All I cared about was the large man who lay in the center lane. I was pulling out our cell phone as I ran, saying to Barry “He’s not moving – he’s not moving – please, let him be OK!”

I was running, but everything was in slow motion. I took in the motorcycle pieces scattered across the road and the large white van pulling over to the shoulder, but I couldn’t figure out how it happened.

A small group converged in the middle of the road. A woman got on the ground with the prone man. “He’s breathing,” she said, her face on the pavement beside his helmeted head. Cars were passing only a few feet from the two of them, and I began waving them out to the right-most lane. A few minutes later, a police car arrived, and Barry and I left. We hadn’t actually witnessed the accident, and we didn’t want to be in the way.

I was shaking as I walked. The man hadn’t spoken or moved a limb, but his midsection was twitching in a frightening way. Was he going to be OK?

That night, I couldn’t sleep. I kept reviewing the scene, trying to figure out how he’d been hit, and how he could survive his injuries. There had been no blood, only the ominous dark stains of oil and coolant and fuel under the pieces of his motorcycle.

The next morning, my Dad pointed out a small newspaper article. A 26-year-old man was airlifted to a hospital, where he died. I turned away, tears in my eyes.

His name was Cory. He was engaged to be married in a few months, and he left behind a 7-year-old son. He was a chef at the Moorings Yacht Club.

Cory was killed by a large van that made a left turn out of a parking lot onto the busy highway. The driver must have been in a hurry, or on the phone, because Cory was hard to miss. It was broad daylight, and he had a bright orange motorcycle. He was not a small man. He wore a full-face helmet that matched his bike, despite the fact that helmets are not required in Florida.

A day later, a cross appeared at the intersection. It said “RIP Cory,” and it was decorated with red foil heart-shaped balloons. Every time I passed it, my eyes were drawn to it. Once, as I sat at the stoplight, I watched a jogger pause and look at the photos of the deceased. I felt a lurch in my chest, thinking that Cory was still alive when I saw him.

My happy vacation was subdued, impacted by the senseless death of a stranger. It was a first for me, walking by the scene of a fatal accident, and I won’t ever see motorcycles the same way.

Please, drivers, slow down and be more careful. Whether it’s a motorcycle, a bicycle, a jogger, or another car, it’s a person. None of us wants to be obliterated, replaced by a cross by the side of the road. I don’t ever want to hear that terrible sound again, and I still cry for Cory, even though I never knew him.

5 thoughts on “In memory of Cory”