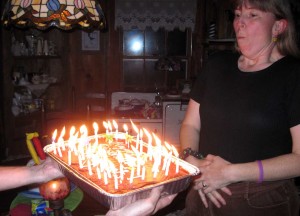 Writing a birthday limerick is simple and doesn’t take a lot of time. In this age of conspicuous consumption, a simple birthday limerick is a great way to celebrate someone special without bringing more styrofoam, wrapping paper, and unwanted aftershave into the world.

I have chanced on a great birthday present,
Not expensive champagne, duck, or pheasant,
But a lim’rick — some humor
To dispel the old rumor,
That a birthday is not something pleasant.

In order to make the limerick special, it needs to be about the person, not a generic 30th- or 40th-birthday limerick. For me, that requires a little brainstorming session. I do this best when insomnia strikes in the middle of the night. If the person’s birthday is imminent and you don’t have insomnia, a couple of beers can lubricate the rhyming process.

The brainstorming simply involves thinking about the person and anything related to him or her that’s easy to rhyme. Is the person’s name easy to rhyme? I have both a sister and a sister-in-law named Julie, and I haven’t been able to do much with “Bernoulli” or “patchoulli.” So I’ll have to use other techniques, as you’ll see below. However, some names are easy, such as “Kate” or “Barry.”

There once was a lady named Kate,
Whose birthday was on this fine date,
She wanted a cake,
But her friends could not bake,
So her candles just sat on a plate.

Now, there once was a pirate named Barry,
Who is frozen and quite stationary,
He’s unable to fight,
What is looming in sight,
Turning forty for him is reeeeeeal scary.

If the person’s name is not easy to rhyme, think about his or her relationship to you — what rhymes with “sister,” or “son?” When I needed to write a birthday limerick for my father, I found no good rhymes for “Henry,” but dozens for “Dad”:

There’s a guy who I proudly call Dad,
And a mighty fine birthday he had.
To make such a great man, it
Takes years on this planet.
But I won’t tell his age (he’d get mad).

Another good theme to get the rhyming started is the person’s age. Ages ending is “seven” are bad to rhyme, because you’re limited to “heaven” and “eleven.” But you can talk about the fact that he or she is no longer thirty-six, which rhymes with plenty of words — flicks, picks, tricks, mix.

Here’s one I wrote for a reader with two young children who wanted help with the invitation to their combined birthday party. The nice thing about this one is that it’s flexible, and you can change it to suit different children. You could replace the names, change the month, even replace “cookout” with “party,” and it would still work:

Our Seth is about to turn two,
And Rachel’s soon four, it is true,
We’ve written this rhyme,
‘Cause October’s the time,
For a big birthday cookout with you!

You can be even more creative, branching out and thinking about the subject’s home town, home state, occupation, or hobbies.

Here’s one about my brother-in-law, Ed, an ultra-marathon runner. Every year, on his birthday, he runs the same number of miles as his age:

The number of miles he would run
Last year was a mere fifty-one.
But now, fifty-two?
That much harder to do —
Old age does not make it more fun.

Current events or something funny that happened to the person can also inspire a good limerick. I once had a friend who moved from the bug-free Pacific Northwest to New Orleans. That year, he gave me plenty of subject matter:

While taking a drink in the shade,
Dear Brian enjoys Gatorade.
But taking a swig,
Found a live roach THIS BIG,
Now he’s mixing his cocktails with Raid.

Once I come up with an inspiring word or phrase for the person, I usually start going through the alphabet, looking for words that rhyme with it. There are also lots of good rhyming dictionaries on the internet, where you can type in a word, and all the rhymes come back. I use Rhymezone, which organizes the choices by syllables. If I’m having trouble coming up with good rhymes, I can also check Rhymezone for synonyms. That often breaks through the rhymer’s block.

There are a couple of tricks you can do to come up with even more rhymes for a given word. One is to contract the word:

On a trip south through old Oklahom’

And another is to add an extra syllable at the end of a word:

Two gals who were feeling quite plucky,
Drove north in their little red truckie

For your limerick, you’ll need at least two sets of rhymes — one with three words and one with two words. If you have more than that, you may be inspired to write several stanzas.

Now you’re ready to construct the birthday limerick. If you’ve written limericks before, or if you feel comfortable mimicking the ones you’ve read, go for it — but when you’re done, there is one crucial step you should not skip.

Write or print your limerick and hand it to someone else to read out loud. That will immediately identify any problems with the rhyme and meter. This is an important step for a birthday limerick, because birthday limericks are always read out loud, either at large parties or just repeated many, many times.

If you’re new to this limerick business, or you want to hone your skills further, keep reading for some tips on structure and meter.

One of the biggest challenges to limerick-writers, new and experienced, is getting the meter right. A proper limerick has anapest meter, which means lines one, two, and five are stressed like this:

And lines three and four are shorter, but still have the same kind of meter:

You can modify this a little, starting a line with da-DUM and ending it with da-da-DUM-da. But don’t make changes other than that, or it won’t flow properly, as this example attests:

No, it’s really not that hard to rhyme,
And it just takes a whole lot of time.
But the meter’s the thing
To make every piece sing,
And limerick-writers like me consider lousy meter a terrible crime.

The trick to making a good limerick great is to make it funny. Humor is the hallmark of a great birthday limerick, and you have a chance to gently poke fun at the birthday person. It’s always nice to throw in a little surprise in the last line, as I did in this 40th birthday limerick:

So by 40, your hair’s turning gray,
And gravity holds you in sway.
You must stand on your head
When you get out of bed,
Just to keep nasty wrinkles at bay.

But the truth is, you’re not really old!
You are vibrant and youthful and bold.
You can still climb a tree,
You’re vivacious and free —
Now just eat these stewed prunes, as you’re told.

Margret “Meps” Schulte has always had a soft spot for silly rhymes, her favorite poetry book being the Norton Anthology of Light Verse. In 2002, she was inspired to publish her first limerick on the Web when she noticed that her friend Brian’s name sort-of-rhymed with the name of his new boat, Cayenne. Since then, she has written well over 200 limericks about her travels, current events, friends, and anything else that strikes her fancy. Meps has also submitted about two dozen limericks to the Omnificent English Dictionary In Limerick Form, or OEDILF, giving her the dubious title of “Contributing Editor.”

2 thoughts on “How to write a birthday limerick”