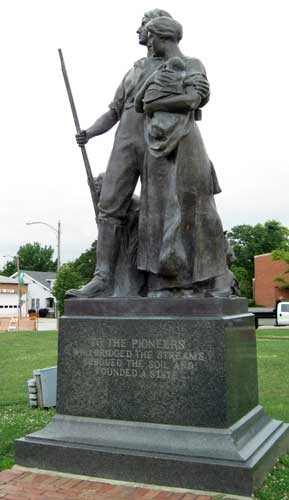 The inscription reads, 'To the pioneers who bridged the streams, subdued the soil, and started a state.'

In the small town park, there was a band shell and a statue. The latter towered formidably over our heads. It was a bronze casting of a couple holding a child and staring off into the distance. The inscription read, “To the pioneers who bridged the streams, subdued the soil, and founded a state.”

My eyes followed their gaze, and met terrible destruction.

On a whim, we’d hopped off Interstate 74, in Western Illinois, to follow a small brown highway sign that said, “Lorado Taft works of art.” The 16-mile detour would take us through nothing but cornfields. I worried that we might not even like the art.

Barry pointed out that we had postcards and a parcel to mail. Even if we hated Taft’s art, we could use Elmwood’s post office.

We drove for about 15 minutes, and just as we reached the edge of Elmwood, we came to a sign in the middle of the road: “Road Closed.” If we followed the detour, we’d miss the art altogether. 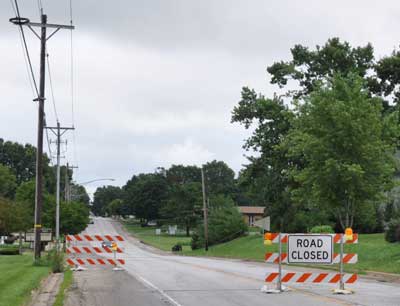 The road into Elmwood, Illinois

We sat at the crossroads, puzzled. “They can’t close the whole town!” I said to Barry, indignantly. A car came along and swung around the sign, ignoring the roadblock. We followed. A block down, there was a sign on the right, pointing towards the Taft Memorial. “Let’s find the post office first,” said Barry, who was driving.

A few blocks later, it became apparent that Main Street, which intersected our road, was full of construction equipment and jersey barriers. Barry turned right and paralleled it, two blocks away, but every time we came to a cross-street, there was a jersey barrier. He was so busy trying to figure out how to make a left turn, he didn’t see the clue on the other corner.

It was the remnants of a telephone pole, tilted at 45 degrees and splintered ten feet in the air. The pieces fell into place: Tornado.

And then Barry found a place to turn, and we crossed Main Street. The tornado had ripped and splintered its way precisely through the heart of the little town. For about four blocks, Main Street was rubble, construction equipment, yellow tape, and jersey barriers. 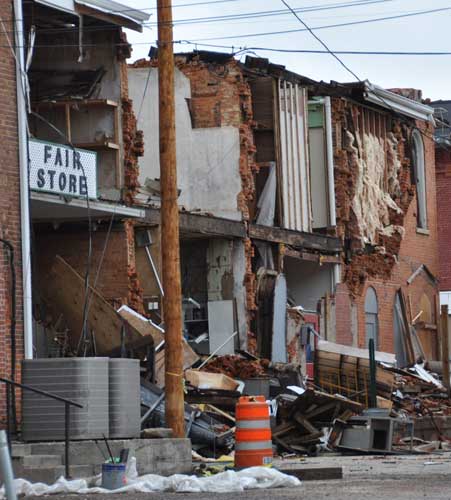 A block away from Main Street

Somewhat stunned, we got out of the van and walked over to the town park. I was incredibly curious, but embarrassed. I wanted to say, “I’m sorry. I didn’t come here to gawk at your misfortune. It was a coincidence.”

A cluster of older folks stood on the sidewalk, watching the demolition workers. I walked over to ask where the post office was, but just then, I saw it. It was in one of the damaged buildings, closed until further notice.

A woman pointed out the white and blue truck on the other side of the park. “That’s our post office, for now.” That’s when I saw the pioneer statue by Lorado Taft, honoring the fact that those who settled Elmwood had endured difficult times. I shook my head at the irony.

With our camera, Barry and I walked around the perimeter of the destruction, capturing images of the sudden power of nature. Two teenagers trotted past, carrying large crowbars. In another situation, that would be alarming. Here, it was charming. A man watching from his bicycle was enveloped by dust as a second-story wall came down. He pedaled to another spot and continued watching.

Eventually, we joined the group in front of the bank that had grown to about 20 people. One man had a home video camera on a tripod, and just about everyone had a little digital camera. “When are the kids coming for a visit?” one silver-haired woman asked another. “Next month, to celebrate the birthdays,” was the answer. “I can’t wait to show them these pictures. How’s your mother?”

We learned that the tornado had hit a month earlier, during the town’s annual Strawberry Festival. There had been ample warning, so everyone went home and no people were hurt.

I’m sure the early aftermath was traumatic — live powerlines and broken water mains and precarious walls of brick teetering above Main Street. That’s over now. The crews we watched were tearing down unstable structures and getting ready for rebuilding.

No one we talked to seemed sad or distressed; all the people chatting on the street corners were pretty cheerful. There was a buzz of excitement and lots of interaction. Hometown Hardware, located on the corner, had lost most of its second floor, but their signs were intact. There were several jokes about the large white one that said, proudly, “Help is on this corner.”

In a few months’ time, the Lorado Taft sculpture of the pioneers will look out over a new landscape. The buildings will be different, and the town will have new history. The stalwart descendants of these pioneers have figured out how to deal with the forces of nature and move on. Their ancestors, the pioneers, would be proud. 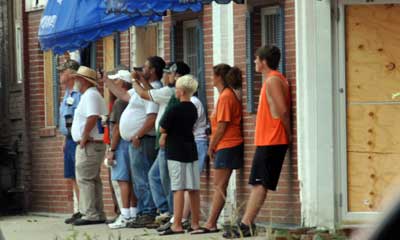 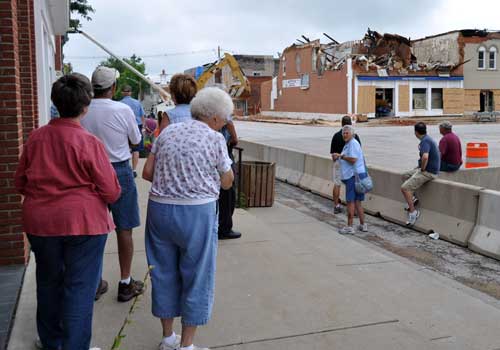 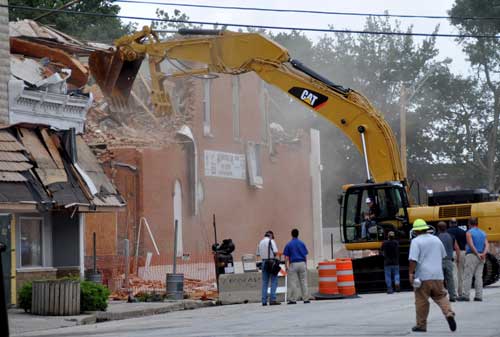 What everyone in Elmwood was watching 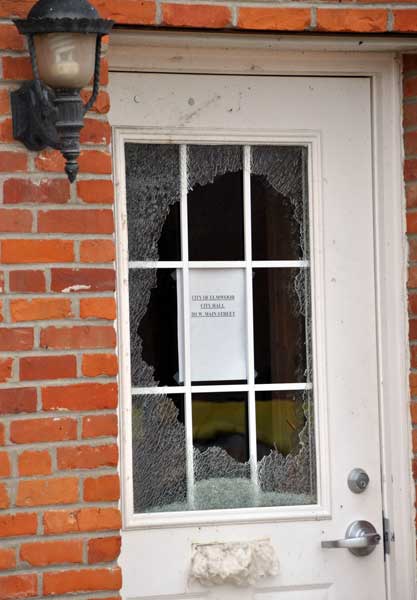 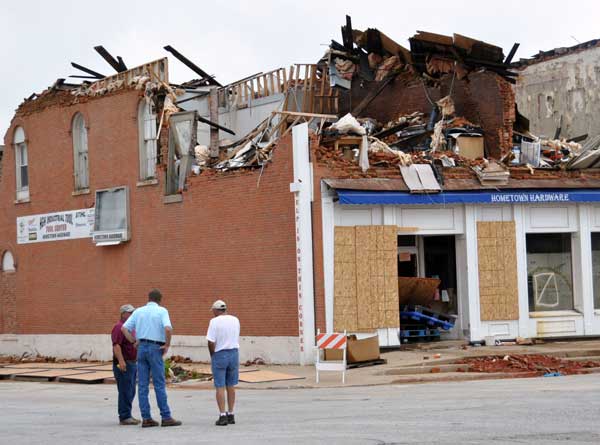 3 thoughts on “Help is on this corner”