One year, when I worked at Expeditors, I dressed up as Cousin It for Halloween. My costume was incredibly simple — all I had to do was wear a trenchcoat, brush my hair over my face, and put some sunglasses over the hair.

I suspect the reason I won the costume contest was actually not how I looked, but how I acted. Whenever I wasn’t at my desk (and I don’t think Expeditors got their money out of me that day), I would stand up, hold my arms at my sides, and scuffle-scoot across the carpet, making high-pitched bursts of squeaking noises. In a men-must-wear-ties business environment, it drew a lot of laughs.

That Halloween evening, I came home from work, triumphant with success. I wanted to take my winning costume out again, so I talked Barry into going to Trolloween that night. “But what am I going to wear?” he asked.

I started thinking, and I got out the life-sized crow my Dad had given us in honor of our boat, the Northern Crow. “How about putting this on your shoulder?” It was styrofoam-light, with realistic glossy black feathers. I dug out a huge green jacket with a hood to go with it.

“You look great!” I enthused, after he was dressed. His face was hidden deep in the hood, and the crow looked real, wired onto his shoulder. He’d added black longjohns, a pair of leather hiking boots, and a big wooden hiking staff. But peering into the mirror, he frowned.

“You’re not a kid any more. It’s only little kids who get asked, ‘What are you?’ on Halloween!”

That night, my award-winning Cousin It costume was a complete failure. Without the bright fluorescent lights of the office, I couldn’t see a thing. And my scoot-and-squeak performance didn’t translate to the large crowd, nor was it fast enough to keep up with the parade.

But Barry was a huge success. Everyone who saw the crow did a double-take and asked if it was real. Over and over, I heard (although I couldn’t see a damn thing) people saying to Barry, “Great costume, man!”

At the end of the evening, he was as triumphant as I’d been earlier.

Since then, we’re not afraid to dress up in non-representational costumes (although Barry did dress as Jolly Roger Rabbit at Burning Man in 2007). Our costume bins are full of things that are colorful and wildly patterned, and it’s just a matter of putting the right colors and textures together with the right wigs, hats, and shoes.

The next time you dress up, if anyone asks what you are, here’s what you do. Put your arms at your sides, shuffle-scoot quickly across the ground, and make high-pitched bursts of squeaking noises. I guarantee, they won’t ask twice.

Following are a few of my favorite Burning Man costume photos. Please be forewarned, some of the images are very revealing, and although there is no outright nudity, you might see more of Meps (and some other people) than you really want to. 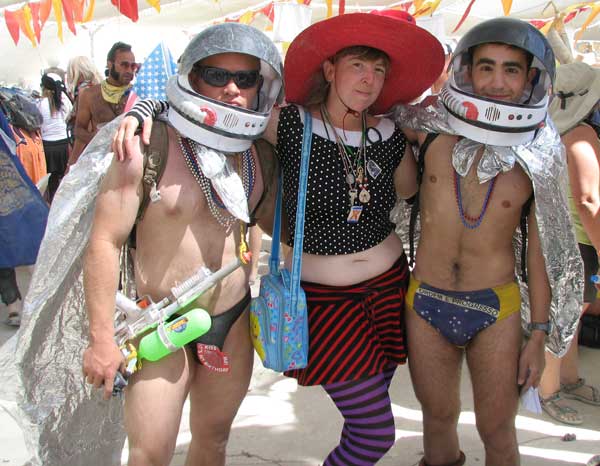 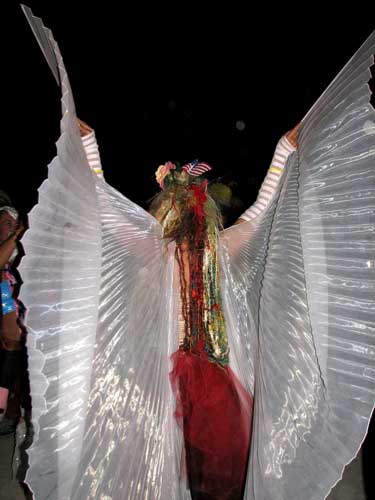 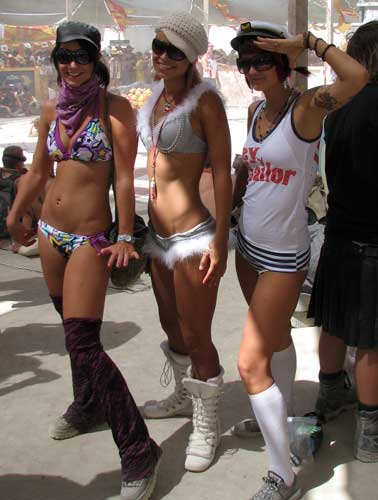 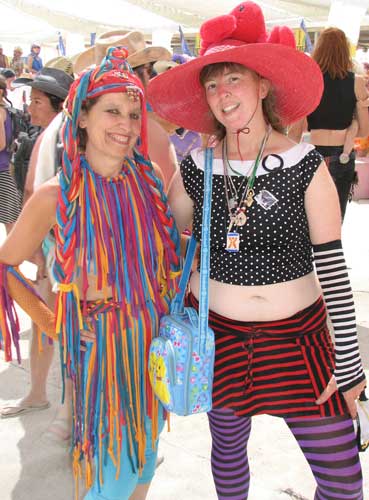 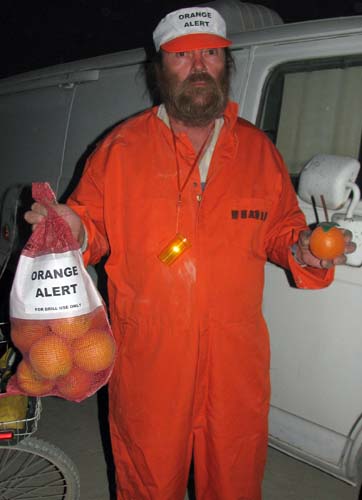 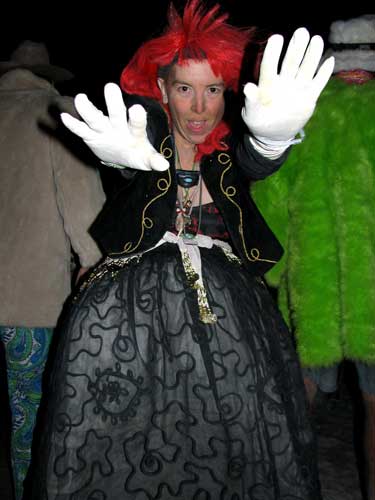 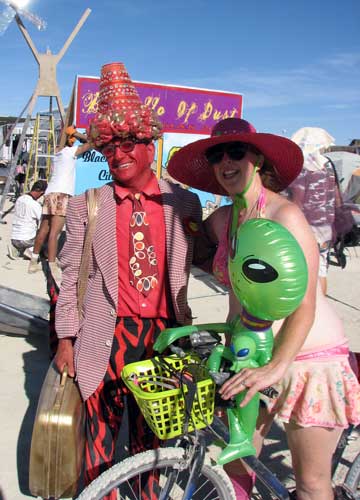 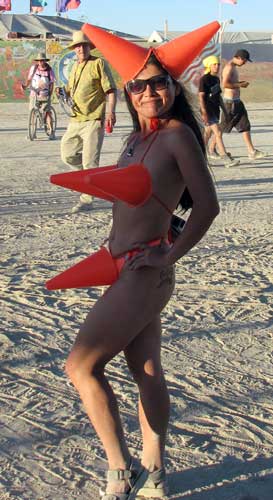 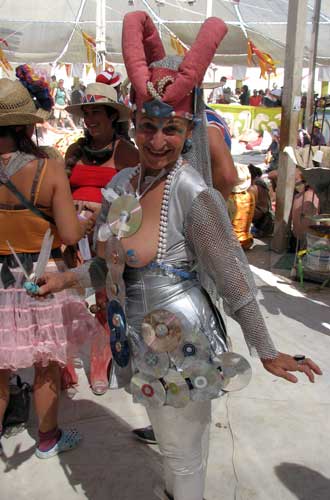 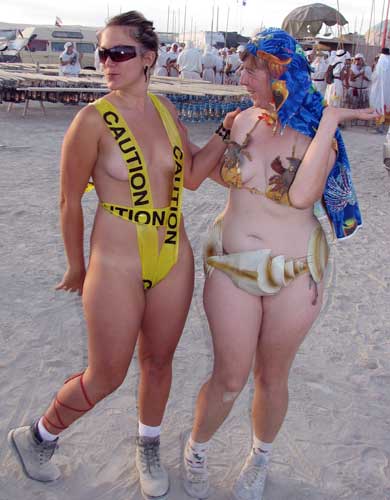 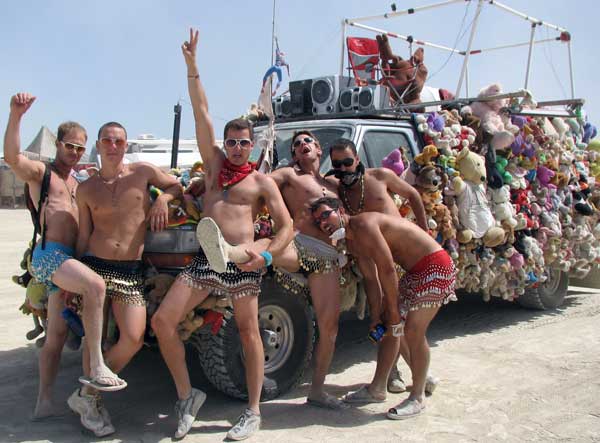 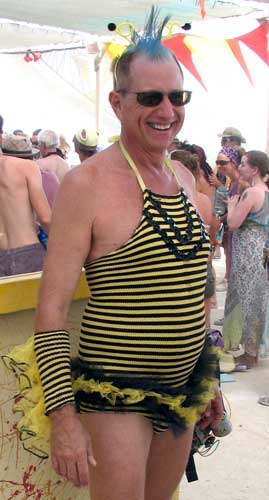 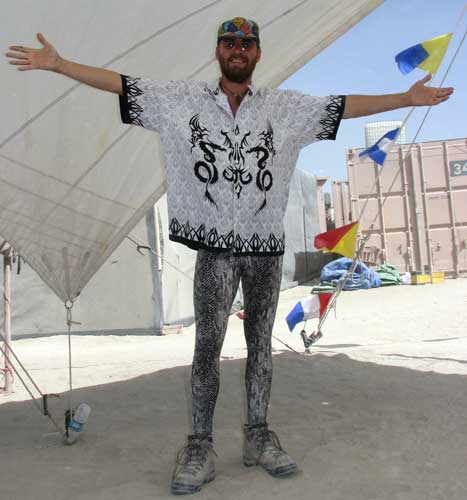