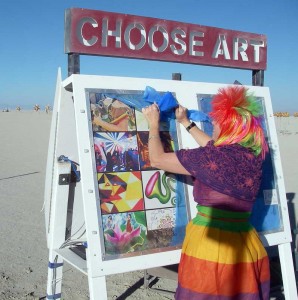 Meps unveils the artwork for the first time at Burning Man

Eleven months ago, I grabbed a tiger by the tail, and when it took off, I didn’t let go. As is often the case with tigers that one is holding by their rear-most appurtenance, I didn’t recognize it at the time.

It started so innocently. Barry and I were sitting in Philip and Linda’s backyard, in Santa Clara, California. “Take a look at these,” said Philip, whose Burning Man playa name is “MacGyver.” He held up a couple of mysterious little metal boxes. Then he wired them to a power supply (using duct tape, chewing gum, and his Swiss Army knife) and turned them on. The backyard was flooded with intensely bright, colored light.

“They’re LEDs,” said Philip. “I’d like to do something with them at Burning Man,” he said. He went on to say that he envisioned people dancing in front of the lights, casting long shadows across the desert.

I took the bait and jumped out of my chair to dance around the backyard in front of the lights, making shadow-puppets. I could see what he meant. Wouldn’t it be fun to play with these bright lights at Burning Man?

Barry and Philip starting talking about how to feed a sound signal through the lights, so they would change color and intensity in time to music. Linda suggested that the music should be something more varied than Burning Man’s ubiquitous dubstep. I said people should be able to select the music, but the selection process should be engaging and mysterious.

The brainstorming continued across the country for the next couple of months, and in January, Philip and I submitted an art grant. We didn’t get an honorarium, but by then, we had put so much work into it, we were committed. We scaled the costs back as much as possible and decided to go for it. 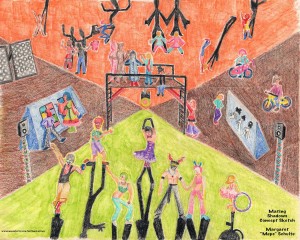 In my concept drawing, four speakers face into the center of a cirle, with the bright lights mounted on scaffolding in the middle. To one side is a free-standing art gallery displaying 16 pieces of backlit art, each with a single unlabeled button. Pressing a button would play the music and activate the lights, but the only indication of what kind of music to expect would be the artwork itself.

It looks so simple. Behind the scenes, though, is a massive year-long effort.

Mating Shadows, as it came to be known, started with 4 friends in the backyard and grew to involve about 15 people, including engineers, fabricators, and artists from as far as Australia. Barry and I stored our boat on the east coast, flew to San Francisco, and worked on it off and on all summer. Philip retired from his job and dedicated his time to it. By then, Linda had shifted her work schedule to part-time, so she had mornings off.

The Mating Shadows team created and integrated custom electronics and software, an amplifier, backlighting, safety lighting, underground cables, signage, and batteries. Some efforts were multiplied by 16, such as installing 16 switches with 16 circuit boards. We recorded 16 sound files for daytime operation and selected 16 playlists for nighttime operation. Eight artists created the 16 pieces of art, taking inspiration from their choice of 30 songs.

To call it an eclectic team would be an understatement. Some were old friends or relatives, like Linda’s cousin, Claire. Others, intrigued by my posts on Burning Man discussion boards, contacted me by email. Scary volunteered to transport our baby to the playa, carefully packed in the back of his mutant vehicle, the Cuddle Shuttle. Managing the efforts of such creative, energetic, brilliant people was a lot like having a tiger by the tail.

If you think this is aggrandizement, let me introduce you to some of our quirky construction crew: 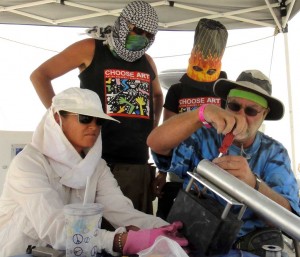 Claire, Roger and Linda help Philip wire the speakers in a dust storm

Primary Conceptualizer & Lord of Small, Fussy Parts: MacGyver (aka Philip Wilson)
When I met MacGyver 3 years ago at Burning Man, I simply noted that that he gave great hugs. I later learned that this giant guy with huge hands and size 16 feet has incredible focus and dexterity. He can painstakingly, lovingly solder miniscule, elaborate electronics in the middle of a full-blown dust storm.

Illuminator & Magical Maker of Things: Big Barry Stellrecht
If you’ve read this blog before, you know that my husband can create or fix just about anything on a boat. The great thing about his involvement with Mating Shadows was that it did not have to float, so he worked twice as fast, with half as much stress. The only stressful thing was the lack of good tools; he was forced to do unspeakable things with a circular saw. Philip just shook his head, saying, “Barry is amazing.” To which I replied, “This is nothing. You should see what he can do with a table saw.” When Philip later found out he’d had access to a table saw all along at his Mom’s house, Barry almost cried.

Reticent Enabler & Secret One-in-Charge: Lucky Linda Knepper
The miracles Linda accomplished with her mornings never ceased to amaze me. Parts and materials appeared right when we needed them, wood surfaces got primed and painted, and a critical piece of wood that the amazing Barry miscut was replaced by a correctly-sized one. 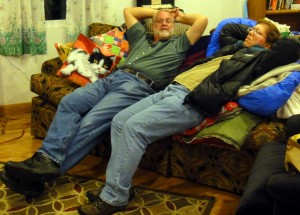 Philip and Jason conduct a software meeting on the couch

Superhugger & Mastermind of Bits & Bytes: Jason Hollister
Jason, an old friend of Philip and Linda’s, showed up one day to write the software. I provided him with a carefully-written description of the user interface, but he made it clear that he needed more of something before he could begin. I finally realized it was chips and salsa, not documentation, that his programming required.

Virtuoso Craftsman Extraordinaire: Archimedes (aka Blaine Gilruth)
We met Blaine and his wife, Suzy, at the boatyard in North Carolina. They started outfitting a boat at the same time we did, but they finished, took it out cruising, sold it, and moved back to the west coast before we even made it out of the boatyard. When Blaine volunteered to help with construction, I was super-excited. Now I would see first-hand how he gets 12 hours worth of quality work done in 37 minutes.

These two members of the setup crew are extra-special, because they are also two of the artists: 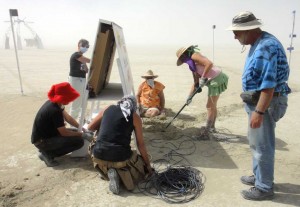 Renaissance Woman: Halcyon (aka Suzy Gilruth)
We had a serendipitous moment at Burning Man last year, after placing my brother Stevie’s ashes in the temple. I walked out of the building and right into Suzy and Blaine, probably the only people at Burning Man who had met my brother. Suzy showed me the beautiful piece of artwork she had made on the temple wall, which is how I knew I wanted her art in our gallery. She was probably the most multi-talented member of our team, creating four completely different art pieces and performing four audio recordings to go with them. On-playa, she provided the t-post driver (“It’s mine, not Blaine’s,” she told me), drove fenceposts and rebar, dug and covered trenches, ran wires, and did it all while looking cool as a cucumber in a ruffled green mini-skirt and a pink Choose ART top with spaghetti straps.

The Man Who Can Do Anything, But Doesn’t Know It: Roger Cunningham (aka Rumi-Nator)
We chanced upon Roger one Christmas Eve in Vero Beach, Florida, where we rafted up with his boat in the mooring field. I’m sure he had the only dreadlocks in town. He was taking his boat to Key West, and although we haven’t rafted since, we’ve ridden buses together in Miami and shared margaritas at a Hooters in Jacksonville. Roger provided two photographs and audio recordings for the installation — somehow managing to include the phrase, “a quivering, slobbering mess of capitulation.” He showed up on our doorstep in Santa Clara in August, told us he was lousy at soldering, the proceded to make a liar out of himself by soldering together the entire backlighting system. At Burning Man, he cheerfully volunteered for both setup and takedown, looking just as good as Suzy, but not as modest. 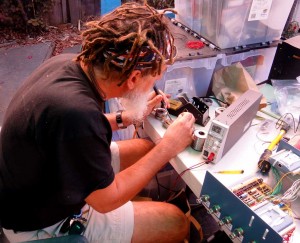 Roger revisits a lifelong belief that he can’t solder 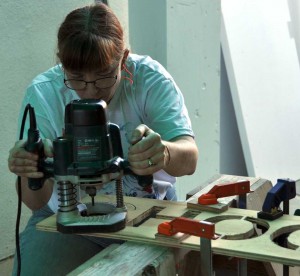 Me, with the router and the Choose ART sign 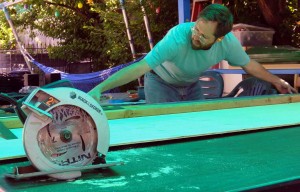 Barry with the danged circular saw 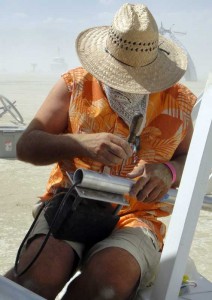 Blaine started digging trenches at 7:30 in the morning and didn’t stop for many photo ops. 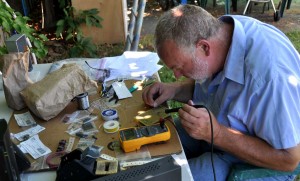 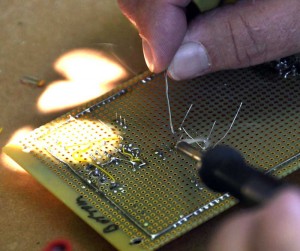 Philip solders parts on one of the small boards

Roger’s legs are not just behind the console… 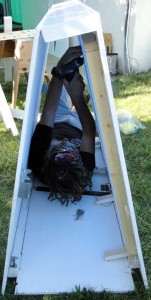 …he’s inside it! I think he’s used to working in tight spaces, given the size of his boat. 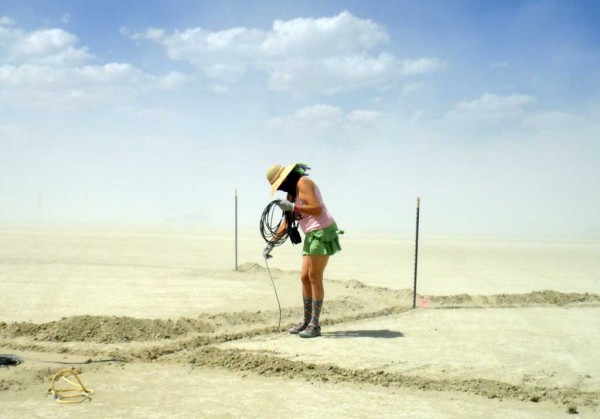 11 thoughts on “Grabbing a tiger by the tail”