What has four letters, starts with a vowel, and has lots of corn and cows? Ohio. Iowa. Sometimes, it’s hard to keep them straight, even when you’ve lived in one of them. 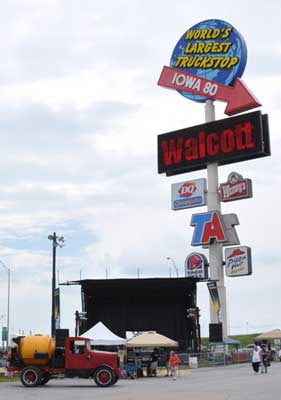 Not sure what we're stopping for, but it looks interesting!

About fifteen miles into Iowa, a gigantic sign caught my eye. “World’s Largest Truck Stop.” There was a traffic jam associated with the world’s largest truck stop — the off-ramp was backed up with cars and semis. Traffic jams are unheard of in a place where cows outnumber people.

At 65 mph, I had only an instant to decide. I switched off the cruise control and joined the traffic jam.

The off-ramp was perched high above the truck stop, and we could see down into vast acres of trucks, cars, pedestrians, and — huh? Circus tents? What was going on at the world’s largest truck stop?

It felt surreal to follow signs for overflow parking without knowing why. The Squid Wagon was directed to a field, about a half mile from the center of the activity. Just after we’d locked up and grabbed cameras and sun hats, an ancient yellow school bus came by and picked us up. Someone handed us a program, which said, “Welcome to the 31st Annual Walcott Truckers Jamboree.” Bouncing the whole way, the school bus delivered us to the entrance of what the program said was “The Best Trucker Party in the Country! FUN! for all.”

Now, Barry and I are always looking at big trucks and asking each other, “What do you suppose that thing is for?” “Why is he doing that?” “What do you think is in there?” Since neither of us has ever been inside a semi, we spend a lot of time arguing about the possible answers, without any real facts on which to base our positions. We call it “talking out of our butts.”

Finally, we could get some answers. Just the previous day, we’d debated this one: Why pay to be weighed at a truck stop, when weigh stations do it for free? The first exhibitor at the show, a representative of CAT Scales, answered that one — truckers want to make sure the weight of their load is legal before they drive into a weigh station, where they will be fined if it’s not. Also, some loads, such as household goods, are charged by weight. 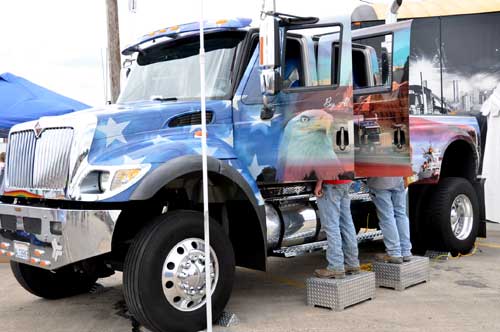 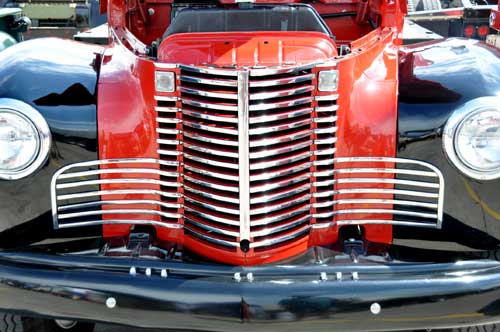 The lines of this truck's grille are beautifully art deco.

We wandered the big tent, where exhibitors were touting everything from dip mixes to air filters and 12-volt mattress warmers. One driver had self-published a novel, but without an audio version, he wasn’t getting much interest from his fellow drivers. Trucking companies were handing out freebies to anyone with a CDL, hoping to recruit drivers. The American Lung Association and the Iowa Soybean Association, unrelated organizations with different interests, were both pushing biodiesel. I stopped to look at literature for Women in Trucking, and two women pounced on me as a potential member. Later, when I read their newsletter, I realized I should have asked about their Women in Trucking tattoos.

We left the exhibits and started strolling through the rows of trucks, taking pictures of shiny chrome and elaborate airbrushed graphics. What was the story on these trucks? Were they for sale, or just for show? Who had brought them?

The acres of blacktop gave off waves of heat, and the only shade came from the trucks themselves. We came upon a small group in folding chairs, chatting animatedly in the shade between two trucks. 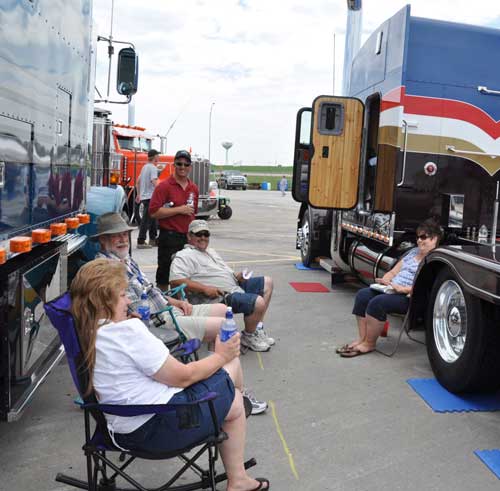 A group of truckers hanging out in the shade of their trucks. The one on the left has a shower.

When questioned, they explained that they were owner-operators who came every year. I asked about their trucks, and one couple pointed to the one on the left, and other pointed to the one on the right. “Are you staying in your trucks?” I asked. “We’re staying in the hotel,” answered one of the women. “But they’re staying here. She has a real bathroom in hers, with a shower,” she said, enviously. The sleeper on the truck with the bathroom was about three times larger than other sleepers, and had larger windows. It looked like a very sturdy RV.

I was getting a glimpse of another world. Barry and I had learned a little bit about the RV crowd, mostly retired people who drive around the country and pay handsomely for the fuel to do so. Now we were meeting folks with smaller accommodations, but bigger rigs. They’re proud of the fact that they get paid to do their traveling.

I began to understand the event — an excuse for truckers to relax and spend time with people who understand their way of life. What we had stumbled upon was something like the Seven Seas Cruising Association Gam for offshore sailors, or the Sturgis, South Dakota, motorcycle rally. I even felt elements of our favorite annual event, Burning Man.

Like Burning Man, there was art: One man’s purple truck was airbrushed with shining white horses charging out of blue surf. The multi-talented owner-operator had painted it himself. Not only that, but he’d built the interior of the sleeper himself, the only one we saw that included a fireplace. We climbed up into the cab, with hundreds of shiny buttons and switches, to see the sculpture on the back wall of the sleeper, a continuation of the horses in surf theme. 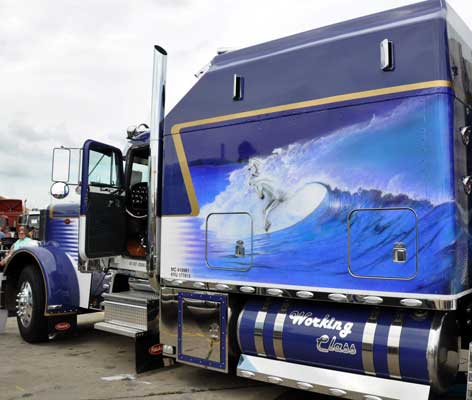 The left side of the truck with the fireplace, original artwork by the owner/operator 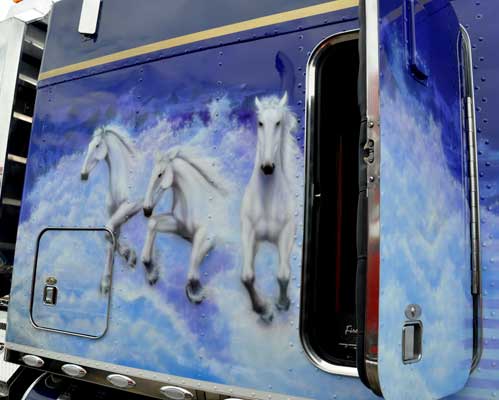 The man who drives this truck is also the artist 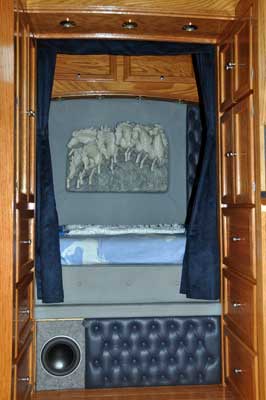 This relief sculpture is not original, but was chosen to match the airbrushed artwork on the outside. Some of these sleepers are tres elegant on the inside!

This truck actually has a tiny fireplace in the sleeper 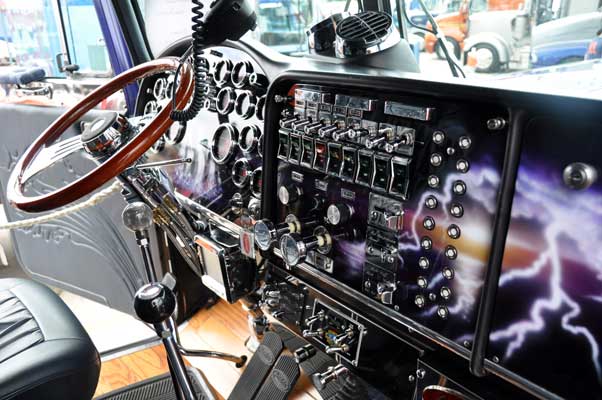 This is the cab of the truck with the fireplace and the horses and surf artwork. She's a beauty. 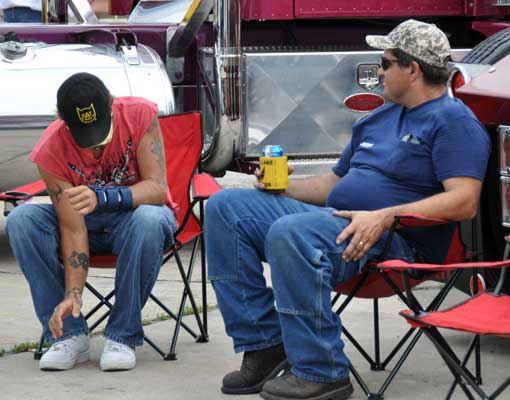 He just looks like an ordinary truck driver, but the man on the right is more than that -- he's the artist who created the truck shown above

The same man told us we absolutely had to stay for the nighttime party. He described the illuminated trucks in the Lights at Night Competition, and said people would be walking around and admiring each others’ trucks all night. There would be a fireworks show and a concert by big-name country musician Tracy Lawrence. I had to take his word that Tracy Lawrence is famous, having never heard of him, myself.

I seriously considered his recommendation to stay. I felt very welcome, and we could easily have hung out all day and through the night, partying with the big truck people (while listening to music we don’t like). But in the end, we decided to push on across Iowa and save our free time for places that were greener and cooler (and have better music).

We drove about 20 miles up the road and stopped at a rest area, where I struck up a conversation with the man who was cleaning the restrooms. He was a very overweight man, one of the largest I’ve ever seen, and admitted that he’d hardly been away from home. I sensed that working in a rest area made him restless, wishing to see more of the world. When I said that we’d just come from the big truck jamboree, his face lit up. “I’m going to that tomorrow,” he told me.

Then I started telling him what I’d heard about the nighttime party, the fireworks and the music and the illuminated trucks, and he got more and more excited. “I get off at nine,” he said, “so I’ll just go over there tonight!” I was glad that I’d given him a little excitement to look forward to. I was also glad that there would be one more person at the Jamboree to appreciate all the work that went into the decorated trucks.

Barry and I continued west on I-80, passing a few trucks and being passed by others. Each time, I thought of the person driving it, rather than just the vehicle. Were they aware of the party they were missing? Maybe they don’t like country music, either.

In the future, driving on the freeway, I’ll look up — because no matter how high the Squid Wagon is, trucks are always many feet higher — and feel a connection to the driver. And if he looks my way, I’ll give him a friendly wave. We might meet again someday, at the Walcott Truckers Jamboree. Next time, I’ll stay for the concert. 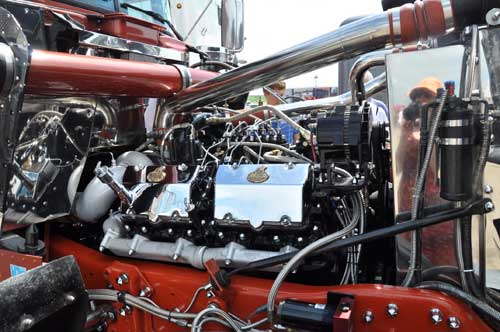 Some folks display their shiny truck engines. You can see my reflection on the right. 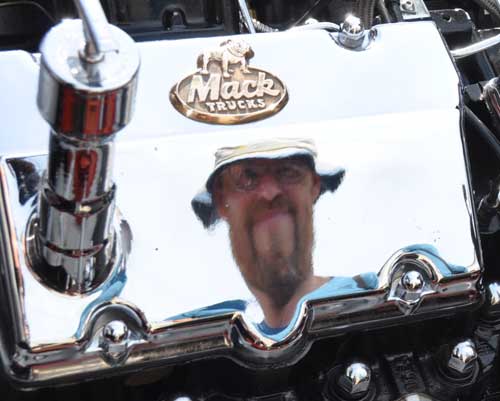 Barry's face is reflected in this truck's engine.

2 thoughts on “Getting into a jam – by choice”