A good friend of ours, Bill Brown, recently pointed out that the U.S. was only involved in World War II for 3 years and 10 months. In the years since then, Americans have not shown patience for any military action that takes longer than that. “Look at Korea, Vietnam,” Bill says. That may explain why Americans no longer support the war. If Bill’s theory holds true, we should see this war resolved by January of 2007.

Bill, who’s not a senior citizen but an early retiree like myself, hangs out regularly with a group of senior citizens at a coffee shop in Anacortes, Washington. They’re the kind of guys who go to the coffee shop every morning because after they retired, their wives just wanted to get them out of the house. So when the subject of the war on Iraq came up recently, Bill was amazed to hear vocal opposition from the elderly gents. The way he describes it, they’re right-wingers who probably supported the war initially, but don’t seen any reason to continue. They probably agree with the Australian protest organizer, Jean Parker, who said “Iraq is a quagmire.”

It’s been three years since the Bush administration launched the war on Iraq. In that three years, the coalition forces have lost over 2500 people, an average of just over 2 a day. The Iraqi people, on the other hand, have lost 35,000, an average of 30 a day — our soldiers haven’t just killed soldiers and insurgents, but also civilians and children. 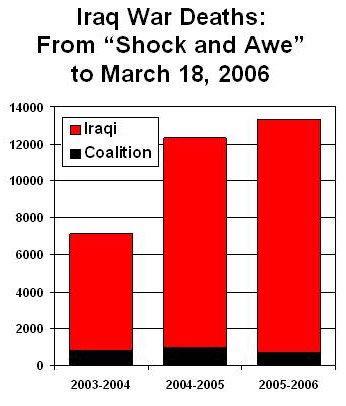 Imagine living in a country just a little bigger than California, but with fewer people. Not only are 30 people killed every day by bombs and guns, but countless more are injured and traumatized. And the United States is responsible.

There’s a group called Not in Our Name, whose pledge reads, “we believe that as people living in the United States it is our responsibility to resist the injustices done by our government, in our names.” It’s a simple message: Stop killing people on my behalf.

I’ve been pretty outspoken on this, since my first peace rally in 2001, before the U.S. invaded Afghanistan. But now, it sounds like more people are beginning to agree. A recent Washington Post-ABC poll says that 57 percent of Americans believe the war with Iraq has not been worth fighting.

Around the world today, anti-war protestors are rallying, because it’s the third anniversary of the war. Demonstrations have been held everywhere from Sydney, Australia, to London and Tokyo. But what’s interesting are the protests here in the U.S. — but not the news-making ones in Washington, D.C. or New York or San Francisco.

What’s amazing are some of the 34 local listings found in and around the Seattle area. As expected, there are rallies and vigils in Seattle, but also in Bellingham, Olympia, and Tacoma. Then the list gets even more interesting.

Bellevue, just on the other side of Lake Washington from Seattle, has a reputation for being conservative. There are at least two protest events there.

Port Angeles is having a rally, to be held, fittingly, at Veteran’s Park. The folks in Port Orchard are going to rally with empty boots and signs. In Twisp, a group is gathering “to commemorate the 750,00 children we killed during the sanctions.” Twisp is a tiny town in the middle of nowhere, population 909.

One of the more creative publicity stunts is the “Death of Democracy” funeral procession, in Vancouver, Washington. Their instructions say to “Wear black, at least on your upper half, and have gas in your car.” On the one hand, it’s likely to be seen by a large number of people. On the other hand, driving your car around protesting a war over oil is an oxymoron.

In Forks, the call is to “Commemorate the over 2,314 American military personnel killed; call for Peace & the end of the war; defund the war, defend our communities, fully fund the VA, end poverty, rebuild the Gulf Coast. Uphold the Constitution of the United States of America.” Forks is a little place in the middle of nowhere, kind of like Twisp.

Reading between the lines of the Forks announcement, these are a new kind of protestors. They may not have been out demonstrating before the war, but they’ve lost patience with it now. After three years, it’s time to end it and move on.

It was a mistake, and it wasn’t worth doing. As the war continues, I can only be more vocal in saying, “Not in my name.” Unless we end it, and we take responsibility and apologize for our mistake. Then I’ll be glad to help. Apologize to the families of those we killed? Yes, gladly, in my name.