About a week ago, I wrote about our decision to stay here in the boatyard for the holidays. At the time, I was feeling sorry for myself, and my tone was so wistful that friends and family responded with consoling emails (my favorite was the invitation from Australia).

Then the celebrating started, and I forgot to be sad.

My dictionary defines “jamboree” as “a large celebration or party, typically a lavish and boisterous one.” Some definitions involve Boy Scouts or country music.

One of our holiday activities was attending the Christmas show at the Crystal Coast Jamboree with the Bock family, boatyard employees, and liveaboards. But the real jamboree was the evening’s dinner, held at a Japanese steakhouse. The chefs flipped and twirled and tossed the food to us as though we were trained seals. At one point, Kenny egged Dale into eating some wasabi for the first time. “DAMN!” he exploded, practically spitting sushi. “What IS that stuff?” 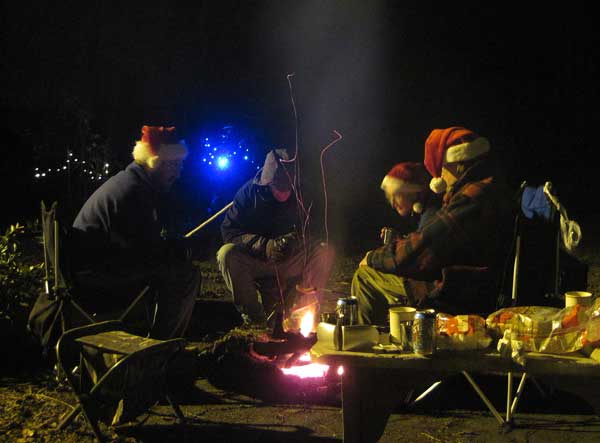 The days grew shorter and the nights longer. On December 21st, we celebrated the Solstice with a bonfire — well, actually a little campfire on the edge of the sandblasting pit. We ate roasted weenies, melted cheese sandwiches, and toasted marshmallows. Most importantly, we ran a 100-foot extension cord and plugged in a crockpot full of mulled wine. We were warmed inside and out.

It takes more than food and fire to properly celebrate the Solstice, though. This is the window between the lunar and solar new years, when evil spirits inhabit the earth and must be kept at bay by merriment and partying. At least, that’s what Philip of Oryoki said.

Our merriment included dancing around the fire in leafy green headdresses and playing some extremely loud percussion. “Extremely” means that some steel boats are more fun to beat on than drums. We bid the moon farewell (guess who did so by actually mooning it) and listened to every song I could find in our collection about the sun. “Eu Quero Sol” and “Don’t Let the Sun Go Down on Me” were the most apropos. 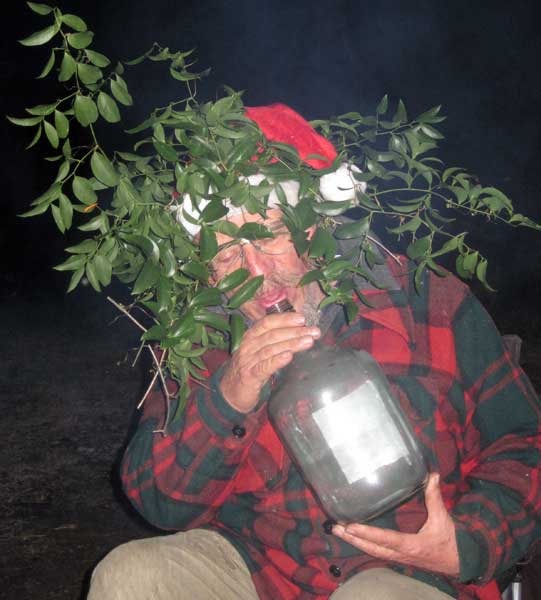 Then came the event that was my real reason for staying over this Christmas: A North Carolina oyster roast. I stuffed myself on steamed oysters dipped in melted butter, and Barry ate multiple helpings of deer stew and hush puppies. Dale sucked down more hot vinegar sauce more than wasabi peas, though. Everyone was smiling as we stood around the fire barrel, relaxing and enjoying each other’s company without any of that silly boat work. 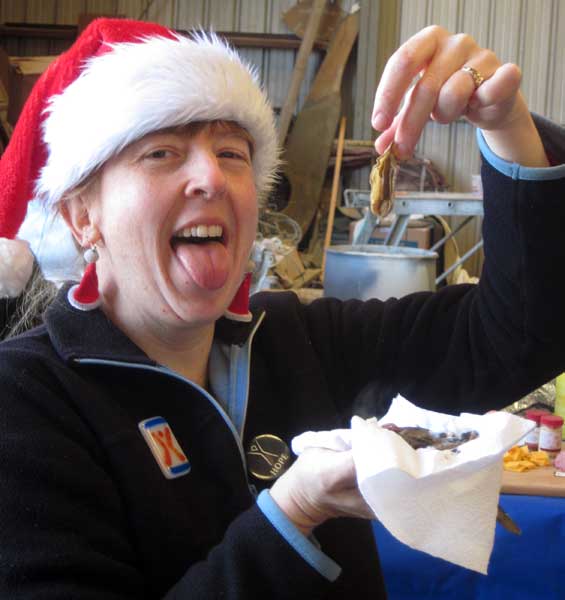 Meps gets ready to slurp an oyster 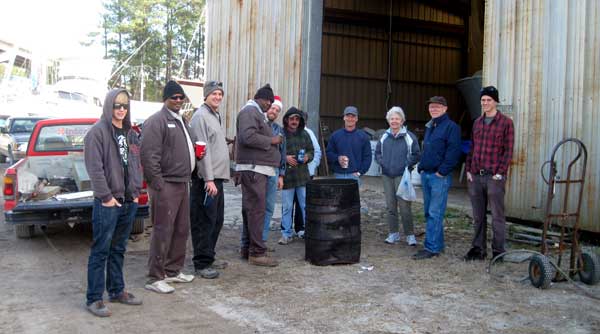 Warming ourselves around the fire

After the oyster roast, the boatyard closed for the holidays, but we kept the fires of holiday spirit bright, celebrating Christmas Eve and Christmas aboard our boats. Flutterby was chock-full of little wrapped gifts, sent from Washington and Florida and Oregon and Ohio, and cards — some of them homemade — from everywhere. Oryoki was decorated with garland and colored lights. We sported Santa hats around the boatyard and debated on which side the pom-pom should dangle.

Our Christmas dinner was a delightful sort of scavenger hunt — I got my 12-pound turkey out of the refrigerator on Ula G and took it to the lounge to wash it. Then we plopped it onto the huge propane grill that we’d rolled from Pelican (a monohull) to Oryoki (a catamaran) to keep it out of the rain. The turkey was just the centerpiece — the table on Oryoki groaned under cranberry sauce and stuffing and homemade rolls and veggies. The butterscotch pie waited out in the cockpit, and the whole thing was washed down with Marilyn’s homemade egg nog. 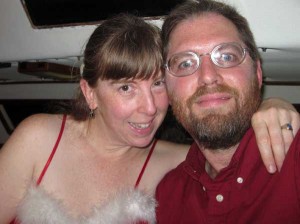 I wore my Santa's helper lingerie all day on Christmas 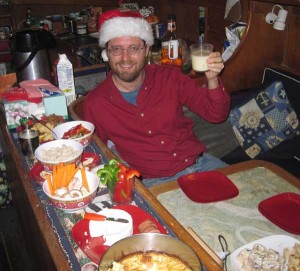 Barry on Christmas Eve aboard Flutterby. Hot artichoke dip was a hit! 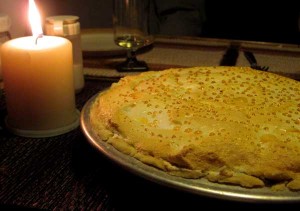 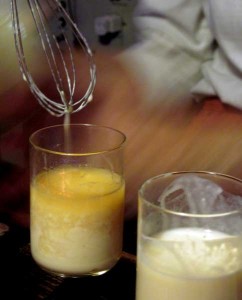 Beginning on the 18th, each day the spirit of generosity and gratitude increased in my heart, until I felt like the Grinch — my heart was three sizes larger. I was connected to friends and loved ones all over the world, even when the phone stopped working for 24 hours on Christmas Day. There was so much love, right here! How could I ever feel wistful or sad? It was the best Christmas EVER.

2 thoughts on “Everything but the Christmas tree”