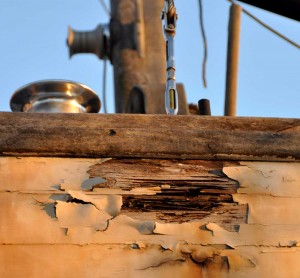 Like a young woman whose husband went away to sea, she waited patiently by the water. She grew old but never lost her beauty, and he never returned.

She was a grand old wooden sailboat, agreed by all to be the Belle of the Boatyard. Everyone who had ever taken a stroll in the boatyard was drawn to her elegant lines and sweeping overhangs. I had photographed her numerous times, capturing images of her accelerating but lovely decay.

There was no name on the boat, and her white paint was peeling to the silvered wood, highlighted with golden-orange rust stains. Rumors abounded about her mysterious past. Had she been owned by someone famous? How did she end up here? How could something so breathtakingly beautiful have been abandoned like this?

And then, around this time last year, I ran into Kenny on a Saturday. He had a big smile on his face.

“Whatcha doin’ out here on a Saturday?” I asked him.

There’s a big movie studio in Wilmington, and a movie crew had driven out to the boatyard that morning. They were looking to buy a lot of old boat parts to use in a set, and Kenny suggested that they would do better to buy a whole boat. Then, in his low-key way, he showed them several choices. 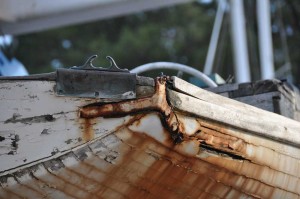 Even her rust was beautiful

Kenny owns a handful of the older boats in the yard; people sometimes stop paying their storage charges and eventually he has to take possession. What came as a surprise was that he didn’t own this one; she was not his and she was not for sale. I suspect that people had tried to buy her many times over the years. This time, her owner said yes.

That afternoon, when there was no one around, a truck pulled up next to the boat. A couple got out, and they walked around the boat. Eventually, the man climbed up the ladder and started carrying personal things off the boat. The woman went back and sat in the truck for hours.

The boat’s name was Fresh Breeze. She was his dream boat. She’d been in this very spot for 18 years.

The man’s name was Ken, and we sat and talked about how it happened. The dream and the boat came first, and then the marriage to someone who was afraid of sailing. 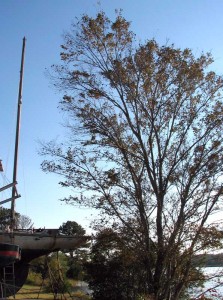 Over 18 years, the tree grew taller than her mizzen mast and was home to many birds

When I asked how long it had been since he’d been out to work on the boat, he couldn’t remember. “A couple of years, I guess.”

He pointed to the tree beside her. “That thing blocked my view of the water, so I cut it down a couple of times.” The tree was now taller than the mizzen mast, over 30 feet tall.

It started with a friend who had a sailboat. Ken recounted their adventures in the waters around Pamlico Sound like it was yesterday. Then he decided to buy his own boat and fix her up. He couldn’t wait to take his friend out sailing. At first, he came every weekend, puttering and painting. Then every other weekend. Then every few months. Years passed. Now his friend has died, and Ken can never take him sailing.

As his wife sat in the truck, I helped Ken grieve his dream. That dream was alive as long as he owned the boat and paid the monthly storage bill, even when the portlights fell in and the water poured out through the shrunken timbers. We didn’t speak of that. We talked about the places where he wanted to sail, and how much fun it is to anchor in remote places away from other people.

Eventually, Ken started to ask me about Flutterby, and my sailing dream. At the time, we had been hauled out for nearly three years, overwhelmed by the magnitude of our refit. The difference was, Barry and I were working together. Ken derived some comfort from the fact that some women do have a sailing dream, that we want to fix up boats and go cruising, too. His wife hadn’t been able to do that, but it was apparent that he loved her and was glad for the time they’d spent with their grandchildren.

He told me that the love of his family turned out to be more important than his sailing dream. He said it with awe, as if he was realizing it as he spoke.

A few days later, a boat-transport company came and carefully loaded Fresh Breeze onto a truck to go to the movie studio in Wilmington. I talked with Ken again that day, and he was doing better. He gave me lots of encouragement. As a matter of fact, we splashed Flutterby only about a week later. 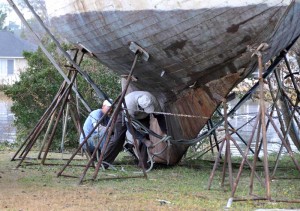 Getting the grand old lady ready for her last voyage

I got tears in my eyes as I thought about Fresh Breeze, who will never be launched. People like Ken want us to carry the torch and live the dream for them. They’ve gotten called away by other responsibilities — work, family, other interests. But I can’t live someone else’s dream, only my own. I get called away, too, and I have no regrets about that. My family and friends are more important, too.

Now Ken’s lovely belle is going to be a movie star, and in a strange twist of fate, she just might inspire someone else’s sailing dream. Her parts are being used in a movie called “Journey 2: The Mysterious Island.” Film star Michael Caine plays a grandfather stranded on an island.

If even one young movie-goer is inspired by the movie to take up sailing, it will be a fitting end to the life of Fresh Breeze. We’ll never know who they are, but they will be carrying the torch for Ken, and all the others whose sailing dreams never came true. 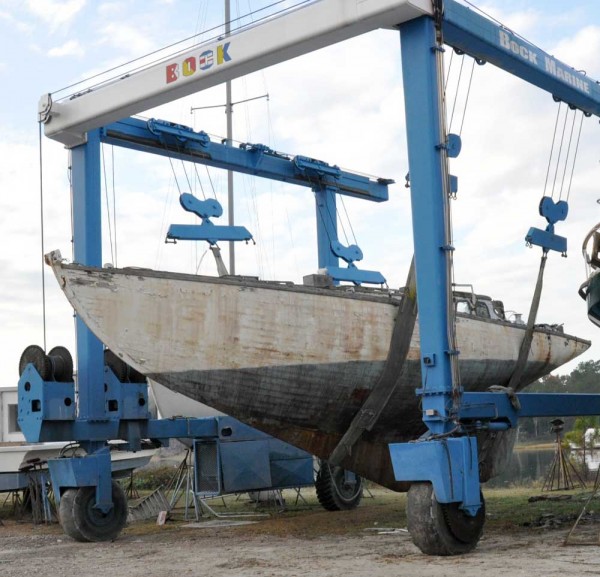 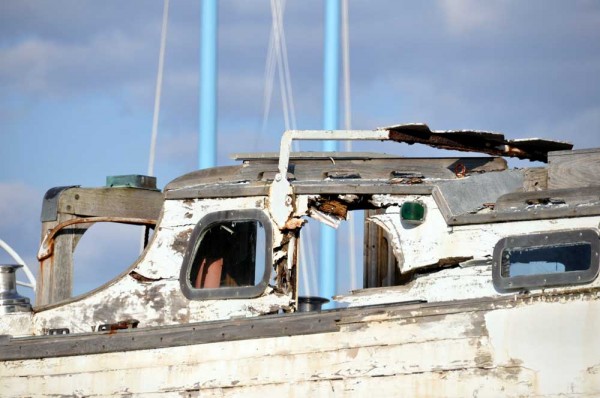 The old and the new: Flutterby's masts through Fresh Breeze's portlights

9 thoughts on “Dream on”