I was feeling a bit of frustration,
And in search of a blood bank location.
But then yesterday saw,
At the town Mardi Gras,
The big bus for my tribute donation.

The Bloodmobile drove past us, behind a marching band and in front of a bunch of pirates with a cannon, in the St. Marys Mardi Gras parade. I didn’t think twice about it until I saw them parked at the end of the parade, between the children’s rides and the car show. Just about then, a hoard of biting gnats descended upon us, and Barry and I decided that it was better to donate the blood to a good cause — especially since it’s that time of year when we like to donate blood in memory of Becky Johns.

“Gnats are not a cause, they are an institution,” says Barry. 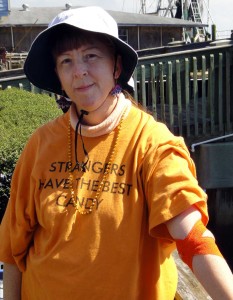 6 thoughts on “Donating to a better institution”