The place where we’re hauled out right now, St. Mary’s Boat Services, has a unique way of turning a little boatyard into a big one — they put many of the boats on cradles, so they can be moved easily and packed more densely. They use a forklift and a specialized hydraulic trailer to move the cradles around.

There’s a fellow here named Jeff who happens to be the most amazing forklift operator I’ve ever seen. He can do ballet-like things with the forklift that other boatyards need cranes and other complicated equipment to do. Yesterday, I heard him telling someone that in addition to training and certifying forklift operators for all of southern Michigan, he used to be able to pick up a quarter from the ground and hand it to you — using a forklift. “Not this one, though. The controls are too slow.”

Yesterday, Jeff and his boss, Rocky, needed to move four boats in order to make room for one who was ready to splash today. The first two moves were easy, just towing a couple of folks on cradles to new spots. Flutterby was the third boat in, on jackstands, and right after they picked her up with the Travelift, a van pulled in, delivering two shiny new cradles. There was quite a bit of excitement, because this was the first time Rocky and Jeff hadn’t welded up their own cradles.

As you can see, the first new one works perfectly. Now Flutterby can be scooted around in the forklift ballet, too. At dusk last night, they moved us to our new place, right across from a huge live-oak tree that is full of the cutest little birds on the planet: Bluebirds! It looks like somebody painted their topsides with the same paint Barry used on our bottom. 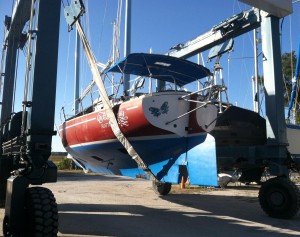 Flutterby in the slings with her new blue bottom paint 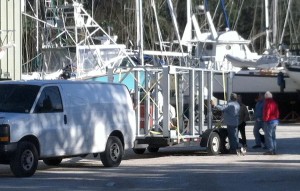 Two cradles arrived just at the moment when we needed one 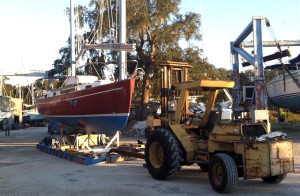 Flutterby on the new cradle with the forklift in the foreground. Now she’s easy to move and fits into a smaller space. 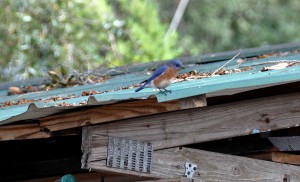 These charming little birds are the opposite of Flutterby, with blue topsides and rufous bottoms

10 thoughts on “Dancing in the forklift ballet”