I just closed the window, here on Camano Island, Washington. After leaving North Carolina, it’s a strange feeling to be cold in the summer. But I’m glad for the warm laptop on my legs, and I’m thinking of putting some socks on my chilly feet.

Last year, we drove across the country three times, slowly. We haven’t been on a plane since the end of 2007, so the flight on Wednesday from New Bern, North Carolina to Seattle was surreal and left me disoriented. Not to mention winded from that flat-out run through the Atlanta airport! I feel like I’ve been squeezed through a very tiny aperture and popped out in another universe. 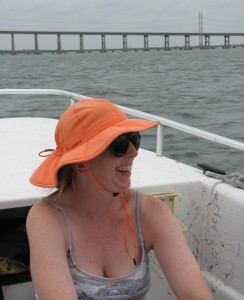 The differences between our North Carolina home and our Pacific Northwest home are vast — starting with the butter. Did you know that butter on the East coast and butter on the West coast is shaped differently? In the east, no matter what brand you buy, sticks of butter are long and skinny. In the west, they are short and fat. You have to have different butter dishes!

The sounds are different, too. In NC, I’m attuned to the sound of the Travelift and the crane, overlayed on the rhythm of cicadas on a hot day. I can identify many boats on the waterway by the sound of their engines, even before I see them. And the voices — I love listening to people speak with Southern accents, even if I can’t understand half of what they say (or, in the case of Randy, all of it). At the end of the day, Anique says she’s going “hame,” and it makes me wish I was born to talk like that. Here, the accents are flat, nonexistent. But I’m delighted to hear the call of the bird Barry and I call the “Sweetie, come here” bird. This afternoon, I napped on the grass — no fire ants or mosquitoes — and listened to the wind whispering like a person breathing in the top of 40-foot pines.

Then there are smells. Last weekend, we went out with Kenny and Nancy and Carlee in their skiff, and I breathed in the smell of the Atlantic Ocean and the marshes along the Intracoastal Waterway. I wanted to etch it in my memory, so I could compare it to the air here, where the tangy scent of fir trees fills the air like incense. 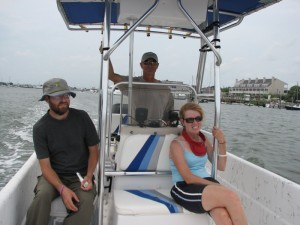 Sunday: Barry, Kenny, and Nancy on the boat with Beaufort in the background

We visited a beach today, Iverson Spit. We waded in the shallow water of Port Susan, ringed on all sides by blue, snow-capped mountains. There were a few other people on the beach, but their quiet energy was completely different from the beaches we visited in the past two weeks — Shackleford Bank, full of exuberant people on boats, and Atlantic Beach, with great big waves and surfers and swimmers. The hot, bright sunshine makes the air shimmer with heat. 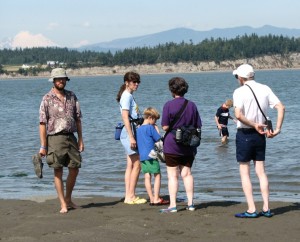 The character of the light is different, going from south to north. It’s 9 o’clock now, and it would be dark at the boat. We’d have put our mosquito screen in the companionway and turned on the lights. But here, I could still read outside, it’s so light. The twilight will last for another 90 minutes, as though the light is reluctant to go away.

Only then will we slip out to the hot tub. Under the starlight, we’ll listen to the sound of the wind in the pines and breathe their scent. And miss our dear friends in North Carolina, whose voices are like music, on the other side of the butter divide.

5 thoughts on “Crossing the butter divide”