The little weather thingie Barry installed on our Mac is great. Down at the bottom of the browser window, it displays a 5-day forecast in tiny icons. I thought they were pretty standard icons — a little cloud, a lightning bolt, a sun.

Until one day, sitting at the computer in North Carolina, dripping sweat on the keyboard, I saw a new one.

“Oh my God! The thermometer is on fire!”

Down at the bottom of the screen, there was indeed an icon showing a red thermometer with flames coming out of it. It very nicely illustrated what I was feeling — a day when I thought I might come around a boat and find Lucifer fanning himself, his pitchfork leaning up against a jackstand.

The thermometer-on-fire icon appeared a number of times in North Carolina, although I never saw the Devil. Too humid for him, I guess. But when we got to Seattle, the icons changed. Now they were back to clouds and sun, no lightning bolts or flaming thermometers. Until one day (you can guess where I’m going here), we looked at Forecastfox, which Barry had set to display Seattle weather, and…

“Oh my God! The thermometer is on fire!”

So what do you do in the Northwest when the thermometer is on fire?

We drove down to Yelm, where Tom took us to a special swimming hole. The only slight problem was the fact that we hadn’t brought bathing suits. Tom assured us that they wouldn’t be necessary; it was a private spot, and after all, it was Tuesday.

We drove through cow pastures, parked, and waded, clothed, into the Nisqually River. The banks were lined with evergreen trees, and the water rushed over rocks and little rapids and our ankles. It was totally cool and refreshing — but what was this? Around the corner came an overloaded rubber raft, packed with Mom, Dad, and the kids. It was followed by additional family members in inner tubes. Then a couple of guys popped out of the woods across the river with fishing poles. And another raft went by with two guys, whooping and hollering, and a cooler.

I had resigned myself to wading, when from behind us, yet another person appeared. This place was like Grand Central Station! This time, it was a woman in a sarong who said her name was Boopsie. I’m not sure if that’s her real name, or if that was a skinny-dipping alias. If so, I need a skinny-dipping alias.

Boopsie charged into the river and nearly lost her sarong in the current. Tom chivalrously helped her hang onto it. At least, I think that’s what he was doing. She made her way to a big rock, perched on it like a mermaid, and entertained us with stories of bathing-suit-free adventures in this spot. “I was here one time,” she said, “and I couldn’t hear anything but the rushing of the water on this rock. Well, along came a helicopter from Fort Lewis, super-low over the water, and before I realized what was happening, there I was, eye-to-eye with the pilot. He just hovered there, staring at my you-know-whats and giving me a big grin.” We also grinned and decided to join Boopsie in the river.

Of course, more rafts came by, but when they did, I submerged myself so they wouldn’t see any you-know-whats. Then a helicopter flew by from Fort Lewis, as low as he possibly could. Boopsie waved at the pilot. I sank down so only my nose was above water. Eventually, we got out, refreshed and covered in goosebumps. 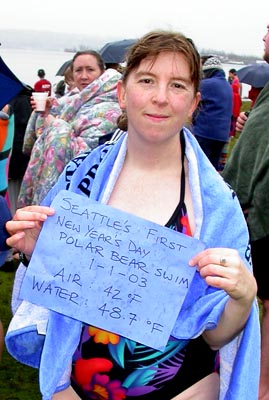 The following day, when we got up, guess what we found? The thermometer was on fire AGAIN. Luckily, we’d made plans to meet Brett and Ann and sail on their Thunderbird, Naumachia. This time, I took my bathing suit. Hard to believe this toasty giant bathtub was the same Lake Washington where I did my first polar bear swim on New Year’s Day 2003. The water temperature was in the 40’s that day, as you can see from the old photo.

And as a result of the trip on Naumachia, I have a bit of useful information for the next record-breaking hot day. On the west shore of Lake Washington, there is still a nude beach. At least, when we motored by, half the people there were wearing flesh-colored bathing suits. And there were no gawking helicopter pilots or people in rafts, only gawking people on sailboats. Now I’m set — if I can just come up with a skinny-dipping alias as good as “Boopsie.”

2 thoughts on “Couldn't stand the weather”