During a period of a couple months, I discovered that roosters don’t necessarily crow only in the morning, they crow all day. I thought it was charming. Other neighbors — the upscale ones — didn’t find it charming. They complained, and the flock was made compliant with Seattle law: Three hens, max, and zero roosters.

After that, the chickens were very quiet in their little coop, tucked behind some bushes and against the house in the front yard.

Given this experience, when we were invited to chicken-sit four chickens at a different friend’s house in Seattle, I was puzzled. “How can you have four?” “It’s OK. One of them is not a chicken,” was my friend’s response. This friend will remain nameless, because I’m afraid that the one that is not a chicken acts so much like a chicken, there might be a slight compliance issue. At the risk of being an accessory to the crime, I will not publish any names.

Except for the chickens’ names. First names only.

We arrived at the house for our chicken-sit instructions, and indeed, there were four creatures that looked like chickens. Two brown, two black-and-white. Mango, Frango, and Lucky are chickens. But Clam is simply the most chicken-like clam you’ll ever meet. There is no compliance issue. “This house has three chickens and a clam, Officer.”

Which one of these is not a chicken?

Like the other girls, Clam bursts out of the coop with a rush of flapping, flying energy when you open the door. Then she runs around the yard, clucking and looking for bugs. She digs up the dirt in the side yard, which may explain why the cucumbers are stunted. She hates being cooped up and wants to be top in the pecking order. She runs over and attempts to eat anything you toss on the ground, whether it’s a cucumber peel or a frisbee. She has been seen drinking from the infamous avian-nipple watering system. She produces award-winning volumes of chicken shit.

But lately I’ve noticed that Clam’s behavior is a little different from the others. Yesterday, she came over to me as I was standing on the patio. I thought she might be suffering from insecurity, being the outsider, so she was going to be more affectionate. “OW!” That was not affection, it was aggression! After she pecked me on the big toe, I punished the whole lot of them by vanquishing them from the backyard. And decided it was no longer a good idea to stand barefoot on the patio. 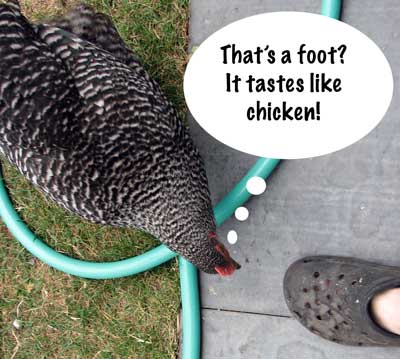 Today, I went out in the yard wearing clogs. Picking green beans, I suddenly felt a sharp pain in my heel. Clam had found the only exposed flesh on my foot and pecked it. Back she went, along with the others, into the Chicken Prison Exercise Yard. Barry seemed relieved. 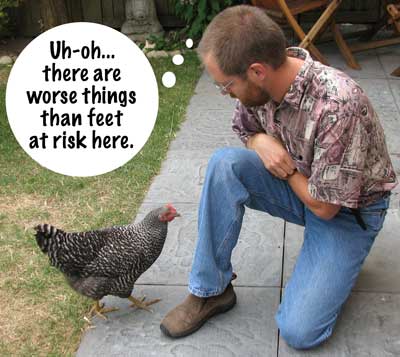 Right now, the chicken-sit is pretty easy; the chickens are too young to lay eggs. But what will happen when they start laying? Will Clam lay eggs, too? Or will she lay clams? She just might be the juvenile delinquent of the chicken yard, in which case, I hope she’ll straighten up and fly right. Otherwise, she’ll be out of here, and her owners — no, I still won’t tell you their names — probably won’t give a cluck. 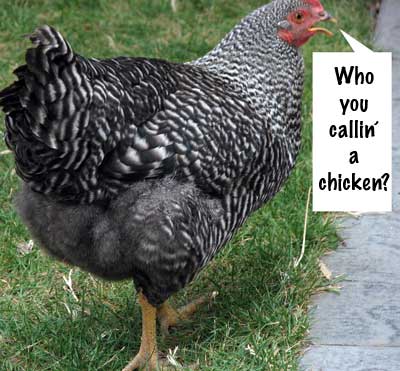 Clam emphatically proclaims, "I am not a chicken!"