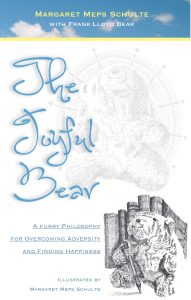 The Joyful Bear: A Furry Philosophy for Overcoming Adversity and Finding Happiness

In March of 2020, we (meaning Frank Lloyd Bear and Meps) started a new video project! We’re reading The Joyful Bear out loud and publishing it, a couple of chapters at a time, on YouTube. You’ll find that many of the chapters stand alone, and the videos are less than 10 minutes long.

If you’re new to the book, read on for more information about this important message for our time.

What is The Joyful Bear?

From the news release

VERO BEACH, FLORIDA. Margaret Meps Schulte’s new adult nonfiction book, The Joyful Bear, is intended as a concise nightstand resource, with suggestions for everything from overcoming insomnia and anxiety disorder to becoming a better listener. Featuring an unusual co-author, a stuffed polar bear named Frankie, the book’s unusual premise and pen-and-ink illustrations will bring joy to readers from all backgrounds.

The story is told in a series of conversations that explain Frankie’s “teddy bear philosophy,” bringing his humorous perspective to topics like mindfulness, unconditional love, and fear. Schulte attributes the success of her award-winning first book, Strangers Have the Best Candy, to the bear. “Frankie is a genius; he helped me break through writer’s block and depression,” she said. “Everybody needs to meet this quirky Buddha-bear.”

The Joyful Bear incorporates wisdom from such diverse sources as the Dalai Lama, Marshall Rosenberg, and Pollyanna. This human-bear collaboration will take its place beside The Taoh of Pooh and The Little Prince as a valuable guide to overcoming adversity and finding happiness.

Margaret Meps Schulte is the 2014 winner of the Bookseller Diagram Prize for Strangers Have the Best Candy. The U.S. expert on how to talk to strangers and make the most from chance encounters, she finds Happy Spots wherever she goes and often marks them for others. At ten inches tall, Frank Lloyd Bear is small for a philosopher, but large by teddy bear standards. He has traveled the back roads of the U.S. and Canada and has sailed thousands of miles aboard sailboats. The Joyful Bear is his first book.