The excitement is contagious when one of our boatyard friends launches their boat. Barry and I take note of who is in the slings, and if it’s someone we know well, we’ll go over and watch the proceedings.

A couple of days ago, Barry popped his head down into the boat and said, “Guess who’s in the slings now!” When I came on deck and looked across to the ways, it was Arima, the rubber boat.

Like us, she came from Hilton Head — Dan even stayed at the same marina while he was getting the boat cleaned up and ready for the trip north. He arrived at Bock a week before we did in May. For his summer boatyard escape, he crewed on a boat to Ireland, arriving back a day after we returned from our Burning Man trip.

At 35 feet, Arima is about the same size as Flutterby, but outfitted very differently. She’s a distinctive white sloop with green canvas and classic lines. And except for the side trips and surprises, Dan would have left long ago.

His first launch date was a Friday in June. It was the last day to be launched before the yard closed for a week’s vacation. I saw the Travelift pick him up, and as he touched up the bottom with paint, I snapped some pictures. It was Dan’s big day, and I thought he’d enjoy the photos later.

Dan tied up at the dock and said farewell to the boatyard employees. He planned to leave the following morning. That evening, Barry and I stopped by with a tiny (1-1/1×2-inches) homemade bon voyage card.

But it was not to be. Water rose in the bilge, and his bilge pump ran often to keep up. So he sat there, at the dock, waiting 10 days for the employees to return. When they did, they plucked him out of the water and put him a new spot.

Anyone else would have been despondent, but Dan took it in stride. He went to work on his cutlass (or is that cutless? nautical terms are weird!) bearing, laying on top of the engine with his head down in the bilge. It was uncomfortable, and I know he was frustrated, but he never complained. He’s a good example that way.

A week or so later, Dan told us he was done, and the problem was fixed. The Travelift picked him up and gently put him back in the water.

This time, water poured in so fast, they lifted him out almost immediately and blocked him up again. I could no longer restrain myself. I published a limerick about his travails and began calling Arima the “rubber boat,” because she bounces out of the water when you put her in!

Dan decided he was over his head, and hired the Bock crew to repair the now-cracked stern tube. Meanwhile, he helped out another boater, an Irishman named Steven. We’d heard that Steven and his nearly-mute Chinese girlfriend were going to launch the enormous mystery vessel in the sandpit “soon” and sail it to Ireland, just the two of them.

A couple of weeks later, I was walking by Arima on my way to the bathroom. Dan stopped me, saying “Hey, can you give me a ride to town next week?” “Sure, where are you going?” I asked. “Ireland!” he said, with a huge grin.

So Dan left his boat in storage and sailed off to Ireland, blogging the whole way. When he came back, it took less than a month to get ready to go.

Last week, when he said he was ready to launch, I chuckled. “He’s like the boy who cried wolf. I hope he’s getting a frequent-launching discount.”

I didn’t want to jinx him, so when Barry told me Arima was in the slings, I kept my camera to myself. About an hour later, on my way to the office, I walked by the boat, still hanging there. Dale was underneath, looking more serious than usual as he chewed on a toothpick. 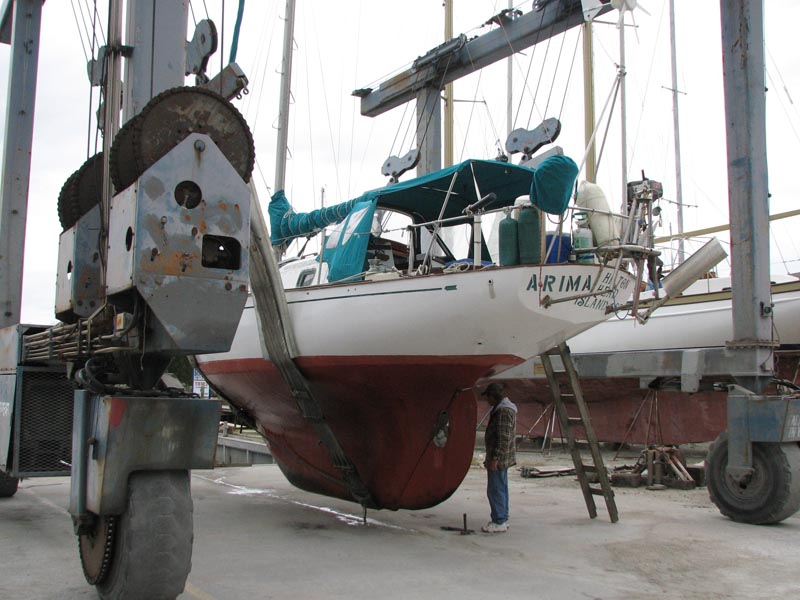 But what was this? The bottom was wet — the boat had been launched and pulled back out AGAIN!

This time, Dale and Larry and Randy were able to quickly fix two bad through-hull fittings, and Dan made it to the dock where he’d spent that first week in July. Since we know him better than when he first launched, we took a bottle of rum over and sat on Arima, enjoying the feeling of being on a boat that’s floating. “Woo hoo! A wake!”

The next morning, despite high winds and rain, Dan slipped his lines and motored away. At my request, he blew his horn as he left. We were down below, in the middle of a tricky and time-dependent fiberglass layup, so I could only peek out through the portlight. Barry managed to get a sticky, Tyvek-covered arm out the hatch for one last wave.

On my way past Dan’s spot, I took the wooden blocks and pads that had held up Arima, and the chains from his jackstands, and I wrote his name on the ground. A little memorial to the good he did here in the boatyard.

This morning, I have mixed emotions. I’m glad Dan is out there cruising, but I’m feeling sorry for myself. There have been many days when I was depressed and Dan cheered me up. Now I have to cheer myself up.

No, wait, who’s that driving into the boatyard? It’s another Dan! Dan Smith, who rescued us and took us to Raleigh back in December, has just come back for the first time in months. Here’s another laid-back Dan with a positive attitude — just what I needed right now.

Maybe my message on the ground brought him back from Raleigh? Instead of a farewell to Dan of Arima, it’s welcome to Dan of Funny Farm, and all the other positive and cheerful Dans — and people with other names — of the world.