I learned the art of subtle wave when I lived in rural South Carolina, the summer of 1984. On my one day off a week, my boss at the Beach and Tennis Club would loan me her car so I could buy groceries. Since the closest store was 15 miles away, I’d negotiated the loan of the car in my employment terms.

At first, I couldn’t believe my city-bred eyes. Every time I passed a car or truck on the 2-lane road, the driver waved at me. “Is something wrong? Why are they waving at me?” I wondered. By then, it was too late to wave back. I felt guilty. I was sure I owed them a wave.

When I started to wave back, I was doing it wrong. I was too energetic, waving with my whole hand. Eventually, I learned the technique. You hold the steering wheel at the top, and you don’t actually take your hand off the wheel to perform the wave. You just casually lift your fingers, keeping your thumb around the wheel. A little nod completes the split-second greeting.

All this comes back to me as I travel the Intracoastal Waterway, because this is a waving trip. All day long, I wave at people on passing boats, folks on shore, bridge tenders. When the days are long and our speed is slow, waving is an interesting distraction, a complex and subtle way to communicate without words.

Back in Georgia, traveling on a weekday in May, we might see one or two other boats, no houses on shore, and no bridges. Here in North Carolina, on a weekend in June, we have hundreds of boats, three or four bridges, and countless houses with docks. My arm could get tired with all this waving. 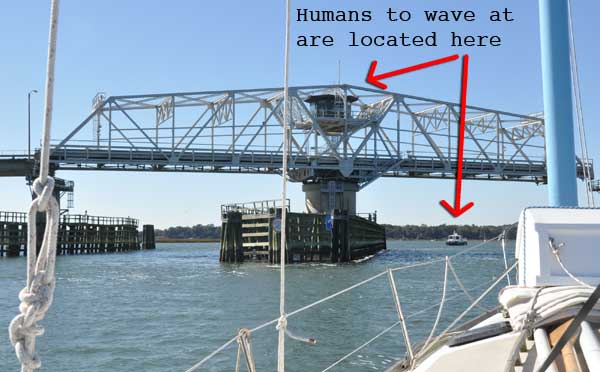 A primer on where to wave, using the Ladies Island Bridge for an example

In each encounter, there’s the question of who waves first, and who waves back. When I am about to be rolled by a big powerboat’s wake, I ignore any friendly waves by the boat’s occupants. I have an excuse — both my hands are occupied trying to steer Flutterby into their wake. I admit, that’s no excuse for my scowl.

When we’re passing a boat full of people, it’s interesting to see how many of them wave. Sometimes, the passengers look at us suspiciously when we wave. Then they notice their own captain waving, and they think, “Oh, it’s OK to wave.” So they wave, too, belatedly. Other times, the kids wave, but not the grown-ups. Or the grown-ups wave, and the kids look away, embarrassed.

I hesitate to wave at people whose have both hands occupied. Kayakers and fishermen, for example. I don’t want them to feel guilty for not waving back. The more inexperienced kayakers miss a stroke just to wave back at me. The savvy ones wave their paddles, mid-stroke.

Bridge tenders are another difficult one. Where the heck are they? I peer up as we go through the bridge, trying to figure out which reflective window might have a person behind it. Then I wonder if both their hands are occupied with bridge controls. Still, I wave gratefully and enthusiastically.

I could write a whole book about waving technique. I love the super-enthusiastic waves that we get from tiny kids and pre-teen girls. Sometimes they even use both arms. One of them, today, shouted “You’re from Seattle? I LOOOOVE Seattle!”

When I see people on the dock looking particularly relaxed and sipping drinks with little umbrellas, I give them a wiggly-finger wave, as if we know each other. That leaves them puzzled. Sometimes I use my Princess Parade wave — elbow, wrist, hand, elbow, wrist, hand. That leaves ’em laughing. But most waves are just a simple lift of the hand, palm facing out. It reminds me of kids playing Indians: “How!”

I’ve tried some other, non-verbal, non-waving communications with mixed results. My attempts to communicate “slow down” always fall on deaf eyes. But a few times, we’ve been treated exceptionally well by boats passing, and a bow of gratitude is universally understood. Thumbs-up is another universal gesture, meaning, “I like your boat!”

Sometimes, when Barry comes up to take his watch, I wave at him, too. It’s just because I’m waving at everyone else, why shouldn’t he get a friendly wave as well?

Today, I noticed a lot of two-finger waves. Is that a modified military salute, or a papal benediction? Luckily, I have never, ever on the water, seen the “one-finger” wave.

I hope that one is reserved for cars.

3 thoughts on “Catching a wave”